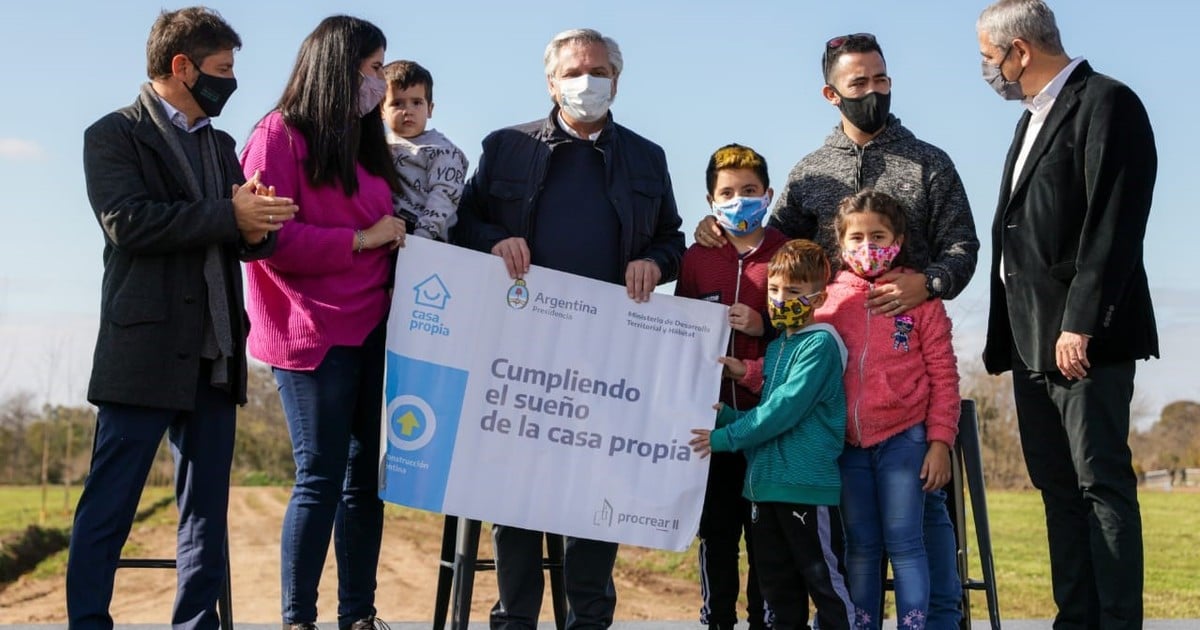 President Alberto Fernández affirmed this Tuesday that “many Argentines and Argentines claughed at the UVA credits ” that the government of Mauricio Macri granted for the purchase of houses, but “they agreed to a house and a lot of problems.”

“Someone believed that this (Argentina’s housing problem) was fixed with credits. Many Argentines and Argentines believed in those UVA credits and perhaps they had access to a house and a lot of problems,” said Fernández during an act in the Buenos Aires party of Mercedes.

In this framework, the head of state pointed out that the national Executive is “trying to solve” the problems of that line of credit, and added: “That is not the way, because these things are not decided only by the will of the markets. They are only decided if the State is present. “

Fernández led an act to announce a total investment of 77.2 billion pesos to advance in infrastructure works to generate 30,000 lots with services and in 11,800 loans for the construction of the first house on those lands.

The president was accompanied by the chief of staff, Santiago Cafiero; the Minister of Territorial Development and Habitat, Jorge Ferraresi; the governor of Buenos Aires, Axel Kicillof, and the mayor of Mercedes, Juan Ignacio Ustarroz.

During the activity, the President called “rescue the meaning of the state“, and he recalled that” for a long time they were talking about the State being a burden for the Argentines, but the State always appears to moderate inequalities“.

“Where inequalities appear, the State must side with the weakest to give them the strength they need and continue with their march,” he said.

Alberto Fernández inaugurated a work of urbanization in the Buenos Aires district of Mercedes. Photo: Presidency

Along these lines, he questioned the government of Cambiemos for not having delivered homes that were already built: “In this time of Government we have more than 10 thousand homes delivered, houses that were virtually finished in 2015 and someone decided not to deliver them to those who needed them, who knows why. “

“Perhaps they did not want them to remember who made them (in reference to Vice President Cristina Kirchner). Because of that petty attitude, what they did was deprive 10,000 families of their homes. That is what ethically becomes unforgivable,” he lashed out.

In addition, Fernández indicated that together with the Minister of Territorial Development and Habitat, Jorge Ferraresi, they are “working hard so that, as quickly as possible, there are land and houses for the Argentines who need them.”

When referring to the credits that the national government will grant for the purchase of houses in the Mercedes party, he pondered: “The house must be clarified that we are not giving it away. It is a credit that whoever faces the loan will pay with their effort and work. . A accessible credit, yes clearly, because this is not a business for the banks, it is a business for the people. “

In another part of his speech, the head of state expressed the “concern” of the national Executive regarding the “voracity” with which the coronavirus is advancing in “some places in the interior of the country.”

“We are concerned about the pandemic in the interior of the country where it is exhibiting tremendous voracity, so we cannot look from the outside without wanting to help those provinces that are suffering,” said Fernández,

In this regard, he anticipated that measures are being analyzed to ensure that “the new strain from India does not enter Argentina” and “ruin all the work we have done so far.”

“None of this would have been possible if we had not counted on the commitment of every man and every woman who has taken care of themselves and of the health personnel who every day put their face and faced the pandemic, despite the inclement that it has been the virus that mutates every day, “he concluded.

Urbanism in the province of Buenos Aires

The Buenos Aires governor, Axel Kicillof, affirmed this Tuesday that the province grew “anarchic and unjustly“, since” whoever had more resources, privatized the land and access was only guaranteed by money. “

“Those who did not have (money) stayed on the side of the road, in unsuitable places, flooded, without basic social infrastructure,” said Kicillof, and stated that this generated “private neighborhoods on the one hand and settlements on the other.”

In that sense, the provincial leader explained: “These are things that if not coordinated, harm everyone and go wrong. So, we take the bull by the antlers and start an ordinance.”

“The gated community developers were the first to come forward and realize that it was a job for everyone,” he said.

Finally, he affirmed that “these are not times to play with hatred, but rather to unite with solidarity, be cooperative, convene communities and accompany governments in this challenge that we have as humanity: emerge better from the pandemic.”