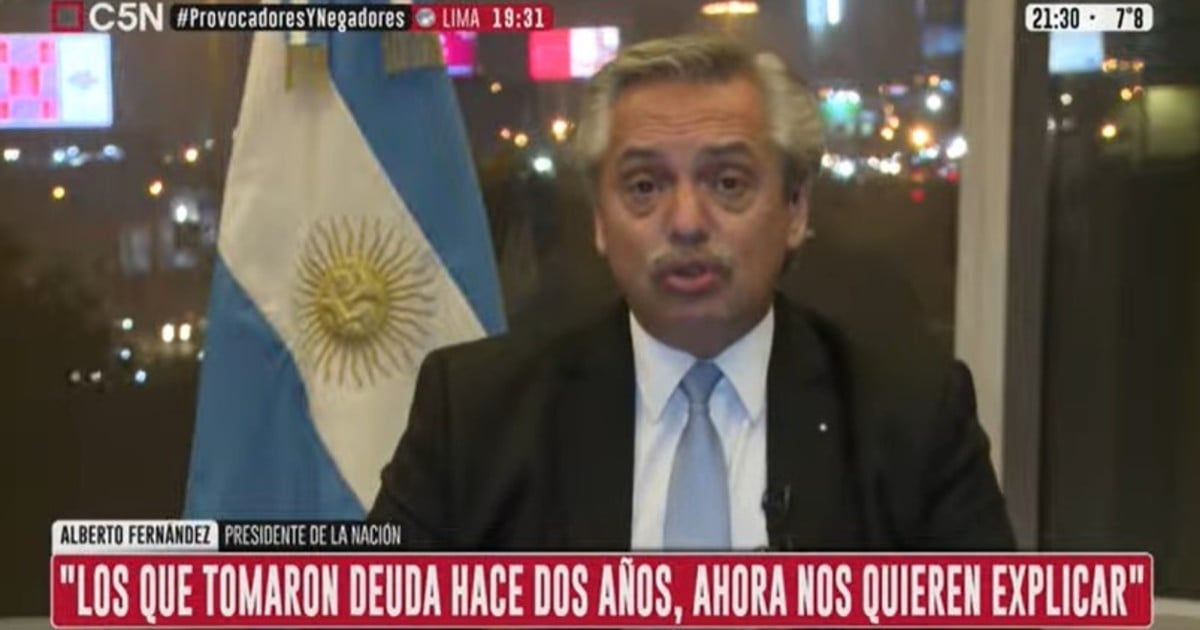 From Peru – where he attended the presidential inauguration of Pedro Castillo – Alberto Fernández assured that “all those who are candidates must leave their positions“in the Cabinet.

He thus made reference to the closing of lists last Saturday towards the STEP in September. In this sense, the President announced the departure of Agustín Rossi, Defense Minister; Daniel Arroyo, from Social Development; Victoria Tolosa Paz, head of the Federal Council for Social Policy; Enrique Cresto (administrator of the National Water Works Sanitation Agency) and Martin Gil, Secretary of Public Works.

“It is an ethical rule that I want to preserve. The loss of Daniel is very great, also the loss of Agustín, of someone like Enrique Cresto, the loss of Martín Gil, the loss of Vicky Tolosa Paz. But it’s the rule that I set myself“, said AF in dialogue with C5N.

When asked about the rumors about Arroyo’s replacement, he said: “I have the name but when I return to Argentina, I will speak with whoever is concerned and we will announce it. “

As Clarín reported, Juan Zabaleta– current mayor of Hurlingham, close to the President – would be Arroyo’s replacement in the Ministry of Social Development.

In this way, the head of state would add the third mayor in the cabinet: Gabriel Katopodis and Jorge Ferraresi are already there. It also prevents the landing of another leader of the hard core K.

Arroyo signed in position 12 on the list of candidates for national deputies of the Frente de Todos in the province of Buenos Aires and that, according to sources from the Casa Rosada, had insisted on leaving the ministry, to a large extent, due to the internal subdivision.

The concern of the social movements about the arrival of a mayor of Greater Buenos Aires is added to the closing of lists of the weekend that exposed the tension within the government coalition.

In the case of Agustin Rossi, currently at the head of Defense, will be a candidate for senator for Santa Fe since he managed to reunite in his candidacy the Peronism of Santa Fe. A day before the closing of the lists, Rossi showed up with Alejandra Rodenas, deputy governor of Santa Fe

Victoria Tolosa Paz signed as the candidate for deputy of the Frente de Todos who will head in the Province of Buenos Aires.

The official Enrique Cresto, for his part, heads the list of the Front for Victory in Entre Ríos, while Martin Rodrigo Gil leads the official list of deputies in Córdoba.

“We govern, they make statements in the media”

After the closing of lists for the weekend towards the PASO, Fernández said that he did not “impose” candidates within the Frente de Todos, but that it was the product of agreements.

“Nobody imposed anything, we agreed, we all won and that is what matters most,” said the president.

AF, in that context, pointed hard at Together for Change: “We govern, they make statements in the media.”

.It was when he alluded to the vaccination campaign: “We already have 73% of Argentina with a dose of the vaccines. It is clear that we have the difficulties that everyone has to get the second doses and others, but we have been able to advance a lot. With a lot of effort and in solitude “.

He continued: “No one from the opposition told me that they would stand next to me to get the vaccines. Nobody. One never came and told me that he could make me a contact, so much so that they are close to the first world … Nobody. Alberto Fernández spoke with the president of Moderna and Pfizer, no one else. Nobody brought me the solution. The same happened with AstraZeneca, with Sputnik, with Sinopharm and the same happens with Cancino. “

Praise: “I did not want to provoke anyone by kissing the Madrid shield”