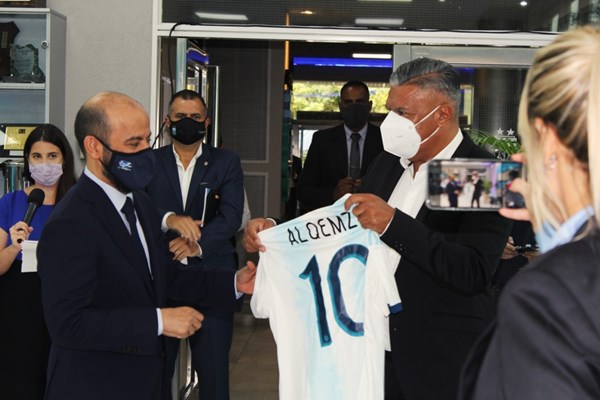 Saeed Abdullah Al Qamzi, Ambassador and Extraordinary Commissioner of the Emirates in Argentina, called for the need to benefit from the new Argentine experiment, which was launched in 50 countries around the world, and it is the technology of the Union’s Technological Institute, known as “Ava”.
In special statements to “Al-Ittihad” from Buenos Aires, he said: I was invited by Claudio Tapia, president of the Argentine Federation, to see the wonderful technology, and I knew that there is activity for this academy that is spreading globally in Dubai, and I found great eagerness from the Argentine Federation to cooperate with the Football Association, and I am ready Completely to do this role, if the Football Association asked me this aspect, so that we can make the most of the benefit that serves Emirati football, especially in the field of the age stages, and to develop the skills and capabilities of future players.
Al-Qamzi said: He spoke to Tapia about strengthening the partnership with the Football Association, stressing that Argentina intends to be the starting point for it, through the Emirates, and the President of the Argentine Federation assured me that they saw a lot of potentials that can be built on, so that Abu Dhabi and Dubai are the main pillar The Middle East region, for the “Tango Experience” that receives great global attention for the high technology used in building future generations in football.
He added: We are currently talking about artificial intelligence, which is a reality in our country now, and Argentine technology depends on this approach as well, and therefore I see that it fits perfectly with the mentality of the Emirati player who wants to develop his capabilities and capabilities in the stadiums, and harness it to develop their levels.
He said: I watch Emirates football, despite the distance and the difference in timing, and I am a fan of the first class for my country, and at the same time, I love Manchester City, in addition to that, my heart is “purple”, and the football culture in Argentina is at its highest, and they play ball in every way. A place, in addition to polo, and I have only been there for two months, and I also follow Argentine football, through Boca Junior and River Plate, and we are waiting for the elimination of the Corona virus, so that we will be in the stands of Argentina’s stadiums to watch the fun of the ball.

Walk through an endless airport in Interminal

George Floyd’s death: new videos show how the police took him out