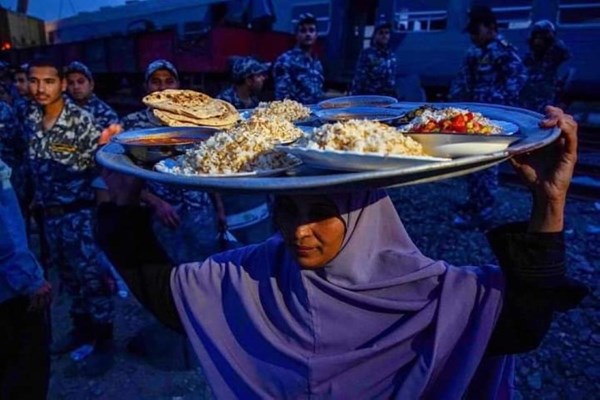 Ahmed Atef (Cairo)
They were destined to be the first to see and hear about the accident of train No. 949 heading from Cairo to Mansoura. They are the people of the small village of Kafr al-Hessa overlooking the Egypt-Alexandria Agricultural Road parallel to the railway line in Qalyubia governorate, and whose population is about 6 thousand people, according to the village mayor. Hajj Majid to “Al-Ittihad”.
Hajj Majed revealed to “Al-Ittihad” that they had only done their duty, and that the process of hosting the injured and wounded was carried out in an unorganized manner and was from all the village houses. If they could do more, they wouldn’t be late.
The mayor of the village in the Egyptian governorate of Qalyubia confirmed that many of the injured and survivors calmed them down from the shock, provided them with water and juices, then drove them to the nearest car park, pointing out that they found a baby in the accident and handed him over to the competent authorities.

For his part, Ibrahim Shaheen, a resident of the village, said that he asked the people of his house to prepare the largest amount of food and drink after the approaching evening call to prayer and the time for breakfast and to present it to rescue teams, journalists and officials present at the scene of the accident.
Shaheen told “Al-Ittihad”: Cars loaded with water, juices, prepared and cold foods arrived at the site of the accident from the “Al-Abed” mall on the Egypt-Alexandria Agricultural Road to present them to all who were present, with the launch of the Maghrib azan cannon.
Shaheen pointed out that they always witnessed accidents on the road, but for the first time they saw a terrible accident in this way, especially as the scene of deaths and injuries was very horrific, explaining that he received one of the injured whose hand was amputated as a result of the accident, and he helped him ride the ambulance.
The small village is characterized by a number of cafes and restaurants overlooking the highway and the railway line, and they are used to breakfast fasting people passing in front of their shops and homes.
Khaled Al-Mogawel, one of those who helped take food out of his home as well as in rescue operations, explained to Al-Ittihad that he was the first to arrive in the accident, especially since the train dust had reached a height of about half a meter above, and he helped rescue and collect the body parts of the dead.
Khaled pointed out that the Public Prosecution team emptied the cameras of shops and cafeterias to see in detail what happened to the train before and after the accident, pointing out that the middle of the train was diverted by turning it, which made 4 cars separate from the train.
On Sunday, the Egyptian Ministry of Health and Population announced the death of 11 people and the injury of 98 others in a train derailment accident in the city of Toukh in Qalyubia Governorate, and the ministry indicated in a press statement that 14 cases among the injured had been discharged from Benha Teaching Hospital and Qalioub Specialist Hospital, while the Public Prosecution announced Al-Masria said in a statement, a team of its investigators went to inspect the site.
The Egyptian Railways Authority said, in a statement, that “during the passage of the tourist train 949/3209, heading from Cairo to the city of Mansoura, and at 1:54 pm, 4 cars of the train fell at the entrance to the Sandanhur station (Toukh), and the grounds are being stopped. the incident”.