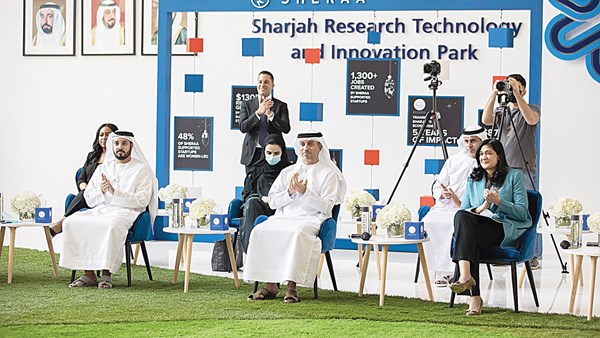 The Sharjah Entrepreneurship Center (Sheraa), at its headquarters in the Sharjah Research, Technology and Innovation Park, recently hosted His Excellency Dr. Ahmed Belhoul Al Falasi, Minister of State for Entrepreneurship and Small and Medium Enterprises, during an official visit, during which he was introduced to the work environment of the booming startup companies in the Emirate of Sharjah and the efforts made to advance the economic system in general.
The visit, which was attended by about 40 entrepreneurs and representatives of government and private agencies, comes within the framework of the ministry’s efforts to support the growth of the entrepreneurship sector in the country, and to consolidate its position as one of the world’s largest attractive destinations for start-ups. (Sheraa) to serve the trends of supporting youth projects and ideas, and ambitious company founders, with the aim of launching various initiatives and programs that enrich the process of diversity and economic growth in the country.
During the visit, His Excellency witnessed the launch of the impact assessment report of the Sharjah Entrepreneurship Center (Sheraa) entitled “Five Years of Impact Creation 2016-2020”, which reviews the growth of the center and its vital role in the process of promoting sustainable and innovation-based entrepreneurship in Sharjah.
His Excellency Al Falasi listened to a detailed explanation of the content of the report presented by Najla Al Midfa, Executive Director of Sheraa Center, who indicated that the report provides information on the growing role of Sheraa Center as a fundamental pillar of the entrepreneurship system in the United Arab Emirates, as the Center supported more than 17,000 people are change makers in various sectors, which has strengthened Sharjah’s position on the global entrepreneurship map.
Al Midfa pointed out that there are 114 startup companies under the umbrella of Sheraa that have succeeded in providing 1,300 job opportunities over the past five years, 48% of which are owned by women, which contributed to supporting the emirate’s efforts to achieve economic diversification. It provided more than 3000 hours of training in cooperation with a number of the most prominent stakeholders in the entrepreneurship sector.

A platform for entrepreneurs
Najla Al Midfa, Executive Director of Sheraa Center, said: “We are honored that the Sheraa Center is a platform that brings together the community of entrepreneurs and founders of startup companies operating under the umbrella of the Center to participate in an open dialogue with His Excellency the Minister of State for Entrepreneurship and Small and Medium Enterprises, with the aim of discussing the entrepreneurship system. At the state level, where such meetings reflect the goals and vision of the center in supporting the founders of startups and enabling them to contribute to building a sustainable future in the country and the region. This meeting also gave us the opportunity to present the most important achievements of the (Sheraa) center during the past five years.”
Al Midfa added: “At Sheraa, we continue to strive to elevate the entrepreneurship system in the emirate, embodying the vision of His Highness Sheikh Dr. Sultan bin Muhammad Al Qasimi, Supreme Council Member and Ruler of Sharjah, to enhance the emirate’s position as a friendly destination for entrepreneurship by attracting projects and owners of small businesses. and medium ».