Al Falasi is injured in the arm, loses his boat and refuses to give up his ancestral profession 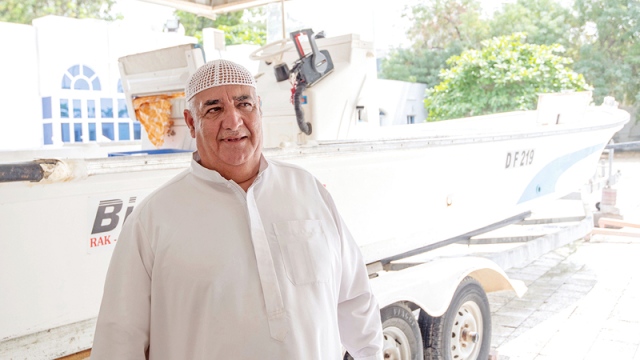 Citizen Al Nukhathah Issa Muhammad Saif Al Falasi refused to give up the fishing profession despite his injury in the arm and the loss of his boat, and the Ministry of Community Development, with the support of Abu Dhabi Islamic Bank, intervened to solve his problem and provide a new boat that would enable him to return to work.

The ministry told “Emirates Today” that as soon as it became aware of the Al Falasi problem, it immediately moved to support him, emphasizing the importance of work as a human value and an ideal means of providing income, especially as he works in fishing, the profession of parents and grandparents, which must remain in a position of pride and respect for the people of the Emirates.

Al Falasi (58 years) narrated his story to “Emirates Today”, saying that the boat he uses for fishing capsized at sea, and the water entered the machine and destroyed it completely, and after his return he tried to fix the machine with his hand, and one of the passers-by saw him complaining about his concern for himself, so he talked to him and got acquainted with him. The reason for his sadness then he photographed him, and he posted a video of him on social media, talking about how sad he was after his boat lost his livelihood.

Al Falasi asserted that riding the sea reassures him and heals him from the worries of the world, and that he cannot give up the profession of fishing his only source of livelihood, adding that he was injured in his arm and doctors had to plant metal pieces inside it, and despite that he did not stop fishing, and refused to live dependent on the state, especially as he He was raised on self-reliance, and he brought his children himself.

He added that no matter how humble the return of his profession is in front of the difficult and costly responsibilities of life, he is proud of his profession that he learned from his forefathers, and it will remain a priority for the continuation of his life, pointing out that no matter what positions and centers in life a person attains, he does not shy away from his past or be ashamed of the profession of “smash”, that is. The man who lives by selling the fish he catches.

He recalled his childhood days when his school was near Al Shindagha, saying that he used to take the fishing hook with him in the school bag and as soon as work was over until he fled to the sea and sat there for hours, stressing that he loved fishing and got used to the company of the sea since he was six years old, where he found There is refuge and safety.

For her part, the Director of the Family Development Department, Alia Al-Joker, told «Emirates Today» that she paid attention to the words of Al Falasi through a video posted by one of the activists on social media. Immediately, we contacted Abu Dhabi Islamic Bank, which is one of the ministry’s strategic partners in implementing community initiatives and supporting humanitarian projects, and within hours the bank responded and pledged to present a new boat for Al Falasi.

She added that Al Falasi is a humanitarian model to be emulated, and the ministry is working to build and support the capabilities of the Emirati man to be independent and financially self-sufficient through effort, work and insistence on self-realization, and not relying on financial aid as a source of income, stressing that the ministry also wanted, through the support of Al Falasi, to reaffirm the necessity of Youth and society respect for the ancestral profession, as it is an essential part and component of the country’s history.

The Joker affirmed that Al Falasi deserves support because he is proud of his profession and has pride in his history and the history of his ancestors, pointing to providing support to him in conjunction with the celebration of the International Day of Happiness that falls on March 20, which was recognized globally to celebrate happiness as a basic means in supporting the elements of the effective and successful completion of social and economic development projects. .

The ideas of Al-Nokhathah Issa Muhammad Saif Al Falasi express awareness and a lot of depth and sophistication despite the simplicity of his vocabulary and his modest abilities to express it, for example he carries all the waste resulting from the fishing and sale process with him to the house to dispose of it himself, and ensures that the sea or the beach is not polluted, and he does not leave it to anyone else to clean His place, because that is not ethics, as he put it.

Al Falasi said: “I despise myself and not demean my country, the shame of my country,” meaning that he is ready to carry garbage and garbage and pollute his clothes, boat and home, but he does not accept to pollute the beaches and streets of his country.

The Regional Director of the Dubai Region at Abu Dhabi Islamic Bank, Nasser Muhammad Al-Abdoul, said that the bank is committed to supporting community development projects and considers them part of its duties in assuming its responsibilities towards society and supporting sustainable human development goals by supporting individuals and institutions in achieving those goals.

He expressed his pride in the “Falasi”, which represents a model for the struggling father, and he had to be supported to continue work and life in a way that pleases him and loves him.

Al Falasi has loved the sea since childhood, and feels reassured and at ease from the worries of life.

PlayStation 5 receives its first major update: all the details

Chekunkov spoke about the development of the “Far Eastern Hectare” program