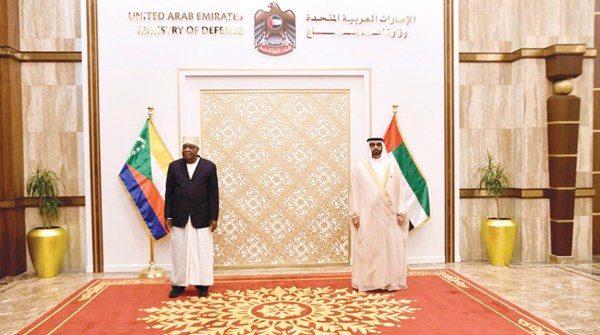 His Excellency Mohammed bin Ahmed Al Bowardi, Minister of State for Defense Affairs, received – in his office yesterday morning – His Excellency Youssef Mohammed Ali, Director of the Office of His Excellency the President of the United Republic of the Comoros in charge of the Ministry of Defense and his accompanying delegation, in the presence of His Excellency Lieutenant-General Hamad Mohammed Thani Al Rumaithi, Chief of Staff of the Armed Forces, and Matar Salem Al Dhaheri The Undersecretary of the Ministry of Defense, and a number of senior officers and officials of the Ministry. During the meeting, they discussed bilateral relations between the two countries and means of joint cooperation in the military and defense fields, and exchanged views on a number of regional and international issues of common interest. His Excellency Youssef Muhammad Ali praised the continuous efforts of the United Arab Emirates in combating terrorism, confronting all forms of violence and extremism, and its constant endeavor and commitment to strengthening partnership and cooperation relations with its friends and allies, noting the aspiration for more coordination and cooperation in all fields, in order to enhance common interests.