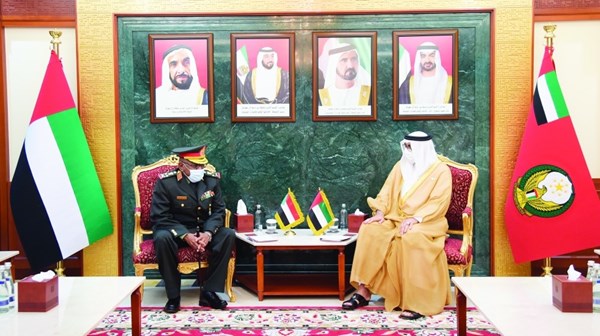 His Excellency Mohammed bin Ahmed Al Bowardi, Minister of State for Defense Affairs, received, in his office yesterday, Lieutenant-General Muhammad Othman Al Hussein, Chief of Staff of the Sudanese Armed Forces, and his accompanying delegation, who is currently on an official visit to the country, in the presence of His Excellency Lieutenant-General Hamad Mohammed Thani Al Rumaithi, Chief of Staff of the Armed Forces Matar Salem Al Dhaheri, Undersecretary of the Ministry of Defense, and a number of senior officers and officials of the Ministry.
During the meeting, His Excellency stressed the strength, depth and distinction of relations with the sisterly Republic of Sudan, based on the historical dimension, mutual brotherly interests and military, economic and development partnerships, which serve comprehensive development in both countries, as well as their cooperation in issues of concern to the Arab region.
During the meeting, they discussed the historical and strategic bilateral brotherly relations between the two countries, and ways to support and develop them in a way that enhances the common interests of the two countries, and their quest to develop cooperation in all fields, especially in the military and defense fields. They also exchanged views on a number of regional and international issues of common interest.
For his part, the Chief of Staff of the Sudanese Armed Forces expressed his happiness to visit the UAE, stressing his country’s keenness to strengthen its brotherly relations with the UAE, for the good and interest of the two brotherly countries, expressing his appreciation for the great role played by the UAE in supporting Arab causes, and maintaining Security, stability and identity of the region. During the meeting, the Chief of Staff of the Sudanese Armed Forces praised the relations between the two countries, describing them as deep and rooted, praising the pioneering and honorable roles that the UAE has played in the region and the region and its support and assistance to the Republic of Sudan in various fields.
The two sides affirmed the two countries’ continuous endeavors to enhance and develop relations of cooperation between them in all aspects. They also stressed the importance of concerted Arab efforts and coordination with the international community, to restore security and stability in a number of Arab countries, build their national institutions, alleviate the suffering of their people, and combat violence and extremism, which they practice and implement. terrorist organizations.
Lieutenant-General Hamad Mohammed Thani Al-Rumaithi also received Lieutenant-General Muhammad Othman Al-Hussein, Chief of Staff of the Sudanese Armed Forces. The Chief of Staff of the Armed Forces welcomed the Chief of Staff of the Sudanese Armed Forces, and reviewed with him the existing fraternal relations of cooperation between the UAE and the sisterly Republic of Sudan, ways of strengthening them, and the development they are witnessing at various levels, especially with regard to military coordination and defense cooperation between the two brotherly countries. The meeting came within the framework of continuous consultation and coordination between the brothers, which supports communication between the two countries and establishes advanced relations in the fields of military cooperation.

Due to Cristina’s electoral pragmatism, La Cámpora is heading to sacrifice seats in the Senate

Athletics Finnish athletics break records and travel in large numbers to the Olympics: “The best tip for women’s memory”