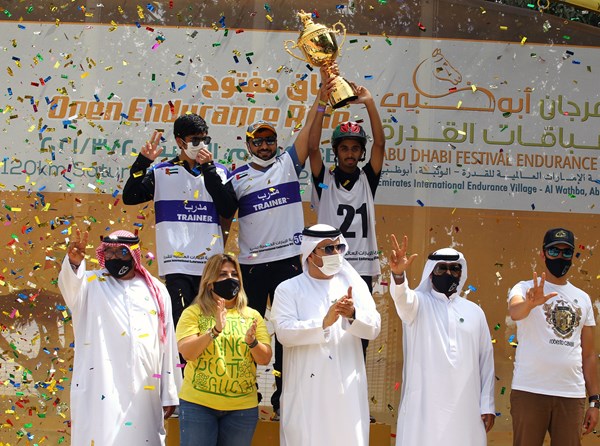 The rider, Rashid Al Ameri, on boarding “Mario Nahala” for the Al Reef stables “Al Ain”, won the title of the main race for a distance of 120 km, which was held today at the Emirates Global Resilience Village at the end of the Abu Dhabi Endurance Festival, which also included a women’s race and another for the private stables.
The champion awarded the Al-Rif Stables its first title of the season after a strong performance in the race, which saw the participation of 120 riders and riders, covering the total distance with a time of 4:17:28 hours and an average speed of 27.96 km / hour.
The knight Ali Muhammad Al Hosani came second on horseback «Asfa Naturag» for the commandos stables, recording a time of 4:17:49 hours, while the knight Saif Ahmed Al Mazrouei came on board «Avner La Majuri» for the stables «MRM» and scored 4 : 17:50 hours.
After the end of the race, Major General Dr. Ahmed Nasser Al Raisi, Chairman of the Equestrian Federation, and Musallam Al Ameri, Director General of the Emirates Global Resilience Village, crowned the winners, in the presence of Mohammed Al Hadrami, Director of Events in the Village, Abdul Rahman Al Rumaithi, Village Supervisor, and Lara Sawaya, Executive Director of the Races Festival of His Highness Sheikh Mansour bin Zayed Al Nahyan.
For his part, Musallam Al-Ameri thanked His Highness Sheikh Mansour bin Zayed Al Nahyan, Deputy Prime Minister and Minister of Presidential Affairs, for the great support provided by His Highness to endurance sport, for the races hosted and organized by the Emirates Global Endurance Village in Al Wathba.
Al-Ameri praised the great success achieved by the Abu Dhabi Festival in its three races, which represented the conclusion of the season after the village hosted 11 races, all of which came out in the most wonderful form, organizationally, technically and logistically.
He continued: We congratulate the winners in all races, and thank them for their distinguished cooperation with the organizing committees and the work team, and we hope that success will continue in the coming seasons with the same spirit and performance from everyone, indicating that the races evolve from one season to another with the great support that every family of this sport finds in Al Wathba. .
For his part, Abdul Rahman Al-Rumaithi, the village supervisor, thanked and appreciated the “We are all Police” department of Abu Dhabi Police for their effective contribution to the success of the season’s races.

The calvary of the mythical singer of the first Iron Maiden

Locked-down Spaniards seethe with envy as Germans flock to Mallorca