Al Ain Film Festival kicks off in its third session 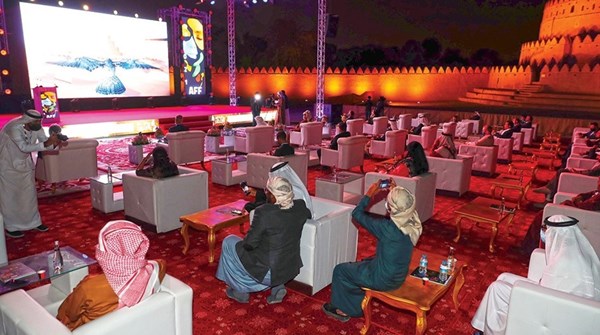 Yesterday evening, the activities of the third edition of the Al Ain Film Festival, which is held under the patronage of His Excellency Sheikh Sultan bin Tahnoun Al Nahyan, Member of the Executive Council, and in the presence of His Excellency Sheikh Dr. Saeed bin Tahnoun Al Nahyan, began.
For 5 days, the festival celebrates local, Gulf, Arab and international cinema at Al Jahili Castle in Al Ain, as it displays 85 films in its third session, and its various competitions offer a rich combination of films from the UAE, the Gulf and the world.
The festival celebrated the world premiere of the Algerian film “Heliopolis” at the opening ceremony, challenging the exceptional circumstance that the world suffers due to the repercussions of the “Corona” crisis, so that the “seventh art” tree remains on fire, through full commitment to precautionary and preventive measures and physical distancing, to preserve the safety of the attendees and guests. The festival, which continues until January 27.
His Excellency Sheikh Dr. Saeed bin Tahnoun Al Nahyan welcomed the guests, filmmakers and attendees, praising the festival, which opens its third session, with the Algerian film “Heliopolis” in its global presentation in terms of organization and its setting up in this difficult circumstance.

“Al Ain Cinema” celebrates in its third session the presentation of 12 films within the “Cinema of the World” program, as the festival succeeded, despite the exceptional difficult circumstances due to “Corona” and its impact on productions last year, in attracting a group of the most prominent cinematic works from world cinema, after the conclusion of an agreement. With the Office of the “European Union Mission”, as a group of European countries expressed their willingness to cooperate with the festival, with the aim of exchanging experiences and cultures in the field and providing an opportunity to watch various films of high artistic value for the Emirati and Gulf audiences, including “Homo Novus”, “Ilisla Menma” and ” The Boat, “Summer Survivors”, “A Million Soldiers” and “Mr. Jones.” Survey Do you feel invisible at work? Answer the HS questionnaire

Axel Kicillof pointed out against the management of Change in Security: ‘When we took office, the Buenos Aires Police had two dogs’