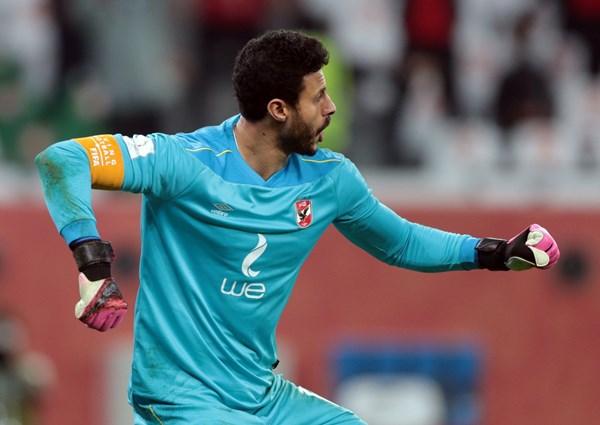 In a fiery atmosphere and a local whistle, the Egyptian football poles Al-Ahly, the defending champion, and their runner-up, the current leader, Zamalek, will meet tomorrow (Sunday) at the Cairo League Stadium, in the summit match No. 121 and postponed between them from the fourth round.
Al-Ahly was slapped on the eve of the match after announcing that its international goalkeeper, Muhammad al-Shennawi, 32, had been infected with the Corona virus, in order for Ali Lotfi to be his substitute. the past.
After a number of Zamalek players left the text and received penalties from the Disciplinary Committee of the Football Association, which were rejected by the management of the two clubs, Zamalek considered it exaggerated and Al-Ahly was insufficient.
This is in addition to the crisis of assigning the game management to an Egyptian referee team, for the first time since their confrontation in the second round of the 2018 season, which Zamalek won 3-1 and managed by international Mohamed Al-Hanafi, while there were wholesale objections from both sides to his decisions, and today’s meeting is directed by Mahmoud Al-Banna.
Ahmed Mujahid, head of the tripartite committee in charge of managing the Football Association, had decided to seek the help of Egyptian referees to manage the match, in a decision that the two clubs refused through official statements, calling for the assistance of a foreign referee team.
However, Mujahid insisted on his decision and in the end the management of the two clubs gave in with reservations, after the efforts of the head of the tripartite committee to hold a meeting between Mahmoud Al-Khatib, Al-Ahly president, and Emad Abdel Aziz, president of Zamalek, with the aim of calming the atmosphere between the two clubs before the confrontation.
Zamalek, the leader of the competition, is seeking to win to hit several birds with one stone, and his French coach Patrice Carteron indicated to maintain the top of the league, achieving a moral victory over the traditional rivals and seeking to win the title absent from the club’s treasuries since the 2015 season, after the early exit from the African Champions League.
Zamalek tops the league with 33 points from 14 games, 4 points ahead of Al-Masry Al-Borsaidi, who has played four more games, while Al-Ahly ranks fourth with 27 points from 11 games.
Zamalek does not suffer from any absences in its ranks, except for the absence of Imam Ashour and Ahmed Eid, after they were suspended by a decision of the Disciplinary Committee.
“The match is not easy, and we must deal with great caution and not look at the absences that the opponent suffers,” Carteron said in a lengthy lecture to the players, revealed by the official Zamalek website.
Osama Nabih, the general coach of Zamalek, confirmed the high morale of his players before confronting Al-Ahly, after restoring the tone of local and African victories, despite the exit from the Champions League.
Nabih added in a press statement, “There is great determination among the players to achieve a positive result against Al-Ahly and to maintain the top of the league.”

On the other hand, South African coach Pitso Mosimane, Al-Ahly coach, is facing a major crisis, due to the absence of a large number of his basic elements due to injury, and for being forced to rely on a number of substitutes.
To El-Shennawi, who suffers from “Corona”, the Tunisian Ali Maaloul, the left-back, who has been suffering from a rupture since his participation against Bayern Munich in the World Cup two months ago, will be absent from the Al-Ahly squad.
Midfielder Hamdi Fathy will also be absent due to an injury to his hand with the Egyptian national team, along with Mahmoud Wahid, Badil Maaloul, Mohamed Hani, right-back, Nigerian Junior Ajay and defender Yasser Ibrahim.
Musimani intensified his theoretical lectures to the players on the plans and style of facing Zamalek, and said in press statements after the victory in the Egypt Cup: “The Zamalek meeting does not need motivation, because we will face one of the best teams in Africa, but we have one goal, which is to win in order to seek to regain the lead. Ranking and preservation of the title ».

Editorial Päijänne and Saimaa got into the binoculars of mining companies

Nadal, before the young Sinner