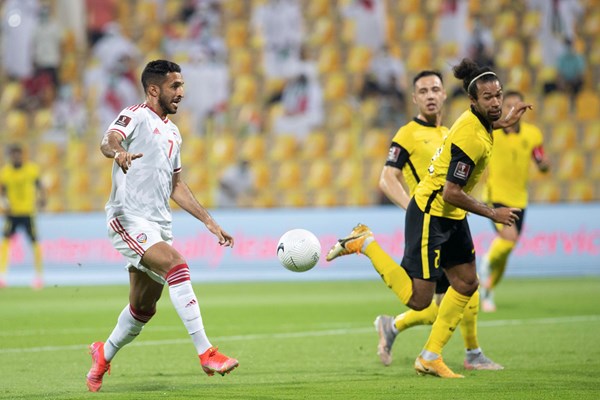 Our national team defeated Malaysia by four without a response through Ali Mabkhout and Lima, in the match that was held at Zabeel Stadium in Dubai in the Group G double qualifiers for the 2022 World Cup and the 2023 Asian Cup, to raise our team to 9 points to renew its dream of booking a seat to the Asian finals. In China, and a seat among the continent’s top players who will compete to reach the 2022 World Cup, the “white” needs to win the remaining three matches in order to serve itself. In the same group, Indonesia scored its first point in the qualifying campaign with a positive draw with Thailand 2-2 in Group G on Al Maktoum Stadium in Dubai, our team is equal in points with Malaysia and Thailand, and Vietnam tops the group with 11 points. Our team will meet in the next round against Thailand on Monday, then Indonesia on June 11, and Vietnam in the last round on June 15. And the wonderful painting was completed in the confrontation with the return of our fans to the stands after the pandemic of the new Corona virus, with the doors open to the fans by 30%, according to the requirements of adhering to the precautionary measures. The team’s third victory in the qualifiers came with the first goal by Ali Mabkhout in the 19th minute, and in the second half, Lima translated opportunities by scoring the second goal for our national team against Malaysia in the 83rd minute, and in stoppage time, Ali Mabkhout scored the second goal for him and the third for our team, to enter Mabkhout Among the top ten international scorers with 73 goals from 89 matches, Saudi Arabia’s Majed Abdullah and India’s Sunil Chhetri, Mabkhout equal with Japan’s Osako Yuya and his compatriot Takmumi Minamino to the top scorer in the qualifiers with 8 goals, and then Lima added his second and fourth goal Our team ended the match four times without a response.