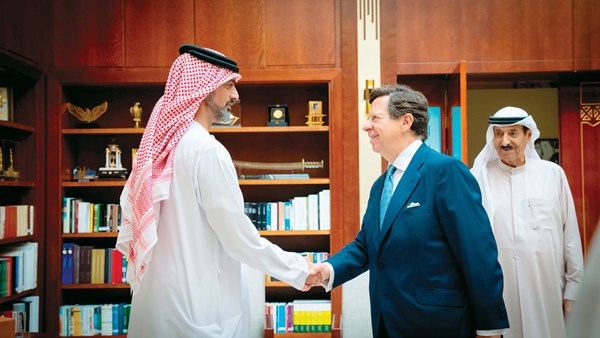 His Highness Sheikh Ammar bin Humaid Al Nuaimi, Crown Prince of Ajman, received, at the Ruler’s Court yesterday, Inigo de Blasio, the Ambassador of the Kingdom of Spain to the country, who came to greet His Highness and to meet and discuss ways of cooperation. His Highness welcomed the Spanish ambassador, wishing him a pleasant stay, success and success in his work duties, stressing that he will find from officials every cooperation in order to perform his duties to the fullest.
During the meeting, His Highness stressed that the UAE has distinguished friendly relations with the Kingdom of Spain, and is keen to develop areas of joint cooperation in various sectors, especially the investment and tourism sector.
The ambassador expressed his happiness to meet His Highness, the Crown Prince of Ajman, praising the depth of the bilateral relations between the two countries, and the civilized renaissance witnessed by the UAE in various fields.
During the meeting, they reviewed the friendly relations between the two countries and peoples and ways of consolidating them in various fields. The meeting was attended by Hamad Rashid Al Nuaimi, Director of the Ruler’s Court, Salem Saif Al Matrooshi, Deputy Director of the Ruler’s Court, Youssef Mohammed Al Nuaimi, Director General of the Protocol and Hospitality Department, and Ahmed Ibrahim Al Ghamlasi, Head of the Crown Prince’s Office.

See also  Inflation in Mexico gives a slight respite and stands at 8.7% in September

Crime against Bruno and Dom was solved due to organized crime, says Guedes - ISTOÉ DINHEIRO