Agustín Palavecino and a Superclásico that will be unforgettable: debut as a starter and first goal in River 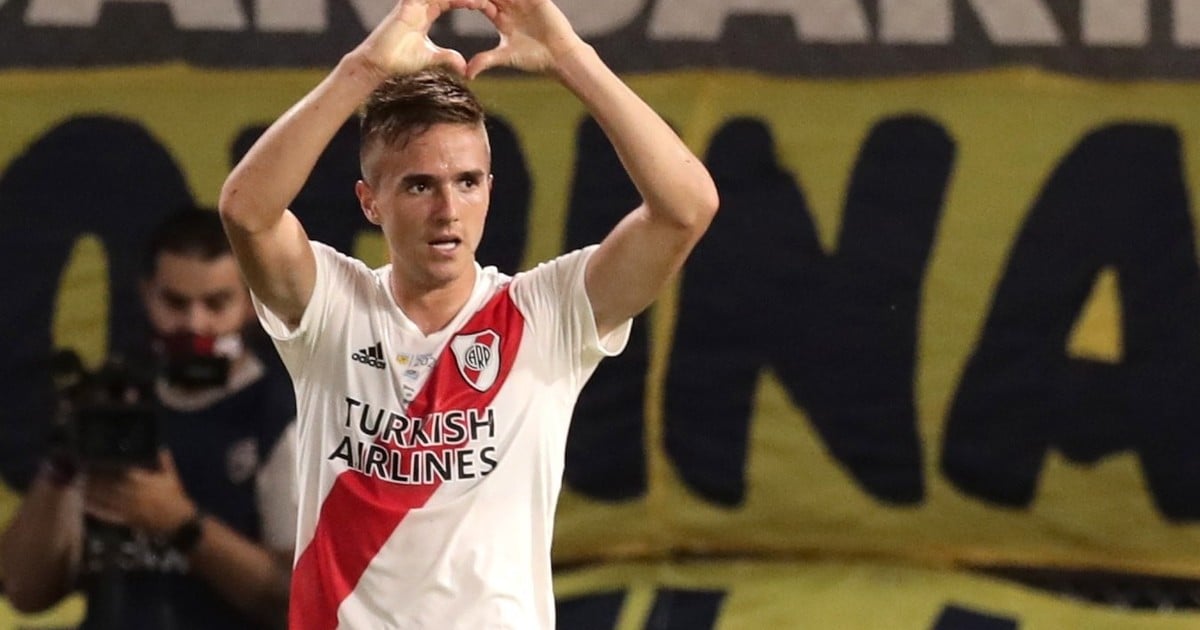 Since Marcelo Gallardo called him in mid-January, his life changed. That conversation revolutionized him. And, while he continued to show off at Deportivo Cali, Agustin Palavecino, began to dream in red and white. At first, the negotiations were delayed. But everything worked out as the midfielder wanted. And so, after some twists and turns, the first days of February the agreement between River and the Colombian club arrived. Palavecino traveled to Buenos Aires and immediately got into the working orbit of the Doll. A little over a month later, he played his first game as a starter and scored a goal. Nothing less than in a Superclásico and in the Bombonera.

Gallardo saw Palavecino two and a half years ago when River faced Platense for the Argentine Cup. Pala was playing with the Squid’s 10, who had recently been promoted to the First National at the time. “The one who plays with the 10 is good,” El Muñeco told his collaborators that September 12, 2018 on the Lanús court, after River won 2-0. And coach Millonario was on the radar.

This pass market, the Doll He wrote it down and brought it in, knowing that Ignacio Fernández would leave the club. He took it little by little. He did enter the second half of the matches with Rosario Central, Platense and Argentinos, for the Professional League Cup and in the final against Racing for the Argentine Super Cup. And against Boca, a game in which he decided to change the scheme, to return to the line of four defenders and add one more midfielder, he gave him the chance from the start. And Palavecino repaid that confidence with a good game and a goal.

“I am very happy to have scored the goal but I am leaving with a bitter taste because it did not happen in the last play we had near the end to convert and win the game,” Palavecino said at the end of the Superclásico. And with that statement he showed that already has the gene that Gallardo he instills in his players.

Palavecino’s goal came in the 22nd minute of the second half, after a cross from Fabrizio Angileri. Just when the two were going to leave, as confirmed by Marcelo Gallardo later. Paradoxes of destiny. Soccer stuff. And then he continued playing for a while longer.

“During the week we all train in the same way, waiting for the opportunity. And the coach confirms who plays for a while before the game, “said Palavecino, who came to La Bombonera smiling, already knowing that he was going to play before going into the visiting dressing room. “Gallardo asked me to help Enzo (Pérez) and to get together with De la Cruz and Carrascal to generate play.” And regarding his goal, he commented: “I sensed that Fabri (Angileri) could shoot the center and I threw myself back, and after heading I did not see that he had entered. I realized it by the shout of my companions ”.

Palavecino is 24 years old and grew up watching and admiring Andrés Iniesta. In recent years, he was moved by Juan Fernando Quintero. But its referent, his lighthouse, is Erik Lamela, his first cousin. His mother, María Ester, is the twin of Erik’s father. “I saw Erik’s goal and I wanted to congratulate him on his great goal,” he said in reference to Lamela’s great goal to Arsenal with Tottenham’s Premier League shirt.

Palavecino was born and raised in Florida, Vicente López. His first dribbles were at the Sociedad de Fomento Aristóbulo del Valle, located in Agustín Álvarez and Maipú. From there he went to Platense at the age of 11: he lived three blocks from the Squid. He made his debut in 2015 and played four years at the club until he emigrated to Deportivo Cali in a record figure for a player in the Primera B Metropolitana: $ 500,000 for 50 percent of the pass.

Today he plays in River. And he scored a goal in his first Superclásico, as happened with Gastón Fernández, Mauro Rosales, Jonatan Maidana, Rodrigo Mora and Federico Girotti, the five previous players to score a goal in their debut against Boca, like so many others in history. Now, it was Palavecino’s turn. A chosen one.

In Ukraine, they talked about the change in China's position on Crimea