After the controversy over his phrase, Alberto Fernández conducted a training on disability 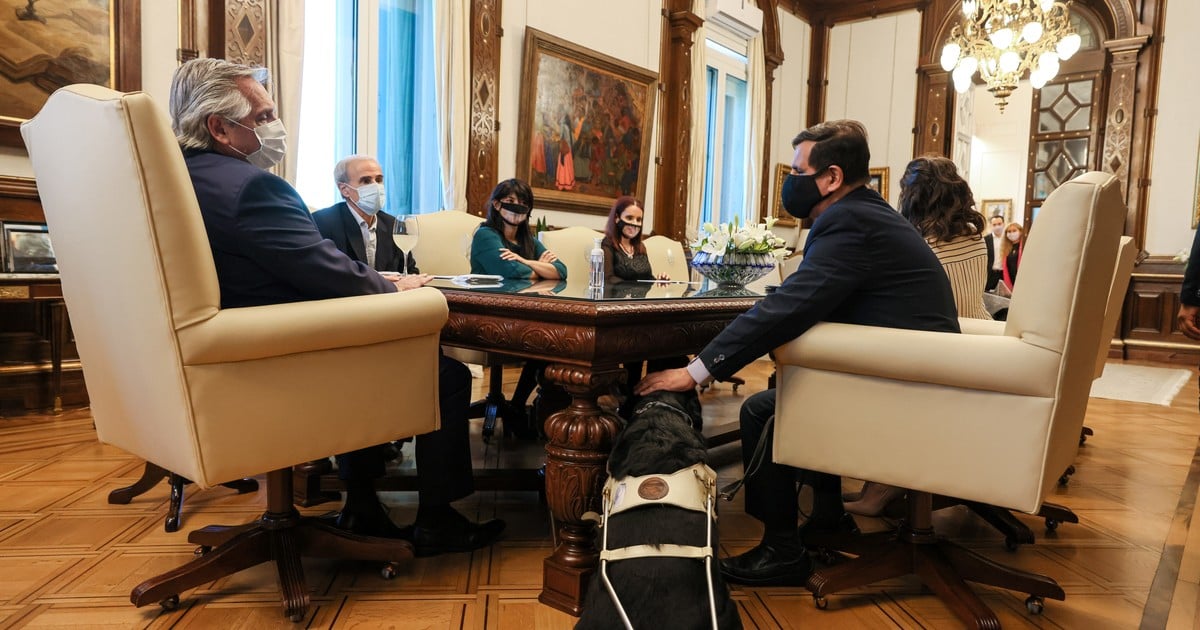 President Alberto Fernández met on Monday afternoon with the authorities of the National Disability Agency (ANDIS) at the Casa Rosada and received training on the subject, after the controversy that unleashed his phrase about “the boys who don’t understand”.

This was reported by the Presidency about the meeting with authorities who “analyzed the area’s agenda, especially the actions in the framework of the pandemic.” “In this context – says the official statement of the presidential activity – the president conducted a training on the social model of disability and accessible communication “.

Training occurs after the arguments that the President used in an interview to justify his intention to suspend face-to-face classes at the AMBA by decree.

After his recorded message last week, Alberto Fernández had said: “All this time I have spoken with school teachers of boys with different abilities, about how difficult it is for them to work with those guys, who don’t understand the dimension of the health problem they face ”.

The phrase generated several controversies. Organizations they corrected the President to speak of “boys with different abilities”, when it comes to people with disabilities.

The criticisms -which went viral on networks for days- came to take shape in a complaint from the Down Syndrome Association, Asdra, which fought, in harsh terms, so that “the expressions of the members of the Government are in tune with a rights approach”And demanded for the vaccination of risk groups.

This Monday’s meeting was in Fernández’s office. For ANDIS, they participated its executive director, Fernando Galarraga; the executive deputy director, Greta Pena; the Communication Coordinator, Verónica González and the Head of Advisors, Antonella Cozzi.

Sources of the same, maintained that Galarraga addressed the issue of sayings presidential elections, although no details of that exchange were disclosed.

Officially, only the statements of the ANDIS head about the inheritance received for the previous management in the area -in terms of debts to suppliers and beneficiaries- and the measures adopted by the Agency in the course of the pandemic.

In the communication from the Presidency, however, it was also detailed that “it was agreed to promote said training for Cabinet members national, with the objective that this perspective is transversal to all public policies “, with the intention of taking them to” all areas of the administration “.

ANDIS is the body in charge of developing, articulating and implementing public policies from an integral perspective of promoting rights, facilitating the access for people with disabilities to all the tools proposed by the State on the matter, they officially detailed.

“Relaxation”, the other controversy

Alberto Fernández apologized this Sunday after criticism about your reference to relaxation of the health system.

Despite considering his words misrepresented, the President maintained: “If someone honestly got upset with my sayings, beyond what was explained, with the same honesty I apologize “.

In recent days I have seen different expressions that expressed discomfort, attributing myself to having referred in my public speech to a certain “relaxation” of medical and paramedical personnel in health care during the pandemic.

The phrase had also gone viral and woke up in the networks the doctors reactions who posted their photos in rejection.

The President announced a new bonus for health personnel, 6,500 pesos, for three months.

So far, he made no further reference to criticism for his approach to disability. No more than this Monday meeting at La Rosada, with training included.

The physical limit of MotoGP