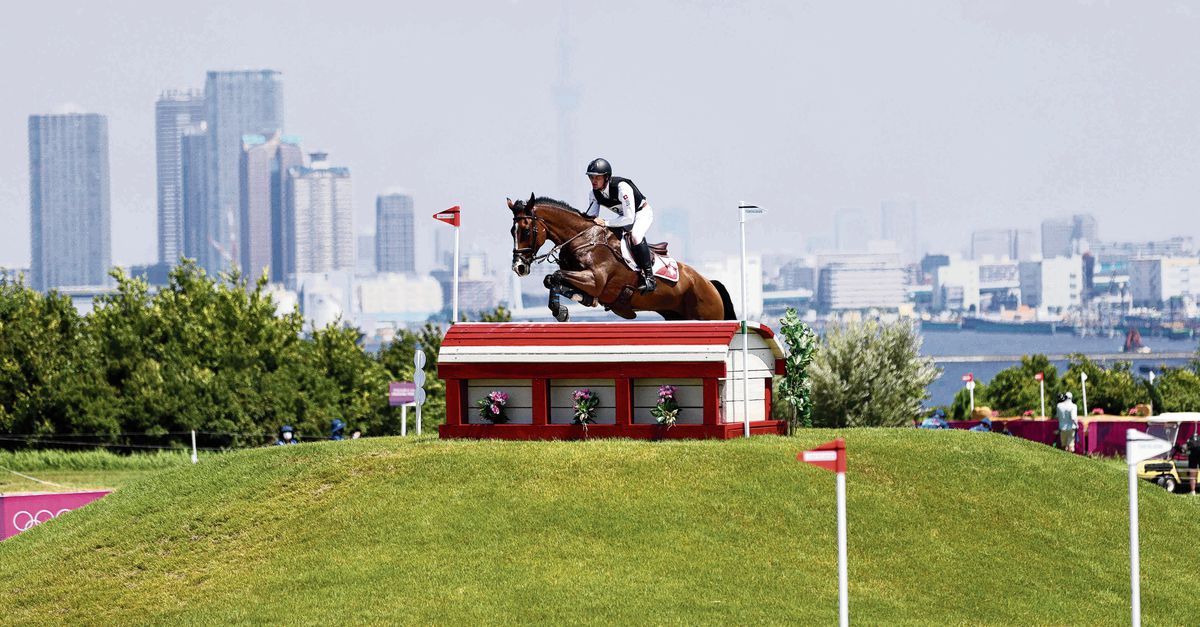 He has already defied nineteen obstacles. A dragon and carp made of wood, a tree trunk transformed into a samurai sword, a temple of wooden poles, a stone bridge. One he jumped effortlessly, others needed more daring, just like the obstacle he is now heading for, in the specially created meadow next to Tokyo Bay.

Mount Fuji is the name of the obstacle and anyone approaching it from the front might think they have to jump over a large coffin. It consists of planks, has a lid-shaped roof and is decorated with plants and a small bed. The grass around it has been cut short. Perfect for trimming the hooves. After the jump, a ramp awaits on the way to a waterhole.

The hurdle does require some bravery. Not the rider’s, but his, Jet Set, a fourteen-year-old auburn gelding with the sparkle of new suede steppers.

At least that’s what it says in the official description of the Sea Forest Cross-Country Course, the course built on an artificial island where this cross-country competition at the Olympic Games takes place. “The hills in front of the water are quite impressive and require riders to maintain a positive attitude when approaching the obstacle (…) The horses must have energy and be brave to jump over them,” reads the course description.

To the animal hospital

So now it’s Jet Set’s turn to make the jump. He may look a bit tired, as analysts would later explain, but there’s nothing out of the ordinary in his stride as he gallops toward Mount Fuji. Nor does the man on his back, 23-year-old Swiss Robin Godel.

After jumping the hurdle, Jet Set only walks on three legs. He holds up his right front hoof, the only white of the four. Connoisseurs know enough: this sports competition can sometimes get a dark edge.

Godel immediately dismounts. Walkie-talkies in hand, race officials rush to the fence, where vets bend over the shiny gelding, shielded by a six-foot black plastic screen, which volunteers strung around the scene like a crime scene. Not much later, Jet Set disappears into the animal ambulance, on the way to the clinic specially set up for the horses flown in to Tokyo. There are 331, divided over four disciplines: dressage, jumping, modern pentathlon and eventing, which this cross-country competition falls under.

At the animal hospital, Jet Set is waiting for an ultrasound. Doctors will then notice a rupture in a tendon, an injury that could be easily repaired if Jet Set had been human. Surgery, then two weeks flat with the leg up, then four to six weeks in a walking cast, then rehab on the field.

But Jet Set is not human.

His fate evokes memories of that of Air Lift, the stallion who featured in an acclaimed column by the well-known American sports journalist WC Heinz in the New York Sun of July 28, 1949. At the Jamaica Racecourse in New York, Heinz had seen it happen up close. How Air Lift broke his leg, was limped away and the men around him had sighed that there was only one thing on it.

“They had washed the foal after giving him an injection to ease the pain, and now he was standing, eating quietly from the hay they had placed at his feet,” Heinz noted. Not long after, Air Lift lay motionless on the ground, an hour and a quarter of an hour after its take-off, while a vet removed a piece of the stricken bone in his leg as evidence for the insurer who was going to cover the damage.

Seventy-two years later, the procedure for a lame horse is not much different. Jet Set, they conclude after the echo in Tokyo, appears to be too badly damaged to be repaired. At 13.32 hours, approximately three hours after his start, the message follows that he has died. “On humane grounds and with the consent of the owners and the athlete, it was decided to put the horse to sleep.”

“It is with a heavy heart that I have to report that my beloved Jet Set has left us far too soon,” writes rider Godel on Instagram. “Jet Set was an outstanding horse who again completed a great cross. He did what he loved best: galloping and flying over the obstacles.”

According to the Swiss Olympic Committee, it was not Godel’s fault that the day ended tragically, nor the course. There will be a lot of discussion in the near future as to who was the cause.