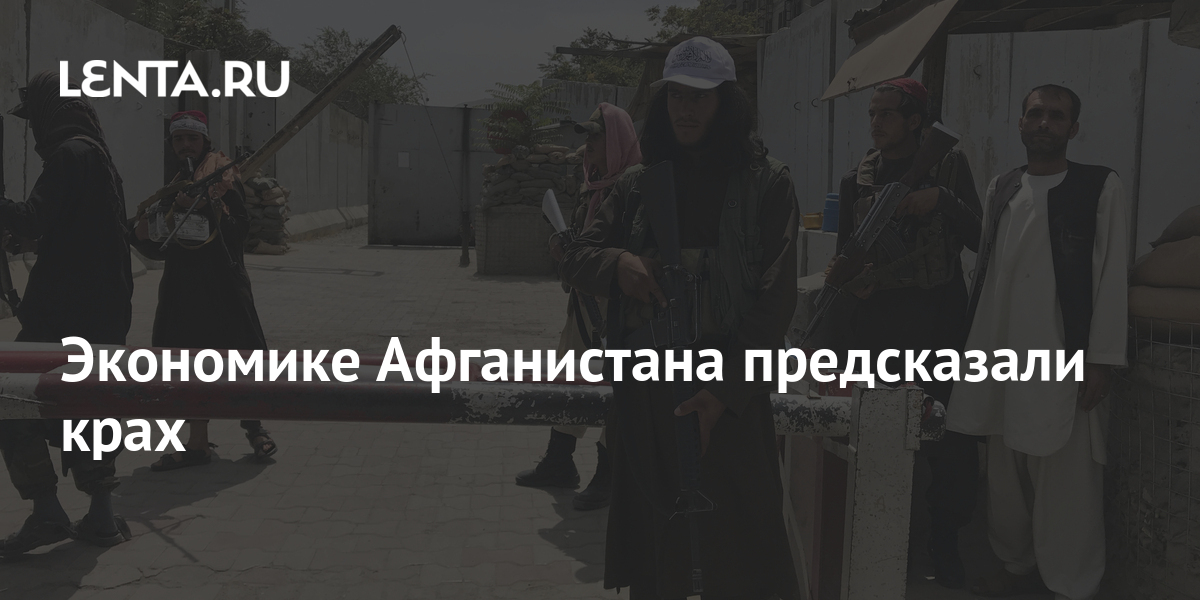 Over the past decades, Afghanistan has been heavily dependent on natural resources and financial assistance from abroad – in 2019, its total amount amounted to almost a quarter of the country’s gross national income. These factors allowed the country’s economy to grow slowly but steadily, despite a number of internal problems. However, with the advent of the new government, the state was predicted an economic collapse. BBC News…

A few months before the seizure of the country by the Taliban (in Russia, the organization is banned and is considered a terrorist) The World Bank described the Afghan economy as “fragile and aid dependent”. Now her prospects look even more precarious. Experts name several reasons for the coming recession.

The major world economies will obviously cease to support the country under the new government. For example, German Foreign Minister Heike Maas said: “We will not give a cent if the Taliban take over the country and introduce Sharia law.” NATO Secretary General Jens Stoltenberg also said that there would be no more NATO assistance to the Afghan government “as it no longer actually exists.” This means that the government will have to turn to internal resources to support the Afghan economy.

Here, however, they will be faced with the need to inject huge funds into security, massive corruption, an underdeveloped private sector and unproductive agriculture that have characterized the country for several decades. In addition, a large part of the Afghan economy is illegal – the illicit production, production and smuggling of opiates has been an important source of income for the Taliban itself. All this led to a very weak flow of investments from foreign businesses.

The only thing that could stimulate the economic growth of the state in such a situation is the exploitation of vast mineral resources. With a higher level of security and lower rates of corruption, they would be attractive to international business. In Afghanistan, copper, cobalt, coal, iron ore, as well as oil, gas and precious stones can be mined in significant quantities. Lithium deserves special attention – a metal used in batteries for mobile devices and electric vehicles. Its mining promises to be very profitable as the automotive industry shifts to carbon-free modes of transport.

However, a Taliban-dominated Afghanistan is unlikely to attract large investment in the foreseeable future. China can be expected to be interested in them. His political ties to the organization that seized power are much stronger. The common border of the two states also plays a significant role.

But any Chinese institution – government or commercial – needs guarantees of success. An enterprise will not commit itself unless it can ensure that security and corruption issues are well managed. Only this will allow him to start large-scale production of industrial raw materials on the territory of Afghanistan. China and any other potential investors are primarily interested in whether the Taliban will create a more conducive business environment than the previous government.

Another factor that can affect the economy is the employment of the female population. Over the past decade, the percentage of working women over 15 years of age has skyrocketed to 22 percent in 2019. Under the Taliban, this figure is likely to decrease significantly, worsening the country’s economic prospects, writes the BBC.

The Afghan population itself does not count on financial stability at all. Crowds of people rushed to withdraw their money from banks after the seizure of power. The national currency is also experiencing the worst times. The Afghan exchange rate fell to a record low and on August 17 amounted to 83.5013 per dollar. The currency continues to depreciate for four days in a row. Before leaving Afghanistan after the coup, the head of the Afghan central bank, Ajmal Ahmadi, said that there would be no more supplies of dollars to the country.