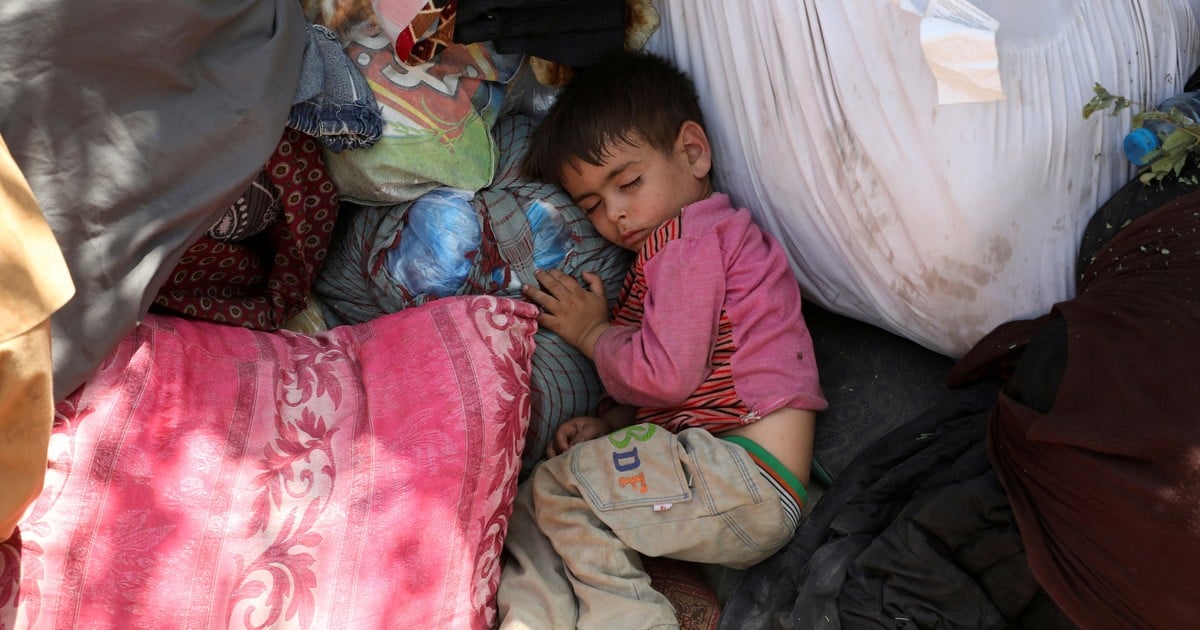 Kabul begins to become an open-air camp with thousands of Afghans who settle in parks and wastelands after fleeing the fighting that hit Afghanistan due to the Taliban offensive, which only in recent days have conquered eight regional capitals.

Most of these families, demanding urgent humanitarian aid, come from the capitals of the northern provinces of Jawzjan, Sar-e-Pol, Samangan, Kunduz and Takhar, falls under insurgent control.

In their rapid advance, the Taliban on Tuesday added the western Farah, capital of the province of the same name, and the northern Pul-e-Khumri, capital of the Baghlan province, to their loot. the eighth to fall since last Friday.

Today hundreds of families they fled from one place to another of Farah to try to save their lives, while an avalanche of inhabitants of Pul-e-Khumri left the city in the direction of Kabul.

“We have registered 17,000 families (displaced) so far, but we fear that this number is much higher, it could be around 30,000 families – about 210,000 people – in Kabul, “Disaster Management Minister Ghulam Bahauddin Jailani told a press conference today.

This data could increase dramatically in the coming days, as a large number of families continue to arrive in Kabul from northern Afghanistan.

“We are in the sun and it is very hot. Our children play in this dusty place, we worry about our children, “Abdul Wali, the father of a family of six who arrived from Kunduz in recent days, told EFE.

This 25-year-old man assured that so far he has not received no government assistance, which aggravates the situation of these people, who have arrived empty-handed.

“We need food, shelter, and household items.”Wali explained, as the rest of her family sat on a small blanket under a tree in the Sarai-Shamali area of ​​Kabul.

A little further on is Sajidullah, 28, also displaced from Kunduz province, along with his family of five, who He arrived in the city just two days ago.

Taliban in Farah, the capital of Farah, in the south-west of the country. AP Photo

“We left our home and town due to heavy fighting, we leave all our belongings, all our people abandoned their homes, “he said.

Sajidullah and his family they fled only with the clothes they were wearinghe said, and so far they have only received a little food and water.

“We don’t have any other assistance”lamented the man, whose only belongings are a piece of rug to sit on and a few cups to drink water.

The Government, which has requested the help of international agencies to assist the displaced, indicated that initially they are only providing food and water, while shelter and other assistance will be offered when the authorities study their situation.

These families will be temporarily installed in a camp north of Kabul, for which some 3,000 tents have been installed, the spokesman for the Ministry of Refugees and Repatriation, Reza Baher, told Efe.

According to the estimates of the Afghan government, the ongoing war has displaced in the last two months more than 420,000 people of 25 out of 34 Afghan provinces, most of them in Kandahar, Helmand, Jawzjan, Sar-e-Pol, Samangan, Kunduz and Takhar provinces.

“We will use empty government buildings to settle these families, “said the Minister of Disaster Management today.

Meanwhile, the Government has asked the international community to put pressure on the Taliban so that they declare a ceasefire that stops the massive displacements.

“Whenever a city falls to the Taliban, all its residents leave their homes and they flee from those areas, “said Minister Jailani.

The situation is even more critical for displaced from rural areas who fled to provincial capitals that later also fell under Taliban control or are still in dispute with armed clashes.

“We can no longer provide humanitarian assistance in the provincial capitals where fighting takes place, “said the spokesman for the Refugee Ministry of a country that already had five million internally displaced people, the result of 20 years of conflict and drought.

The violence experienced by large areas of the country due to the Taliban offensive and the bombings by Afghan forces it causes more and more victims among the civilian population.

The International Committee of the Red Cross (ICRC) reported today that its health workers have treated just in the last week more than 4,000 war wounded, including civilians and combatants.

Even organizations such as Doctors Without Borders (MSF) report that this week they were hit by a projectile at their facilities in the besieged city of Lashkargah, although it did not cause casualties. “Bombs and Missiles Fall Day and Night”, said the representative of MSF in Afghanistan, Filipe Ribeiro, in a statement sent to Efe.

“We are seeing all kinds of wounds: shrapnel, gunshot wounds, people with serious burns … What the (medical) teams are witnessing is horrible, “said Ribeiro.