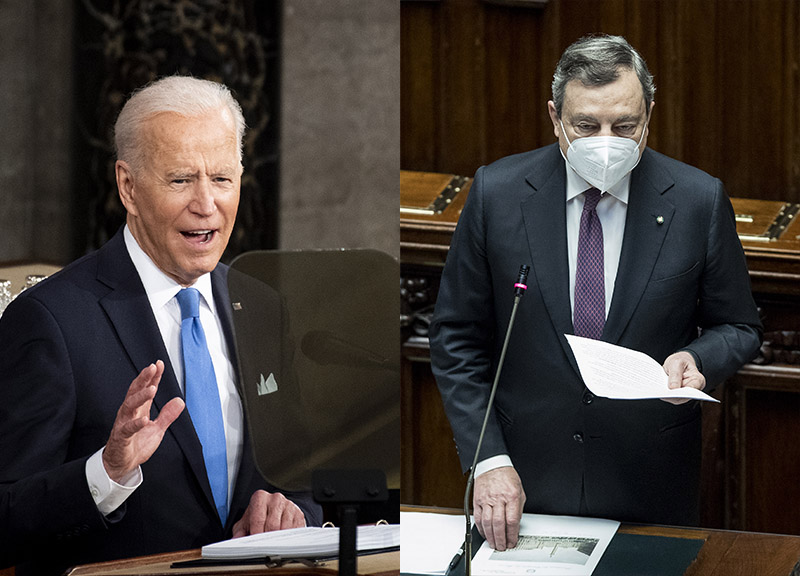 The diplomatic risk on the crisis in Afghanistan begins. Prime Minister Mario Draghi had a telephone conversation with the President of the United States of America, Joe Biden tonight. The conversation focused on the latest developments and implications of the Afghan crisis, in particular the evacuation of compatriots and vulnerable Afghan citizens, the protection of human rights and fundamental freedoms, humanitarian assistance for the population. The prospects for the action of the international community in the various contexts, starting with the G7 and G20, in favor of the stability and development of Afghanistan were also discussed.

Biden and Draghi “discussed the importance of continuous close coordination between their respective military and civilian personnel in Kabul who are working tirelessly together to safely evacuate their own citizens, the Afghans who have bravely supported us and NATO in the effort of war, and other vulnerable Afghans. ” This was reported by the White House in a statement. Then “they welcomed the opportunity for the G7 to plan a common approach on Afghanistan at the virtual meeting of leaders next week”.

Afghanistan, Merkel asks Putin for help: “Use your influence on the Taliban”

“I asked Russia to contribute in the talks with the Taliban so that the evacuation of the local forces in Afghanistan, who have worked alongside us for many years, is facilitated”. In her twentieth mission to Moscow in the role of Chancellor, Angela Merkel made a very explicit request to Russian President Vladimir Putin: that Russia help to intervene with all its weight in its direct contacts with the Taliban to bring out of the country “the greatest possible number “of those local forces that over the years have worked side by side with the diplomats, the military, the German politicians stationed in Kabul within the NATO mission. “It is a very frustrating moment seeing that the Taliban are back and that they control the country”, the chancellor says in the press conference alongside the head of the Kremlin, which took place at the end of a long face to face between the two, so much so as to slip the press conference lasting almost an hour. Perhaps the last, given that with the upcoming elections in September, the long term – sixteen years – of the former ‘girl from the east’ at the chancellery is almost over. In this case, Merkel wanted to indicate to the Russian president to remind the new rulers of Kabul “that collaboration on humanitarian aspects is a more viable way” if the Afghans who have worked for the military and political structures of the Atlantic Alliance can leave the country “. For the rest, the Chancellor – echoing that “we were all wrong” pronounced a few days ago – reiterated her negative balance on twenty years of mission in Afghanistan: although it was possible to “reduce” the acute risk of terrorism from , on the whole, “the objectives we set ourselves have not been achieved”.

Afghanistan, the Taliban crisis relaunches Putin in the West

It is Putin himself who refers to the international community which must commit itself to averting the “collapse” of Afghanistan, trying to put behind the “irresponsible” approach of the West, which “has tried to bring its values ​​”, implying that it is precisely this model that has failed:” I believe that this is the lesson of Afghanistan “. At the same time, the Russian president warns that “terrorists” could pour into neighboring countries, for example under the guise of refugees. And he addressed the Taliban themselves: “They must not go beyond the borders of the country”, the head of the Kremlin said, this is “of crucial importance”. The fact, the president insists, is that “the Taliban control almost all of Afghanistan, we need to acknowledge it and start from this”. Therefore, this is his assessment, “it is necessary to start from the awareness that the Taliban are in power to avoid disintegration”. On the other hand, Putin – albeit with his usual icy ways – shows that he does not want to rage on American performances: “The US operation in Afghanistan cannot be described as a success, but to stop and discuss the results of the US campaign. it’s not in our interests. ” Certainly, what has been defined as Merkel’s “farewell visit” to Moscow was not a simple walk, despite the fact that the Chancellor and the President have had relations for decades now, they are in the habit of discussing in Russian and know each other’s tics perfectly. There was also talk of Ukraine, Nord Stream 2 (“there are only 15 km to go to its completion”, Putin reports), the Libyan crisis and the Navalny case (the chancellor asked again, and with great clarity, for the release of the Russian dissident). And then Merkel says it explicitly, addressing her interlocutor in the Kremlin: “I have been to Russia many times and over the years I have always had constant contacts. It has not always been easy, but the attempt is always to find compromises. I am. absolutely convinced: there is no more sensible alternative to seeking compromises “. In a nutshell, it is the very heart of Merkel’s thought and action.