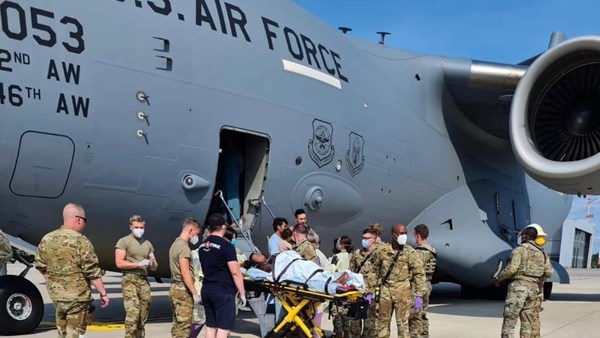 An Afghan refugee gave birth on a US military plane while she was on her way to the Ramstein base in Germany.
The Mobile Air Command of the US Armed Forces announced on Twitter, in the early hours of Sunday morning, that the pregnant woman began feeling contractions and “complications” during her evacuation flight among a group of Afghans after the Taliban took control of the capital, Kabul.
The leadership added that the woman gave birth to her newborn in the cargo room moments after the plane landed on an evacuation flight.
She explained that the mother and newborn are in good health.
The United States and many countries are evacuating their diplomats, nationals, and Afghans who worked with them from Kabul International Airport.
And the leadership confirmed in a tweet, “The mother entered labor and began to suffer from complications. The pilot decided to descend from altitude to increase the air pressure in the plane, which helped stabilize and save the mother’s life.”
After landing in Germany, the mother, whose identity has been revealed, was treated by paramedics on board the plane, a C-17.

CFPB servicing rule aims to stave off another foreclosure crisis

Fernando Simón predicts what the next great pandemic will be like