Advertising on social networks: how much candidates, leaders and governments spend, and who pays it 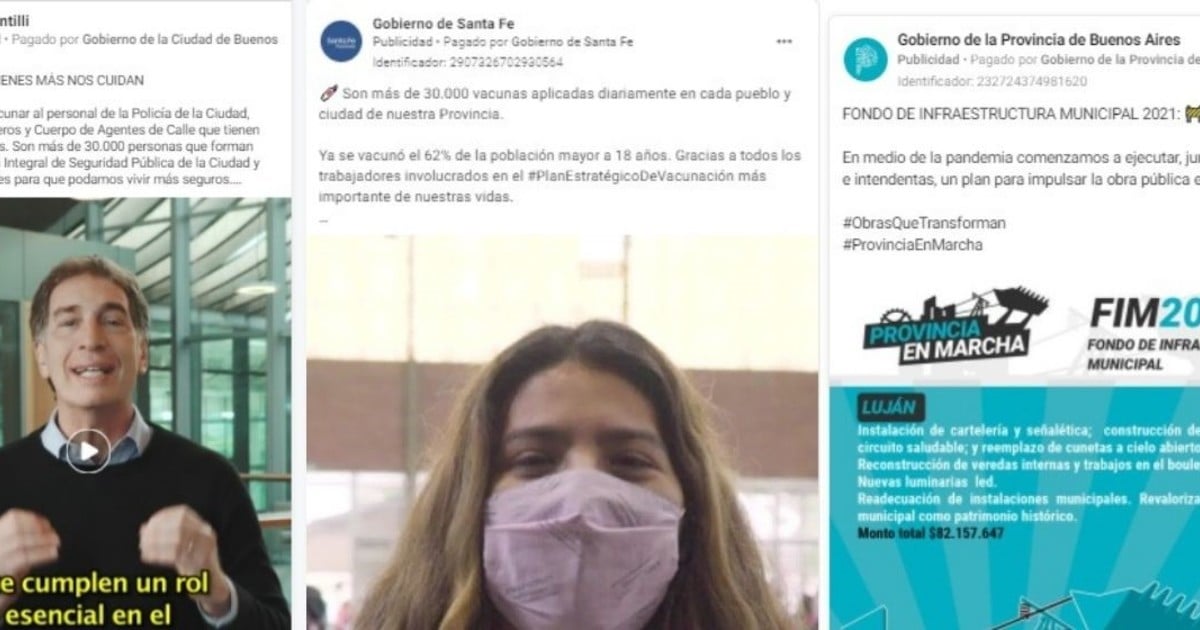 In the last 90 days, public bodies, political leaders, parties and candidates they spent more than $ 100 million in advertising within the social networks Facebook and Instagram and their associated tools – such as Audience Network and Messenger-.

The data comes from report from the Facebook Ads Library, which shows who conducted ad guidelines within the categories “Social Issues, Elections, or Politics” and how those ads were funded.

In this note, we will tell you which are the main accounts that invest in advertising within the Facebook ecosystem, who pays for these expenses and to whom they direct the ads.

The Announcement Library of Facebook informs, in a section called “disclaimer”, who pays for the advertisements that appear on the platform.

In the last 90 days the Government of the City of Buenos Aires paid advertisements for $ 1.3 million in the official profile of the candidate for national deputy of the Province of Buenos Aires for Together, Diego Santilli, prior to the officialization your candidacy and your resignation to the vice-chief of Buenos Aires Government. This is the profile that spent the most.

Diego Santilli’s posts, paid for by the City Government.

Although the advertisements are related to management issues -such as registration with the City Police or ways of making complaints about theft-, some of them are configured to be shown to users in the Province of Buenos Aires, the district in which Santilli is running in the next elections.

For its part, the Government of the Province of Santa Fe paid advertisements for the official profile from Governor Omar Perotti (Frente Juntos) for almost $ 700 thousand. In the posts management actions are presented, but mainly focused on appearances by the president. The same happened with the mayor of Tigre, Julio Zamora (Frente de Todos), who published management notices in his personal account for $ 340 thousand, paid in this case by the Municipality.

Perotti’s advertising paid for by the Government of Santa Fe.

Agustín Frizzera, Executive Director of the NGO Democracia en Red, expressed his doubts about these practices, stating that, although they are management advertisements, “they are building their own capital in their profiles -which later remains- from official advertising ”.

They also appear in the list of advertisements posted by official accounts of officials, paid for by their parties. This is the case of the official mayors of Esteban Echeverría, Fernando Gray, and Almirante Brown, Mariano cascallares, who published notices of management financed by the Justicialista Party of their districts.

The advertised posts of Mariano Cascallares.

Those who spent the most

At nearly $ 17 million, the Municipality of Córdoba It is the official agency that spent the most money on Facebook advertising in the last 90 days. These are notices related to management – tree pruning, recycling, placement of lights, etc. – and segmented so that they appear only in the city. In most of the paid posts, the mayor, Martín Llaryora (We do for Córdoba) is mentioned.

In the capital of Córdoba, the Facebook page “El Señor de los Rollers” also appears with a strong advertising investment, Nickname that an opposition councilor put Llaryora in allusion to the painting works in Córdoba. The bill, which has no information about its creators, spent over $ 1 million in advertising of posts against the mayor.

More than $ 5 million In advertising expenses each, the governments of Santa Fe and Córdoba are the provincial administrations that invested the most money in Facebook. These are mainly campaigns in which tourism management or promotion events are publicized (see here and here).

Fourth is the Buenos Aires province, with expenses of almost $ 4.5 million in which advertise public works, security procedures and the vaccination plan. The Government of the City of Buenos Aires, for its part, ruled posts for more than $ 2.2 million in the last 90 days, also related to management.

The publicity of the Government of the Province of Buenos Aires.

The advantages of network advertising

Frizzera pointed out to Reverso that “the great advantage of publishing advertisements on social networks is segmentation”, since “this makes the investment much more profitable than in traditional advertising.”

“Advertising in networks is paid when they are consumed and, in addition, they allow organic growth, since those who share them with their contacts collaborate in their expansion without being paid for it,” said Frizzera.

For her part, Carolina Tchintian, director of the Political Institutions program of the Center for the Implementation of Public Policies for Equity and Growth (Cippec), told this medium that “in recent years we have seen an expansion and more intensive use of social networks and digital platforms by political parties and candidates, a trend that intensified with the outbreak of the pandemic and the restriction of face-to-face activities ”.

In this sense, Tchintian pointed out that, while in the 2011 elections, advertising spending through the internet and social networks constituted only 6% of the total, “in 2019 it was around 40% of total spending. And the trend is up ”.

This note is part of Back, the collaborative journalistic project that brings together more than 40 media to intensify the fight against disinformation during the 2021 elections.

The contact ways to join are: by mail to info@chequeado.com
by WhatsApp Y
/ ReversoAr on all networks.

Tepha Loza is scared after Elías Montalvo’s fall in Esto es Guerra: “Get me down, please”