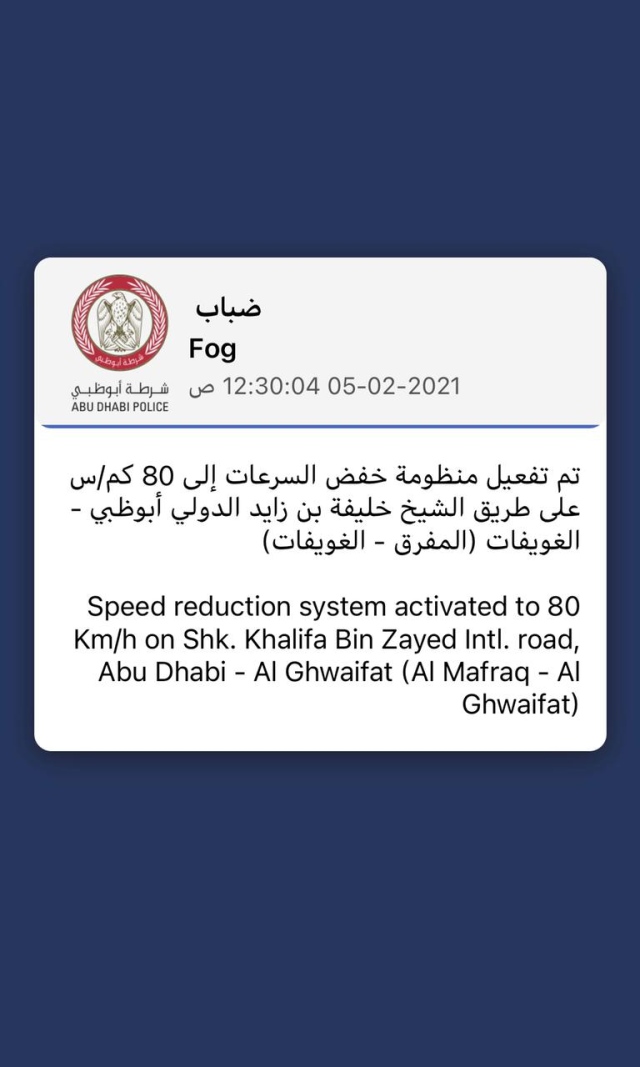 An opinion poll conducted by Abu Dhabi Police on social media in both Arabic and English revealed that 90% of road users benefit from the “urgent notifications” feature through its smart application to alert drivers when fog is forming on the emirate’s roads.

The Director of the Social Media Center at the Security Media Department, Major Khalifa Abdullah Al-Obaidly, stated that 90% of the audience who watched the accounts of Abu Dhabi Police confirmed that they benefited from the alerts sent by Abu Dhabi Police to notify drivers to reduce the maximum speeds on some roads during fog conditions.

He pointed out that Abu Dhabi Police is keen to seek the public’s opinion of the many services provided by the various police sectors in the emirate, with the aim of improving and developing the process of continuous communication between Abu Dhabi Police and its public.

He stated that the results of the survey showed the importance of the new feature launched by Abu Dhabi Police on its application for smartphones, which warns drivers during volatile weather conditions such as rain, fog, dust and dust and in traffic congestion situations, with the aim of enhancing the safety of drivers, as they must, upon receiving these notices, commit to driving the vehicle According to the speed that is specified on the roads of the Emirate of Abu Dhabi in times of changing weather, and it is a maximum of 80 km / h.

He pointed out that the Security Media Department is taking advantage of the results of opinion polls to redirect the “digital content industry” to the accounts and pages of the Abu Dhabi Police on social networks, in order to enhance the effectiveness of media messages, and increase their spread, influence and audience interaction with them, in order to achieve the strategic priorities of Abu Dhabi Police aimed at achieving Promote trust and effective communication between it and the local audience. It also stresses the importance of the media message related to increasing traffic awareness and stimulating positive traffic behaviors.

It is noteworthy that the accounts and pages of Abu Dhabi Police, through its media and communication channels, provide comprehensive and visual news services, in addition to awareness messages, and proactive warning alerts, of emergency cases on the roads around the clock, confirming the importance of the partnership and continuous interaction between the police and the community in order to enhance the security and safety of the community in all parts of the Emirate. Abu Dhabi.

29,800 people who lived in residences have died from covid in Spain since the start of the pandemic

Action scenes from world literature: When Paul Bowles froze in the Sahara – WELT

Resolutions in the Corona crisis: Gradual easing for German sport