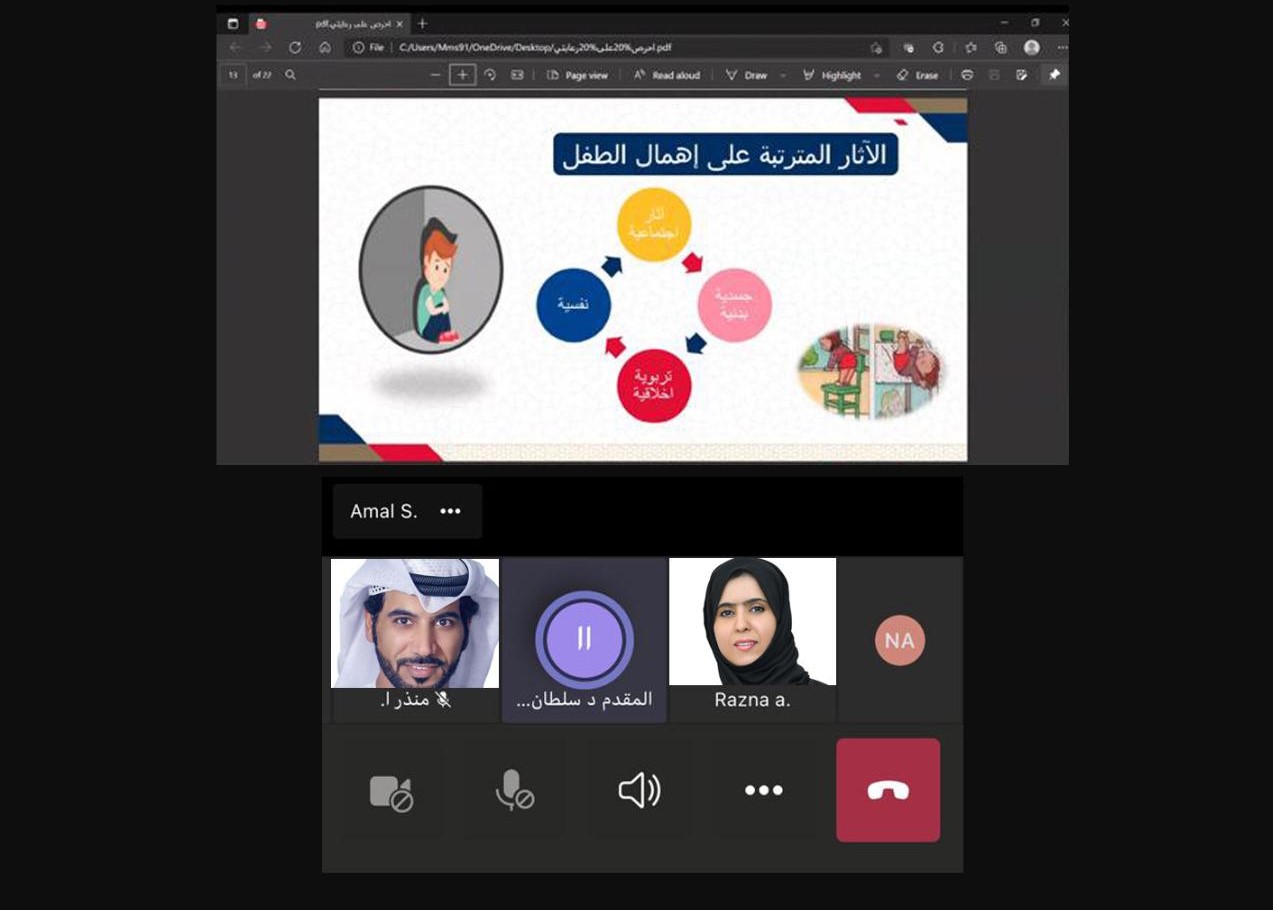 Abu Dhabi Police reviewed the types of child neglect, its causes and effects, and the proposed solutions to avoid neglect in a virtual council entitled “I take care of it” as part of the “Family Cohesion and Safety” campaign, implemented by the Department of Social Support Centers in the Community Security Sector.

The specialist, Razana Fahd Al Ahbabi from the Social Support Center in Al Ain, explained that the neglected child is subjected to 4 types of neglect, namely: physical neglect, which is represented in the child being beaten, ignoring the child and leaving him alone without supervision, being subjected to malnutrition and not providing the necessary health care, and leaving the child In dangerous places such as highlands without supervision, not taking care of his personal hygiene, which makes him vulnerable to diseases, emotional neglect through parents’ wrong behavior such as hitting and cursing, calling the child obscene words without taking into account his feelings and minimizing him in front of others, exploiting the child by transmitting negative messages between parents during their differences, and suppressing the child And holding him responsible for the differences between the spouses, and neglecting the child’s needs for love and dialogue.

She pointed out that educational and moral neglect is represented in neglecting the necessary guidance and counseling for the child, not following up on his academic level, not encouraging him to achieve good and continuous achievement, and finally sexual neglect, which is represented in the lack of awareness of the child how to protect himself if he is subjected to sexual harassment, and leaving the child to follow what he wants in the communication channels. Social without supervision, which promotes his wrong sexual desires.

She pointed to the reasons for neglect that are due to educational and hereditary reasons, meaning that the parents or the child caretaker suffered cruelty from his relatives, so he dropped these behaviors on the child, and because of the parents’ ignorance of the parental skills used in raising the child, or the parents’ lack of knowledge of the child’s rights and basic duties that stipulated It has laws that protect the child from any harm.

She pointed to the effects of child neglect, which are: physical and physical such as diseases, wounds, burns, fractures, abuse, obesity, excessive thinness and exposure to disability due to falls. And a sense of indifference, and finally, the moral educational effects of poor academic achievement, lack of responsibility, not behaving in a polite manner, and equating good behavior with bad behavior for loss of reinforcement and punishment.

She presented a set of proposals to avoid neglect, namely, parents’ awareness of the extent of the danger posed by their neglect of their children, whatever the form of this neglect, self-accountability and a sense of responsibility towards their children, increasing their educational skills by enrolling in social educational courses, keenness to inculcate moral principles in the hearts of children, and seeking help from parents Expertise, if necessary, for advice on educational problems that children may be exposed to, raising awareness of the child’s local and international laws, identifying the most important basic principles in them, creating a coherent family environment as much as possible, taking into account the child’s psychology, trying to satisfy the child’s needs with love and continuous kindness, and continuous dialogue between parents about the child. .