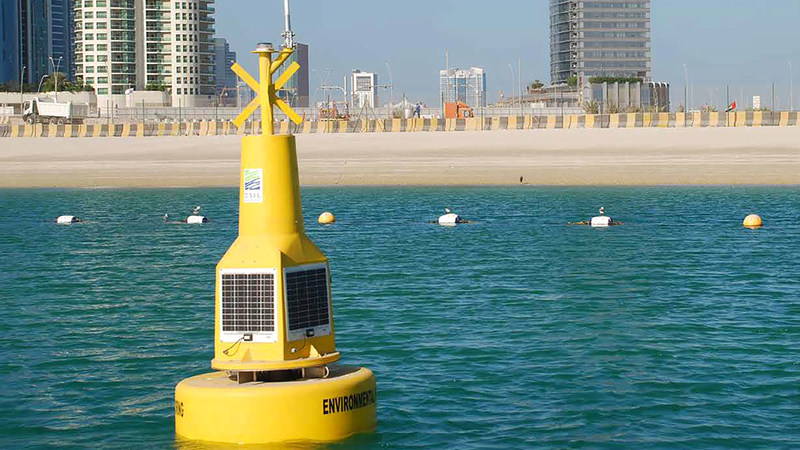 The Environment Agency in Abu Dhabi revealed that it recorded 13 red tide incidents in the waters of the emirate in 2020, through the Red Tide Monitoring Program, with no noticeable injuries recorded in Abu Dhabi waters, noting that the network of the automated marine water monitoring program currently consists of 10 stations that constantly monitor water quality. marine, in important and environmentally sensitive sites.

In detail, the authority confirmed that it monitors the quality of sea water automatically through a network of automated buoys, which act as an early warning system for red tide and algae growth cases. Regional and global, where nearly 20 peer-reviewed scientific papers have been published in the best scientific journals in the world.

In the annual report on marine water quality 2020, the authority indicated that the UAE witnessed a wide spread of harmful algae flourishing in the Arabian Gulf and the Gulf of Oman, which led to the loss of thousands of tons of fish and limited traditional fishing operations, as well as damage to coral reefs, and affected coastal tourism, This led to the closure of desalination plants in the area.

She pointed out that her research showed the presence of many types of bloom-forming and toxin-producing algae in Abu Dhabi waters, and until 2015 the algal bloom rate continued to increase annually, after which the trend began to decline, stressing that the blooming of harmful algae, especially toxin-producing species, constitutes It poses a serious threat to public health and desalination plant operations, and scientific understanding and engineering methods are important in mitigating the impact of harmful algal blooms on the marine environment and public health. The authority explained that the network of the automated marine water monitoring program currently consists of 10 stations that constantly monitor marine water quality, in important and environmentally sensitive sites, such as closed areas, beaches, critical marine habitats, coral reefs, seagrass, mangroves, and newly developed areas. She indicated that these buoys measure seven basic parameters of marine water quality (salinity, conductivity, temperature, pH, dissolved oxygen, chlorophyll, and cyanobacteria) every 15 minutes, and transmit data to the central database of the Environment Agency every hour. Buoys for the marine water quality monitoring program by detecting immediate changes and acting as an early warning system for harmful algal blooms and marine water quality.

The authority stressed that it has implemented, for more than 15 years, a comprehensive and integrated program to monitor the quality of water and marine sediments, aimed at studying and evaluating short- and long-term changes in marine water quality, and providing the necessary data to support decision-makers in taking the necessary measures to preserve the quality and sustainability of the marine environment.

The Environment Agency in Abu Dhabi confirmed that the executive regulations regarding marine water quality in the Emirate of Abu Dhabi, include the scope of its application of water and marine sediments surrounding the emirate, in addition to liquid discharges from land sources to the marine environment, through the application of environmental standards for the quality of water and marine sediments surrounding areas in areas Marine reserves in the emirate, as well as in areas of public use. She stressed that the regulation, recently approved by the Authority’s Board of Directors, aims to preserve the quality of water and surrounding marine sediments by regulating liquid discharges from land sources to the marine environment, in addition to developing measures to combat the deterioration of water quality and surrounding marine sediments and applying them to impact assessment studies. Environmental and environmental licensing applications. The regulation enhances the enforcement measures taken by the authority, including assessment, licensing, and environmental inspection procedures for development projects and industrial facilities, to ensure compliance with the requirements and requirements of the regulation.

More budget in Cartagena for markets and animal welfare