Absolute Italians, Mandia and Pinna tricolors in the Olympic 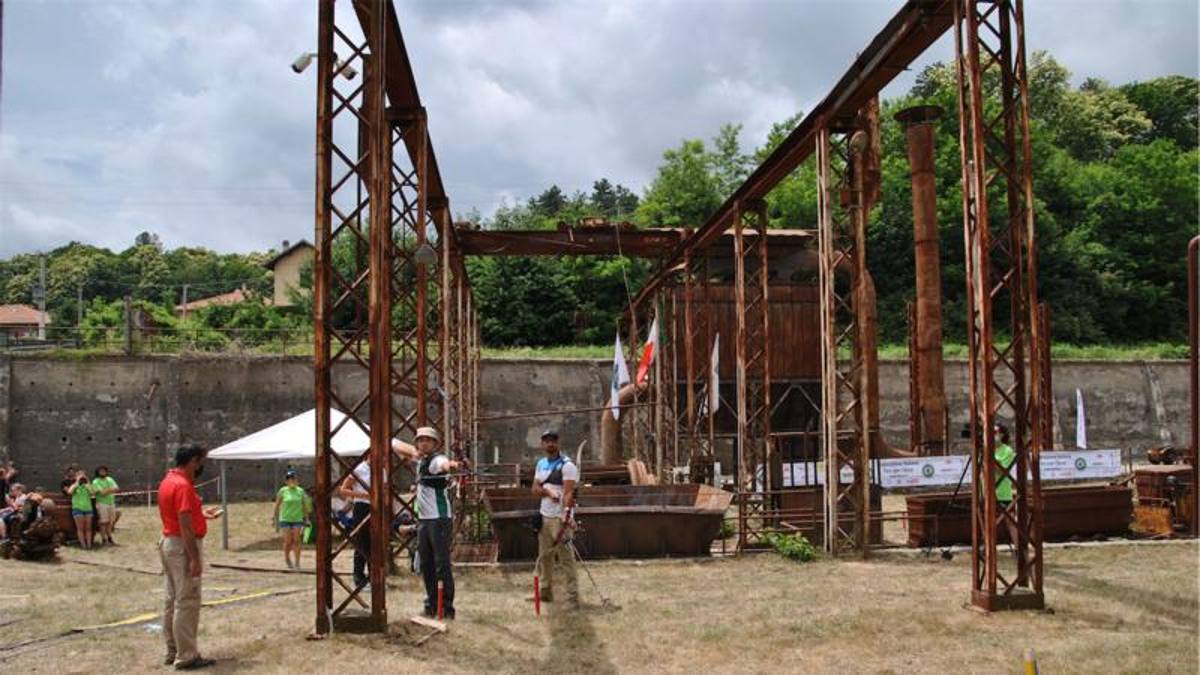 The titles assigned to Abbadia San Salvatore: Godano and Franchini in the compound, Esposito and Meloni in the naked bow, Pontremolesi and Bassi in the longbow

A different final than usual, with the 4 pitches of the finals set up at the Abbadia San Salvatore Mining Museum Park which provided a fascinating setting for the final act of the Italian campaign championship organized by the Montalcino Archers with the support of the Municipality of the town in the province of Siena and of Fitarco Toscana. After a year of waiting due to Covid-19, the absolute Italian titles were again assigned and this time too there were challenges with high competitive content, both because there were absolute podiums at stake, and because the Technical Manager of sector, Giorgio Botto, will draw his evaluations from this championship in view of the call-ups for the European campaign championships that will be held from 5 to 12 July in Porec, Croatia. In fact, it was almost all athletes who aspired to play a starting role at the next continental review to compete for the medals and in some cases there were challenges between more experienced blue athletes and young people who paw to wear the national team jersey continuously.

In the Olympic arc, Massimiliano Mandia (Fiamme Azzurre) who overtakes the home club athlete Matteo Santi (Arcieri Montalcino) in the fourth pitch has conquered his fourth absolute Italian title after those of 2013, 2014 and 2018: the athlete from Terni had arrived 2 points ahead at the last volley, but Mandia managed to overturn the result by closing the match in his favor 59-57. A challenge entirely by Aeronautica Militare that for the bronze: to win the third step of the podium was Federico Musolesi, who wore the airman’s jersey for the first time in a national event and who, after the bronze won a few days ago in the cup of world, shows the good moment of form by overcoming his national team mate Marco Morello 62-59. In the female recurvo, on the other hand, Laura Baldelli (Archers Augusta Perusia) failed to repeat the 2019 tricolor. The blue athlete was overtaken by an excellent Debora Pinna (Uras Archers), good at taking advantage of a wrong arrow by the Umbrian athlete in the second pitch and keeping the advantage until the end, giving herself the first absolute title with 56-52 conclusive. The challenge for the bronze instead rewarded Sara Noceti (Tigullio Archers) who outstripped Aiko Rolando (Fiamme Oro) 49-48. In the compound division the match for the Italian men’s title is won for the first time in his career by the junior Michea Godano (Arcieri Tigullio), who beats Jesse Sut (Kappa Kosmos Rovereto) in the only playoff of the day: the match after the four pitches ends 63-63, but Godano overcomes Sut 6-4 at the shoot off. The bronze is earned by Claudio Capovilla (Arcieri delle Alpi), despite a hand injury during the trial shots, able to overcome the winner of the junior class title Leonardo Costantino (Archers of the Alps) 66-59. The match for women’s gold instead saw the confirmation of the outgoing champion Irene Franchini (Fiamme Azzurre) who overtook the young blue Paola Natale (Arcieri Cormons) 61-57 in the final. For the athlete of the National team this is the third absolute compound tricolor but, unique case in Italy, he can also boast two absolute titles of specialties with the Olympic bow. To win the bronze was another blue, Sara Ret (Arcieri Cormons) who beat the blue Sofia Caccia (Arcieri Solese) for 57-54.

Eric Esposito (Arcieri di Malpaga B. Colleoni) won the absolute Italian title of the naked bow division, the third in his career after those of 2017 and 2018, after the final won over Alessandro Giannini (Arcieri Fivizzano) 52- 47. The match for the third step of the podium was awarded to Valter Basteri (Frecce Apuane) overcoming Luca Contorni (Archers Barbacane Città della Pieve). after the continental junior specialty gold medal in 2019, he proposes himself to be back in the European Championships by winning the final on Fabia Rovatti (Ki Oshi Archery) 46-44. The challenge for the bronze among the best blue in the division sees the victory of Eleonora Strobbe (Arcieri Altopiano Piné) who overcomes the outgoing champion Cinzia Noziglia (Fiamme Oro) 46-43. In the longbow were awarded for the first time the absolute titles with the direct clashes the tricolors of the longbow division. In the men, the blue Marco Pontremolesi (Arcieri Fivizzano) wins the gold, beating Giuseppe Cambiotti (Arcieri del Medio Chienti) 48-39 in the final. The bronze Moreno Giommoni (Arcieri Felsinei) wins by measure over Aalfredo Dondi (Kappa Kosmos Rovereto) 43-42. In the women, the Iuana Bassi National Team (Arcieri Tigullio) climbs on the highest step of the podium, winning the final over Laura Canale (Arcieri Lodigiani) 41-34. The bronze is earned with authority by the blue Paola Sacchetti (Archers City of Pescia) overcoming Angela Anna Frezza (Sagitta Archers Pesaro) 38-26. Also for this division the Championship was important to give indications in view of the convocations for the 3D European Championships that will be held in the last week of August in Maribor, Slovenia.