Abdullah bin Zayed: The UAE’s role is positive and important in combating extremism and terrorism 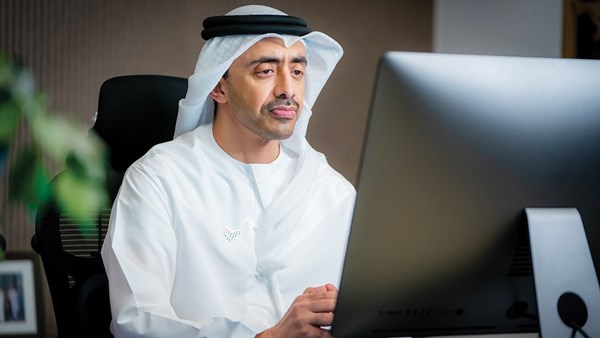 H.H. Sheikh Abdullah bin Zayed Al Nahyan, Minister of Foreign Affairs and International Cooperation, chaired the eleventh meeting of the Higher Committee for Supervising the National Strategy to Combat Money Laundering and Terrorist Financing. His Highness and members of the committee were briefed on the progress made by the concerned authorities regarding the file of combating money laundering and terrorist financing, as well as the targeted measures and reforms during the coming period, in preparation for the preparation and delivery of the state report on the monitoring period emanating from the Financial Action Task Force (FATF) in October 2021.
During the meeting, the Executive Office for Combating Money Laundering and the Financing of Terrorism presented a presentation on the progress of work within the country’s assessment file with the Financial Action Task Force “FATF” and the latest developments in the implementation of the national action plan to combat money laundering and terrorist financing, in addition to the most prominent achievements and challenges related to meeting the requirements of various targeted direct results. According to the recommendations of “FATF” included in the latest mutual evaluation report for the UAE.
The Supreme Committee was also briefed on the timetable for upcoming benefits within the monitoring period and the enhanced follow-up process for the UAE, where His Highness recommended all concerned authorities to provide all necessary support and cooperation to complete the monitoring period report in a way that reflects the great efforts and tangible development achieved by the UAE by upgrading its national system To counter money laundering and terrorist financing during the past year.

His Highness directed to focus on the international cooperation file in particular and in line with the important positive role that the UAE plays globally in curbing financial crime and combating extremism, terrorism and the spread of arms. The committee was also briefed on the approved mechanism for dealing with hawala brokers in the country.
The Supreme Committee approved the initiative of the Executive Office to launch a program to train 1,000 public and private sector employees in the field of combating money laundering and terrorist financing over the next five years. The Higher Committee was also briefed on the procedures of the Ministry of Economy regarding establishments that did not comply with the registration in the “GoAML” financial information unit system, which resulted in the imposition of 3,083 financial fines, each of which amounted to 50,000 dirhams.
The meeting was attended by His Excellency Obaid bin Humaid Al Tayer, Minister of State for Financial Affairs, His Excellency Sultan bin Saeed Al Badi Al Dhaheri, Minister of Justice, His Excellency Hessa bint Issa Bu Humaid, Minister of Community Development, His Excellency Abdullah bin Touq Al Marri, Minister of Economy, His Excellency Ahmed bin Ali Mohammed Al Sayegh, Minister of State, and His Excellency Khalid Mohammed Salem Balama Al Tamimi, Governor of the Central Bank of the United Arab Emirates, His Excellency Ali Saeed Matar Al Neyadi, Commissioner of Customs and Chairman of the Federal Customs Authority, His Excellency Lieutenant-General Talal Al Falasi, Head of the State Security Agency – Dubai, and His Excellency Lieutenant-General Abdullah Khalifa Al Marri, Commander-in-Chief of Dubai Police.
The meeting was also attended by Ibrahim Muhammad Al-Zaabi, Director-General of the State Security Apparatus, Rashid Al-Amiri, Undersecretary of the Ministry of Presidential Affairs, and Hamed Saif Al-Zaabi, Director-General of the Executive Office for Countering Money Laundering and Terrorist Financing.