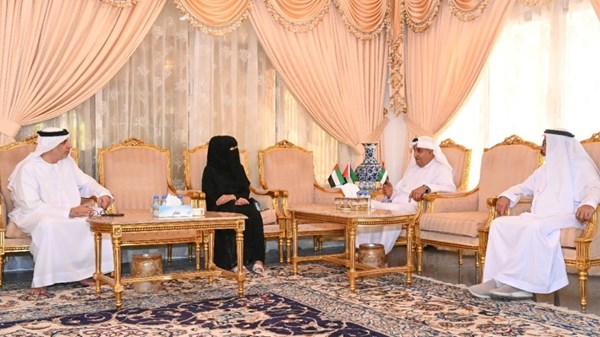 Ras Al Khaimah (Union)
His Excellency Sheikh Abdul Malik bin Kayed Al Qasimi, Special Adviser to His Highness the Ruler of Ras Al Khaimah, praised the wise vision of the wise leadership in reviving the heritage of fathers and grandfathers and the efforts of the late, God willing, Sheikh Sultan bin Zayed Al Nahyan, founder of the Emirates Heritage Club, and his vision of excellence and quality performance to preserve heritage The National Committee, praising the club’s mission of hard and persistent work to consolidate the national heritage and pass it on to promising generations.
This came during his reception in his council in Al-Zahra area in Ras Al Khaimah this morning, the Emirates Heritage Club delegation, headed by Fatima Masoud Al-Mansoori, director of the Zayed Center for Studies and Research affiliated with the club, and included Saeed Ali Al-Mannai, director of the activities department, and Badr Abdul Karim Al-Amiri, administrative director of the center.

The delegation honored His Excellency with the club’s shield and its recent publications, in appreciation of His Excellency’s clear efforts in preserving the heritage of fathers and grandfathers and His Highness’ many initiatives.
His Excellency Sheikh Abdul Malik bin Kayed Al Qasimi, Special Adviser to His Highness the Ruler of Ras Al Khaimah, affirmed that the late Sheikh Sultan bin Zayed Al Nahyan, may his soul rest in peace, paid all attention and care to the heritage of the UAE and the customs and traditions of its authentic people, and made tireless efforts to preserve and integrate it into the The fabric of contemporary life and its development with the necessary modern scientific methods.

His Excellency Sheikh Abdul Malik bin Kayed bin Muhammad Al Qasimi, during the meeting, praised the important achievements made during the direct supervision of the late Sheikh Sultan bin Zayed Al Nahyan on the various heritage and cultural events organized by the Emirates Heritage Club, stressing that the late Sheikh Sultan bin Zayed Al Nahyan set a wonderful example of culture, leadership and ambitious work to preserve the national identity and preserve its principles, and to prepare generations armed with science and heritage, belonging to the homeland and love of heritage, thanks to his wise vision implemented by the Emirates Heritage Club and its research and scientific centers.
His Excellency Sheikh Abdul Malik bin Kayed Al Qasimi praised the efforts of the Emirates Heritage Club in preserving the heritage of the UAE, educating generations about the heritage of fathers and grandfathers, organizing and developing activities related to the country’s heritage, and conducting research and studies related to the Emirates’ heritage and popular literature, such as poetry, stories and proverbs.

His Excellency also blessed the club’s efforts in spreading intellectual and cultural awareness to deepen the patriotic sense of the children, and the club’s keenness to confirm commitment to the heritage of parents and grandparents, and to enrich themselves with all the data of culture, knowledge and sciences related to that, and the club’s initiatives in organizing exhibitions related to the heritage aspect.
He praised the efforts of the Zayed Center for Studies and Research at the club in deepening the role played by the Emirates Heritage Club in preserving the heritage of fathers and grandfathers through scientific research, organizing and developing heritage activities, spreading intellectual awareness of heritage and its importance, conducting heritage and historical studies and research, in addition to preparing qualified cadres of citizens. Researchers, to ensure the achievement of the club’s goals.

He listened to a detailed explanation from the Emirates Heritage Club delegation about the club’s most important initiatives and future plans, which aim to preserve and preserve heritage in all its forms, pass it on to the younger generations and promote it in them and introduce others to it, and support the heritage culture and support it with everything that enhances its spread and supports its vitality.
The club’s delegation toured His Excellency’s Personal Museum, which is one of the largest personal heritage museums in the region, and includes more than 40,000 heritage pieces representing the history of the Emirates. The delegation was also briefed on His Excellency’s literary library, which includes a collection of poetry collections of his and the late, God willing. , Sheikh Dr. Saud bin Kayed Al Qasimi.