A year after the successful launch of the “Probe of Hope”, the first mission led by an Arab country 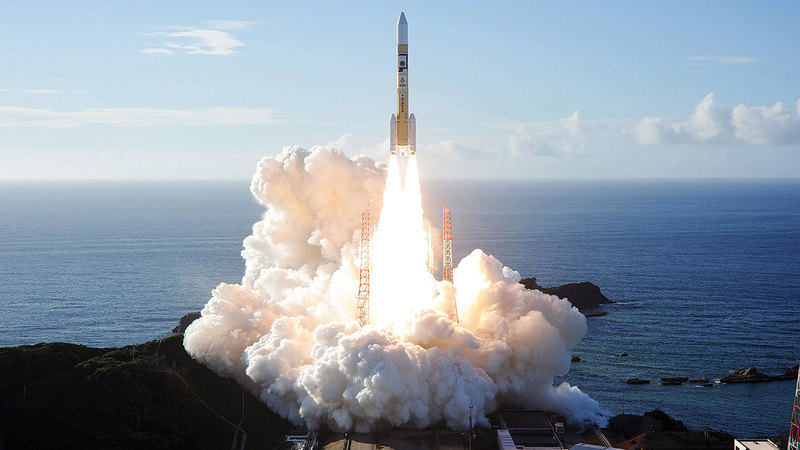 The Emirates Mars exploration project, “Probe of Hope”, celebrates today the one-year anniversary of the successful launch of the probe aboard the H2A rocket to its historic flight from Japan’s Tanegashima base on July 20, 2020, while the “Hope Probe” that orbits around The Red Planet is currently on its scientific mission to collect information and data that humanity has not previously accessed.

Since its launch on its historic journey to explore the red planet, the “Hope Probe” has traveled more than one billion and 150 million kilometers, including the distance between Earth and Mars’ orbit, which is 493 million kilometers, in addition to its orbit around Mars a full cycle every 55 hours, since its arrival in orbit.

The 20th of July 2020 represents a luminous station in the history of the Emirates Mars Exploration Project, “Probe of Hope”, as it embodies the magnitude of the challenges that the project team was able to successfully overcome to complete the launch on time, especially since the process of transferring the probe from Dubai to the launch station in Japan took place in The “great closure” and the suspension of air traffic that the world witnessed remained as part of a package of precautionary measures to combat the global outbreak of the emerging Corona Virus (Covid-19) pandemic.

This day also marks a historical moment represented by the launch of the first planetary exploration mission led by an Arab country, to become the UAE later, specifically on February 9, 2021, the fifth country in the world to successfully reach the orbit of Mars, thus crowning more than seven years of hard work. And the dedication to the work team that continued day and night and raced ahead of time in order to achieve this historic scientific and space achievement.

Sarah bint Yousef Al Amiri, Minister of State for Advanced Technology and President of the Emirates Space Agency, said: “The 20th of July 2020 is an important milestone in the UAE’s scientific and space progress, when the (Hope Probe) was launched into space, successfully overcoming all the challenges that faced the project thanks to dedication and perseverance. Staff. One year since the probe launched into space coincides with the successive scientific achievements of the probe by sending valuable and unprecedented data and information about the Red Planet, in implementation of its scientific mission, which continues until May 2023.

For his part, Hamad Al-Mansoori, Chairman of the Board of Directors of the Mohammed bin Rashid Space Center, said: “Since the launch of the Emirates Mars Exploration Project (Probe of Hope), the UAE has managed to strengthen its position regionally and globally in the space sector, becoming the fifth country in the world to reach the Red Planet. And to be the first Arab and Islamic country to achieve this historic achievement.”

In turn, the Director of the Emirates Mars Exploration Project “Probe of Hope”, Engineer Imran Sharaf, said that the probe is currently continuing its scientific mission in the Mars orbit, which officially began last May, and the unique oval orbit of the “Hope probe”, at an angle of 25 degrees, allows to collect a batch of Data and high-resolution images of the planet’s atmosphere every 225 hours, or 9.5 days, indicating that the probe, which is currently orbiting Mars once every 55 hours, has traveled about one billion and 150 million kilometers since the beginning of the scientific stage until today, of which about 493 million kilometers have traveled. Between planet Earth and the orbit of Mars.

The project was completed at half the normal cost of other scientific projects to Mars, where the cost amounted to 200 million dollars, and is considered among the lowest in the world compared to similar missions and projects, thanks to the efforts of the national engineering, research and scientific cadres.

In April 2020, the project team was able to overcome the challenges caused by the global outbreak of the “Corona” pandemic, and succeeded in transferring the probe from the Mohammed bin Rashid Space Center in Dubai to the launch base in Tanegashima, Japan, on a journey that lasted more than 83 hours by land, air and sea.

Immediately upon his arrival and after ensuring the safety of the probe and the scientific equipment it carried, the work team began preparing the probe for launch, and this process took 50 working days.

The challenges faced by the Emirates Mars Exploration Project team, the Hope Probe, did not end with its success in transporting the probe and preparing it for launch, as new challenges appeared related to weather conditions at the launch base, and as a result, the launch of the probe, which was scheduled for the morning of July 15, 2020, was postponed due to the circumstances. Inappropriate weather so that the work team reschedules the date within the “launch window” from July 15 to August 3.

On July 20, 2020, the launch process took place successfully at 01:58 am UAE time, and for the first time in the history of space missions for space exploration, the countdown is echoed in Arabic, amid intense follow-up by local, regional and international media.

Over the next seven months, the “Hope Probe” traveled 493 million kilometers, and during this trip the team carried out several successful operations to direct the probe’s path, which passed during this trip six stages, in addition to the launch stage: early operations, navigation in space, And the entry to Mars, and the transition to the scientific stage, and the scientific stage.

On schedule, the probe successfully entered the orbit of Mars, making the UAE the fifth country in the world to achieve this historic achievement, and the first to reach the Red Planet during 2021, before two similar missions launched into space simultaneously with the “Probe of Hope” mission, led by China and the United States. .

On April 14, 2021, the “Hope Probe” succeeded in moving from the capture orbit to its scientific orbit, through a set of maneuvers in which the probe’s engines were operated for 510 seconds.

On May 23, 2021, the Emirates Mars Exploration Project, “Probe of Hope”, announced the completion of the necessary preparations to start the scientific mission of the probe, after conducting the necessary tests to ensure the accuracy and safety of the scientific devices it carries on board, which proved that the performance of these devices exceeds expectations. The scientific mission of the “Hope Probe” was officially launched on the same day, and will last for two years, with the aim of obtaining the first complete picture of the various layers of the Martian atmosphere during the day and night, and all seasons of the Martian year, which is equivalent to two Earth years.

The EXI digital exploration camera carried by the probe has captured more than 500 images of Mars since the probe moved to the scientific orbit in early April 2021, and the camera will now focus on mapping the clouds of icy water in the Martian atmosphere, coinciding with the entry of the red planet into the “cloudy season.”

As for the EMIRS infrared spectrometer, since the “Hope Probe” entered the orbit of Mars, the scale on board the probe has worked to collect explanatory scientific data, calibrate the scale correctly, in addition to processing the data collected routinely and periodically.

In all, the scale has collected more than 130,000 spectral images since its arrival on Mars, and provided the team with more than 40 previously planned explanatory scientific observations covering a large part of the day on Mars.

As for the EMUS ultraviolet spectrometer, since the arrival of the “Hope probe” to the orbit of Mars, it has been able to collect important explanatory scientific data, which are about 14,000 spatial spectroscopic images of the atmosphere, and it has shown the initial operation of four different types of scientific operations by this method. The device works perfectly, and accurately tracks targets in its field of view.

On June 30, the Emirates Mars exploration project, “Probe of Hope”, revealed the first images of its kind that fully and unprecedentedly monitor the phenomenon of “Discrete Aurora” in the atmosphere of Mars at night.

On February 14, 2021, the first image taken by the “Hope Probe” was published, while it was in the orbit of Mars, of the red planet according to the set time plans, marking the beginning of the stage of collecting 1000 gigabytes of new data on Mars. Millions of people in the UAE, the Arab world and the world followed this image with passion, which will be immortalized in the history books as the first image taken by an Arab probe that reaches the farthest point in the universe, and the first image of Mars with modern and innovative scientific devices managed and operated by Emirati Arab national competencies within the mission “Probe”. “Hope” is the key to providing information, data and images about the atmosphere of Mars.

The image taken at sunrise shows Olympus Mons volcano, which is the largest volcano on Mars and the largest volcano in the solar system. The image was taken at an altitude of about 25,000 km above the surface of Mars, and in the upper left part of the image appears the north pole of Mars, and the volcano Olympus Munis can be seen in the center of the image with the emergence of sunlight. The image also clearly shows the three volcanoes close to the equator on Mars, which are the summit of Ascarios, the summit of Pavonis, and the summit of Arcia.

An idea in Sir Bani Yas

The Emirates project to explore Mars, “Probe of Hope”, began as an idea that was put forward in the government retreat in 2013 on Sir Bani Yas Island, among other ideas to celebrate in a distinctive way the 50th National Day of the country in 2021. On July 16, 2014, sending a probe to explore Mars shifted from An idea that has been carefully studied and planned for a strategic national initiative announced by His Highness Sheikh Khalifa bin Zayed Al Nahyan, President of the UAE, and His Highness Sheikh Mohammed bin Rashid Al Maktoum, Vice President and Prime Minister of the UAE and Ruler of Dubai, under the name of the Emirates Mars Exploration Project. The name “Probe of Hope” was chosen to be a message of hope from the UAE to the youth and peoples of the region and the world.

• The “Probe of Hope” has covered more than one billion and 150 million kilometers since its launch until today.

• The UAE is the fifth country in the world to successfully reach the orbit of Mars.