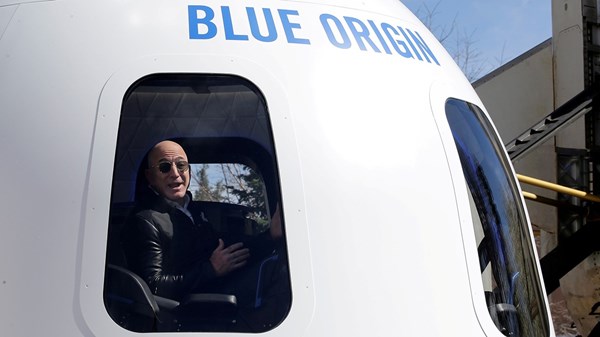 For $28 million, a person won a seat on a spaceship that will set off on a journey with the world’s richest man at auction on Saturday.
The person, whose identity was not immediately announced, won a seat alongside American businessman and billionaire Jeff Bezos at the conclusion of a month-long bidding process for a seat on the pristine flight of the spaceship that will be launched by “Blue Origin” next month.
Within four minutes of the open call auction starting Saturday, bids topped $20 million. The auction closed seven minutes after it began.
Blue Origin’s launch of the New Shepherd spacecraft from West Texas on July 20 will be a defining moment at a time when American companies are advancing toward a new era of private commercial space travel.
Bezos, the world’s richest man and CEO of Amazon.com and an avid space enthusiast, is racing against time to overtake billionaires Richard Branson and Elon Musk in space exploration and be the first of three to travel outside Earth’s atmosphere.
“Seeing Earth from space changes you, it changes your relationship with this planet, with humanity,” Bezos said, in a video clip before the final bid. He added that his brother Mark would join him on the trip.