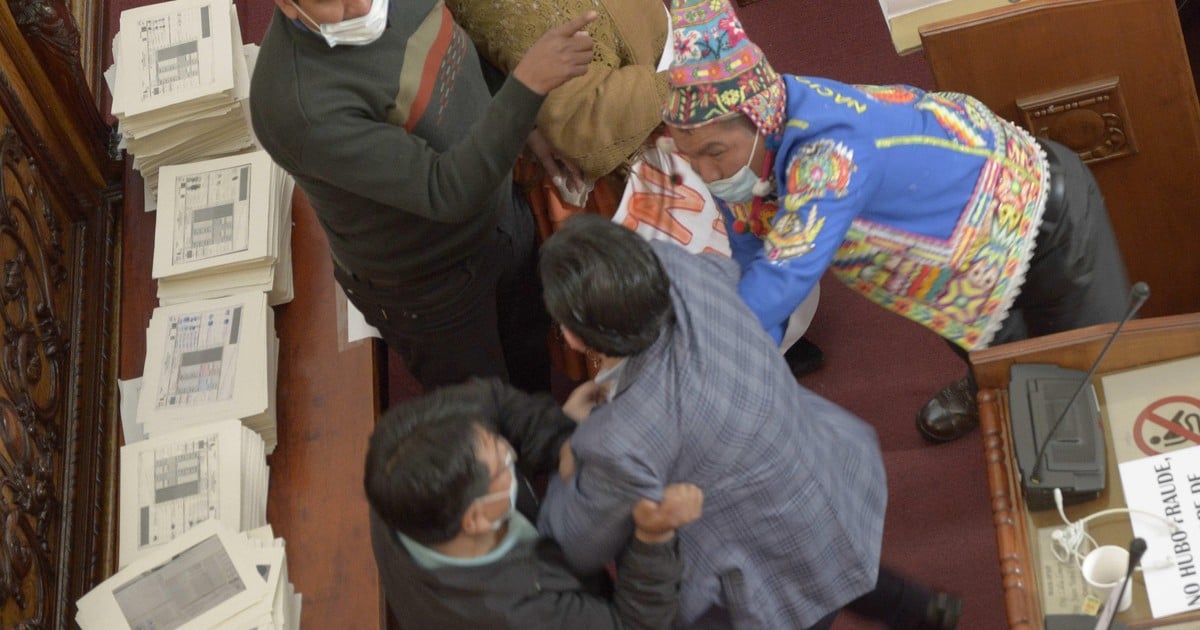 A session of the Legislative Assembly of Bolivia called to question the Minister of Government, Eduardo del Castillo, about the arrest of former President Jeanine Áñez, ended in a brawl between parliamentarians of the Movement Toward Socialism (MAS), and the opposition.

From the beginning of the session, in which it was expected to know the progress in the investigation of the alleged 2019 coup, there were Accusations and shouting insults between parliamentarians and, in the end, the tension has led to a fist fight between two legislators.

The projection of a video showing acts of violence that occurred before and after the resignation of former President Evo Morales led to the Henry Montero, from the opposition party Creemos, and Gabriel Antonio Colque from MAS will end with blows despite the fact that the president of the Chamber of Deputies, Freddy Mamani, had stopped the session on several occasions.

The fight took place within the framework of the interpellation of a minister for the situation of Jeanine Añez. Photo: EFE

Later, Montero publicly apologized for what happened. “A thousand apologies to the Bolivians, we will continue fighting, not with aggressions, not with the physical. But I ask that the authorities respect us, that they do not tell us criminals, murderers, and that they do not use pain for the deceased,” he remarked according to the daily El Duty.

The session opened with the reading of the names of those killed in Sacaba, within the framework of the repression by the Police and the Armed Forces of the 2019 post-election protests, and a minute of silence.

Then followed the intervention of Del Castillo, who appealed to the opposition to “commit to vote in a judgment of responsibilities against Jeanine Áñez and his mafia clan “, according to ‘La Razón’.

Likewise, Del Castillo called the document of the Organization of American States (OAS) on the irregularities in the 2019 elections a “pamphlet”. “In our country there was no electoral fraud and all the people around her (Áñez) did everything everything possible to consummate a coup, “said the minister.

“Since Mrs. Jeanine Áñez took office, there have been deaths, injuries, and unjustified imprisonment, with that they came to rob us and looted us in the middle of a pandemic“said Del Castillo according to a statement.

For his part, opposition deputy Erwin Bazán affirmed that Del Castillo I was looking to “manipulate” what happened in November 2019. “Murillo’s apprentice, Murillito, really yes, from now on you are not going to be a minister, you are going to be a film director with those projections, with those images you are a manipulator, playing to be Minister of Government” Bazan said.

Given these comments, Del Castillo responded that he seeks union “so that these people who have been on pilgrimage for more than a year obtain justice.” “I ask Bazán that we differentiate ourselves, that this legislature be different and that we not only shout and hold on to each other,” he said.

Finally, despite the tensions, the parliamentarians ratified their support for the minister’s management of government on this issue with the vote of the MAS and the minister has come out on the shoulders of the session.

The situation of Jeanine Añez

Áñez has been in preventive prison since March 15, accused of sedition, terrorism and conspiracy for his role in the framework of the post-electoral crisis of 2019. Bolivian authorities are investigating the case, known as the coup d’etat case, after the complaint of the former deputy of the Movement Toward Socialism (MAS) Lidia Patty.

Two months after her arrest, the former president denounced that the Bolivian authorities “have not presented a single piece of evidence” to support the accusations against her. “I am a political prisoner that’s the only reality, “he said.