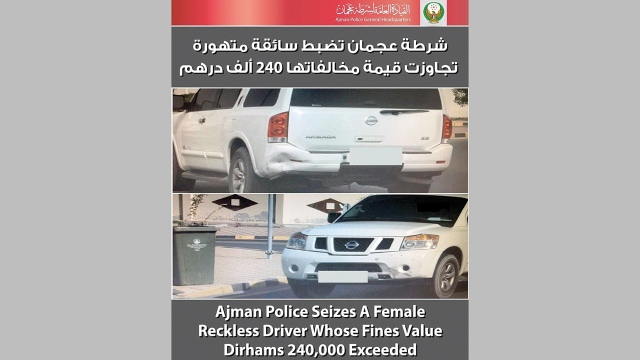 The General Command of Ajman Police managed to seize a vehicle whose driver committed 414 traffic offenses whose value exceeded 247 thousand and 490 dirhams, most of which were seized by radar to exceed the speed limit on the road.

Major Rashid Hamid bin Hindi, Head of Traffic Investigation and Control Department at the Traffic and Patrols Department at Ajman Police stated that police patrols detected a vehicle whose driver committed 414 violations, at a rate of four violations per week over a period of three years.

By investigation, it became clear that the vehicle belonged to an Arab woman of 30 years of age, traffic offense amounting to 247 thousand and 490 dirhams accumulated on her, and the vehicle was seized until the full amount was paid, and it was found that the cause of the violations was negligence and lack of attention to the speed of the road, and in the event of non-payment within six months The vehicle will be sold in the public auction for the sale of the vehicles, with the traffic file closed, which results in the inability to perform any traffic transactions until the amount due is paid.

He explained that excessive speed is one of the most important causes of accidents on the roads, and it falls under the clause of aggravated offenses, and the violation of exceeding the speed limit set by more than 80 km / hour amounts to imposing a fine of 3000 dirhams, in addition to 23 traffic points for the driver’s record, and the vehicle seized For a period of 60 days, while the violation of exceeding the speed limit by more than 60 km / h amounts to a fine of up to 2000 dirhams, 12 traffic points, and seizure of the vehicle for a period of 30 days.

Major Bin Hindi called on drivers to abide by traffic and traffic rules and pay attention to the speed limit signs for each road, to avoid traffic violations and accidents, in order to ensure the safety of lives and property.

Are you burned out at work? Symptoms and consequences of a disorder aggravated by a pandemic year