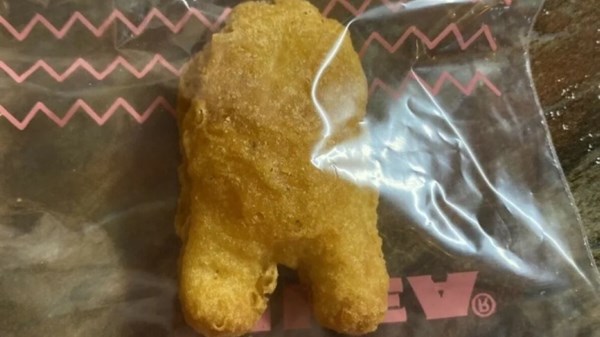 Ahmed Atef (Cairo)
eBay is witnessing many strange sales, where bids are held on all kinds of purchases, but the strangest thing that has been sold in recent days is a chicken piece that has reached a price of 100,000 dollars.
What made this piece special is that it came in the form of a member of the famous game team “among us” or “umong us”, and the offer was initially from the seller who asked for a very small amount, on May 28, as he put it for sale for 99 cents, and received an offer for only $5.
The company “McDonald’s” that owns the chicken piece that resembles the game, has attached information that its validity expires after fourteen days, and that it will accompany some of the Szechuan sauce for those who buy it.
In the first two days, there was no appetite for a piece of chicken “Between Us”.
But two days after the offer of the chicken, which some described as a traitor – in relation to the traitor that players are looking for in the game – its price suddenly rose to nearly $ 15,000, when someone made an offer of such a huge amount, and the sale was not done despite the huge return offered, Bids continued until a piece of chicken was sold for $100,000.
Bidders did not expect the traitorous chicken to sell at this number. They wondered if the buyer would eat it for dinner after paying such a huge amount, but the seller was professional. He confirmed that he will pack the piece in the safe way, and send it before expiration so that it is completely safe and edible.