A new march on the Obelisk to protest against restrictions 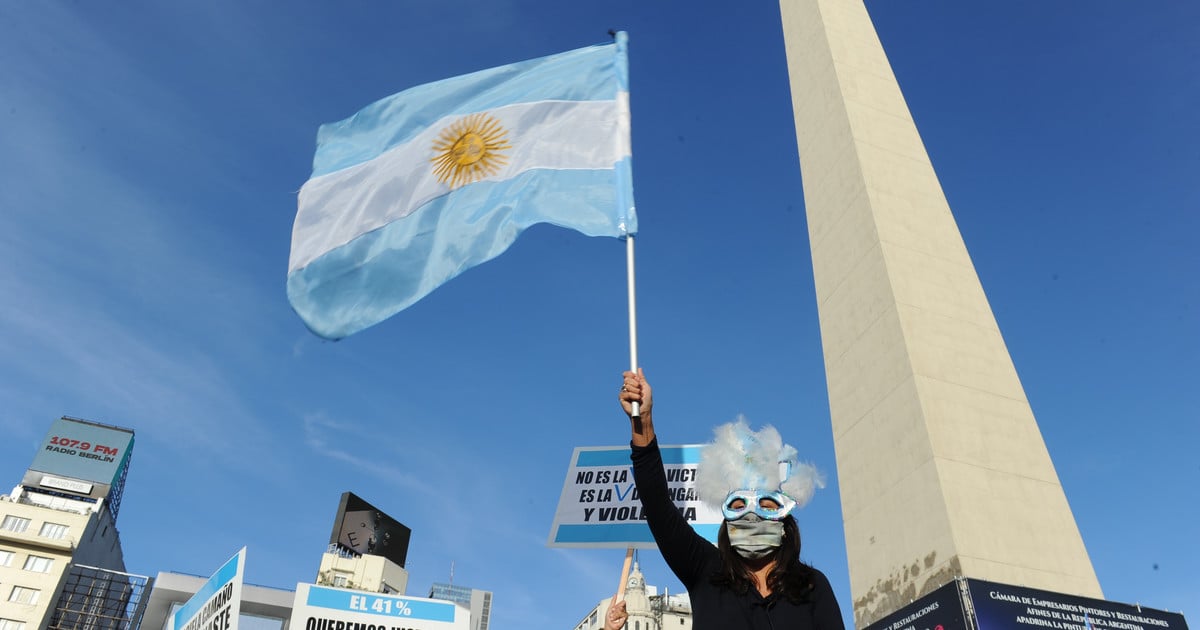 A group of protesters met this Saturday at the Obelisk to protest against the restrictions imposed by the Government in the AMBA due to the growth of coronavirus cases.

The demonstration began shortly after 5 p.m., with a small group of people displaying Argentine flags and banners. “All work is essential,” protested one of the posters. “Bars are not contagious”, indicated another.

The claim focuses on the 15-day suspension of face-to-face classes, a measure resisted by the Buenos Aires government, and the circulation limitations night and the possibility that the primary elections scheduled for August will be postponed.

One of the posters against restrictions on movement and limitations to work. Photo Juano Tesone

“For freedom, for the Republic. The streets are ours,” claimed one of the flyers issued to call for the mobilization, scheduled for 5 pm in downtown Buenos Aires.

The measures ordered by President Alberto Fernández through a DNU came into effect this Friday.

The shops had to close their doors at 7:00 p.m. – the restaurants are enabled to continue working but under the delivery or “take away” format – and between 8:00 p.m. and 6:00 p.m. this Saturday, only essential workers who had processed the permit.

The restrictions will continue until Friday 30. On the first night, there was little movement in the street, with police checkpoints at the main entrances to the City. In Palermo, the bars and restaurants complied with the measure, with a few exceptions.

At the same time, some of the protesters targeted the government for the possibility of postponing the Simultaneous and Mandatory Open Primary elections (PASO).

One of the cars that approached to participate in the mobilization. Photo Juano Tesone.

Against the closure of schools

A group of self-convened parents will hold a hug next Monday in each of the schools their children attend to “claim presence” in the schools.

The call was organized by parents of students who attend private and public schools in the Metropolitan Area of ​​Buenos Aires (AMBA), whose activity will be to give a symbolic hug to the institution at 8 o’clock.

The claim comes in the midst of tension between the City and the national government, faced with the decision to suspend face-to-face classes for 15 days.

How much power does the coach have ?: A big problem for FC Bayern

Fashion – Barbara Blanchard: Advocate for Diversity and Inclusion in the Fashion World