A national ceremony honoring the victims of Corona in Germany 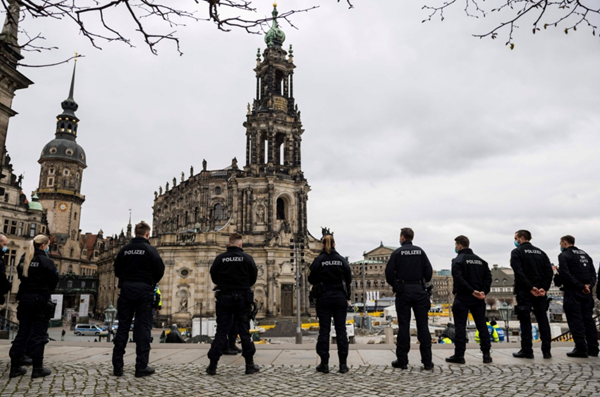 Today, Sunday, Germany will honor the memory of about 80,000 of its citizens, the Corona virus, in a ceremony that also aims to express solidarity with the families of the victims who died in isolation due to the Covid-19 epidemic.

After that, they will participate in a ceremony broadcast live on television at about 11:00 GMT in the “Konzerthaus” concert hall in central Berlin, where President Steinmeier will deliver a speech.
A limited number of people were invited to the ceremony due to the health crisis.
“It is very important that we stop honoring all those who died during the epidemic, including those who did not die of the virus but rather in isolation,” the German president said upon announcing the organization of this ceremony.

Meanwhile, the heads of the 16 German regions called on residents to light a candle in front of a window in their homes every weekend evening in a symbolic move.

In a joint appeal, they said, “We want to be aware of what we have lost,” as well as to “regain together strength and hope.”

President Steinmeier said it was necessary to move away from the daily statistics and realize that “behind every number there is a destiny.”
In March, Steinmeier met the relatives of a number of victims, who expressed their pain to him for the loss of family members, but also revealed their sadness for not being able to stand by them in their last moments or being able to organize funerals for them.

For months, many media outlets regularly published testimonies of relatives to give a face and a voice to the victims.

Organizing these ceremonies while Germany is sweeping a third wave of the epidemic characterized by the rapid spread of mutated mutations of the virus, which leads to an increase in the number of infections and deaths again. It took some time to start the vaccination campaign.
Heinrich Bedford Strom, head of the Evangelical Church of Germany, said, “The number of deaths is so great that at this particular time we need” national ceremonies of this kind “in which an entire community participates in honoring all these so many dead.
Meanwhile, it appears that measures to combat the virus in the country will be tightened.
Angela Merkel’s government wants to impose a national lockdown, including curfews and new restrictions on communications, with the aim of combating the virus more effectively and putting an end to the chaos of crisis management with areas with authority in the health sector.
In defense of a law that is supposed to strengthen her powers in the House of Representatives, Merkel warned Friday that “the virus does not allow fair procedures because they only exacerbate it.” Parliament’s approval is expected next week.