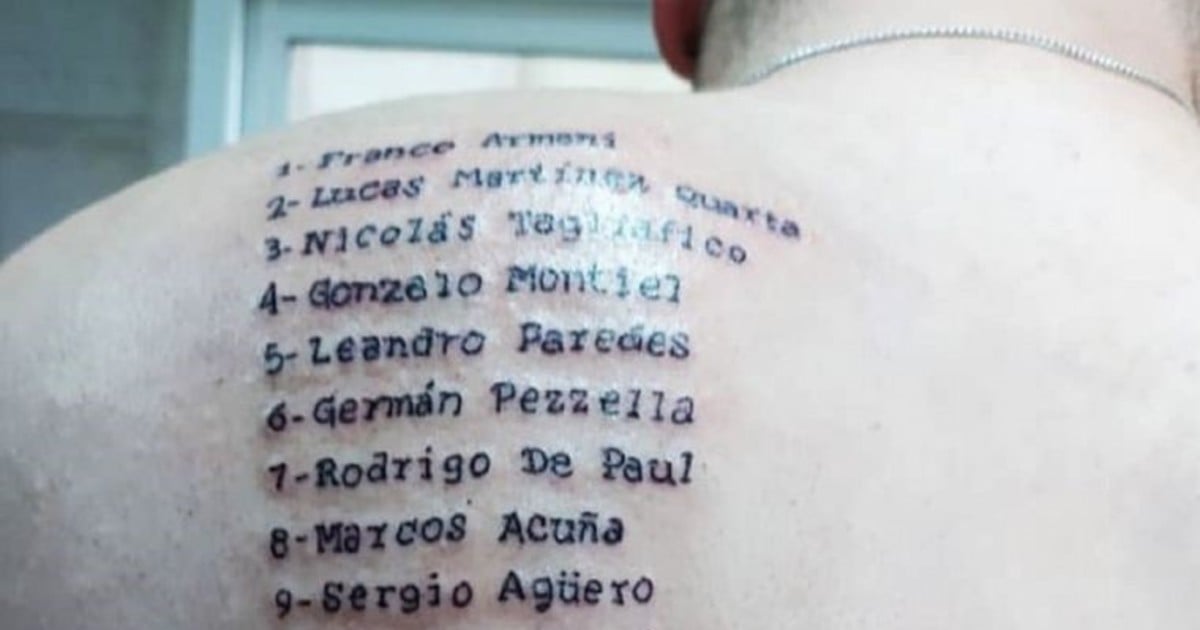 As the days go by, after the consecration of the Argentine National Team in the Copa América, they come to light more and more celebrations and promises that the fans did to celebrate the title obtained by the team led by Lionel Scaloni. In that sense, the tattoos were sharp.

From Lionel Messi kissing the Cup, passing through the trophy, to even the left foot of Ángel Di María that established the winning goal in the final against Brazil in the Maracana. There are several aspects that Argentines choose to immortalize with ink on their skin.

Precisely, a man from Cordoba had an original idea and the name of each of the members of the campus was tattooed Argentine, along with the date of the consecration (07-10-21) and the phrase: “I saw you champion !!!”.

The fan in question is called Marcos Armando, he is 29 years old and last Saturday he saw the national team lift an official title for the first time since he can remember, since he was barely a year old when the 1993 Copa América was played.

“It arose because they gave us joy and I did not want to make Lío (Messi) alone, but it was like a tribute for the whole team for the great joy they gave us Argentines ”, he explained in an interview he gave to Radio 102.9 Brinkmann.

For her part, Ely Forneris, who was the artist in charge of tattooing the 29 names (28 footballers and the technical director) on the man’s back, said that it took him two hours finish the work.

Far from being satisfied, Armando remarked that he is already thinking about the design of his next tattoo, in case the National Team manages to win the 2022 World Cup in Qatar: the World Cup in the center of the back, next to the list of players.

The Brazilian who got Messi to sign his tattoo

After the triumph of Argentina against Uruguay for the second date of the Copa América, the art that it immortalized went viral a brazilian fan on your body.

While waiting for the return of the National Team to one of the hotels in Brasilia, Leo’s fan showed the huge tattoo that he had on his back, with the 10 celebrating a goal against Real Madrid, showing his shirt at the Bernabéu. Messi saw that video, made him a promise and kept it: signed the back of the Brazilian.

Lionel Messi signed the back of a Brazilian fan.

A day later, the same fan went to the hotel in that Brazilian city and Messi saw him. At that moment, the Argentine 10, captured by TyC Sports cameras, changed the course of his walk and headed for the fences. The fans screamed that change of pace like a goal.

“Thanks, Messi!” They yelled at Leo as he arrived. The captain of the National Team grabbed the fibrón and stamped his signature. “Speechless, excited”, released the tattooed, who will now add the autograph to the tattoo. Yes, of course, it will be painted forever.