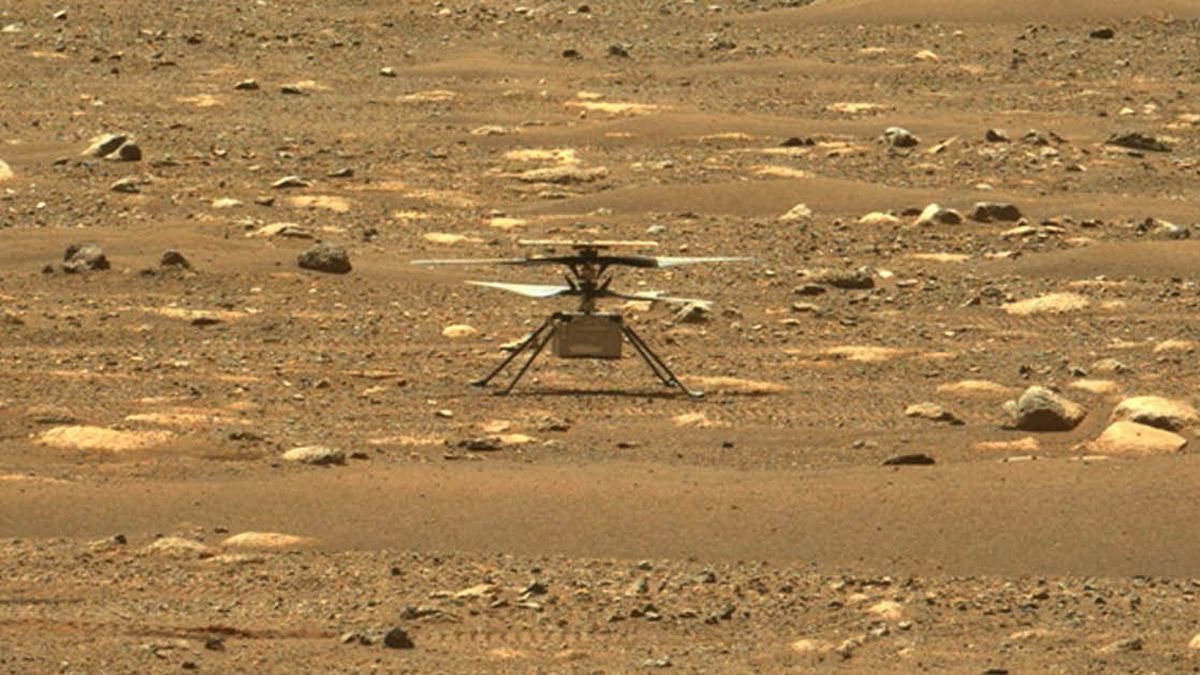 At last the Martian helicopter ‘Ingenuity’ has made its first flight: a vertical ascent up to three meters, a turn on itself, as if it were scanning the horizon around it, and to the ground again. Total: 40 seconds in the air. Half a minute longer than the Wright brothers’ first flight. But that one covered more distance: 40 meters; Ingenuity has not moved from the site.

The flight took place at Martian noon, when the wind could be calmer. That was the early morning in Spain, but the images were not seen until early afternoon. In part, due to the delay in communications with Mars (almost a quarter of an hour) but above all because of the time it took to transmit images and assemble them into a coherent video.

The Perseverance is parked about a hundred meters from the heliport Martian. At that distance, the small helicopter, which does not lift three feet off the ground, is barely visible. It was necessary to use the zoom of the camera at maximum magnification.

At ground level, the Martian atmosphere is equivalent to that of Earth at 30 kilometers high: almost four times the Everest and three times the level of flight of commercial aircraft

Why so far? On the one hand, to leave enough room for future maneuvers. But also for a measure of prudence: At ground level, the Martian atmosphere is equivalent to that of the Earth at 30 kilometers high: almost four times the Everest and three times the level of flight of commercial aircraft.

Under these conditions, to generate lift the rotors have to rotate very fast. So much so that their tips reach almost half the speed of sound. On Earth this can cause violent vibrations, but the very density of the air helps to dampen them; on Mars that help does not exist, so it was necessary to design some light but very rigid blades. If one were detached, it would be like a blade thrown at two hundred miles per hour. And nobody wants to imagine the consequences an impact against Perseverance would have.

The images of the Ingenuity fluttering captured by the rover have been sent to an orbiter (the Mars Reconnaissance Orbiter) that has been revolving around the planet for 15 years. From there, to the big antennas in Madrid, Canberra and California. And from there, to the JPL image processing computers, from where the mission is directed.

The helicopter transmitter only has a range of a few hundred meters so all communication is done via Perseverance. Its batteries, which first of all have to power the rotors, do not give much. For this reason, during the flight it only transmits altimetry information and low-resolution black and white photographs (a format similar to the old VGA of our computers: half megapixel). That is the camera that transmitted the first photo of the shadow of the Ingenuity on the rocks. These same types of images are those that allow the software on board to estimate the speed and heading of the apparatus based on analyzing the displacement of the rocks or the shadow itself.

The photos that the color camera may have recorded (much better quality: 13 megapixels) are too heavy to transmit in real time. They could be compressed, but engineers prefer to receive them raw so no detail. They will be sent to Perseverance after landing and once the Sun has recharged the batteries. And at relatively slow speed, so panoramic video can still take hours or days to view.

Open or closed: which world attractions can be visited in a pandemic