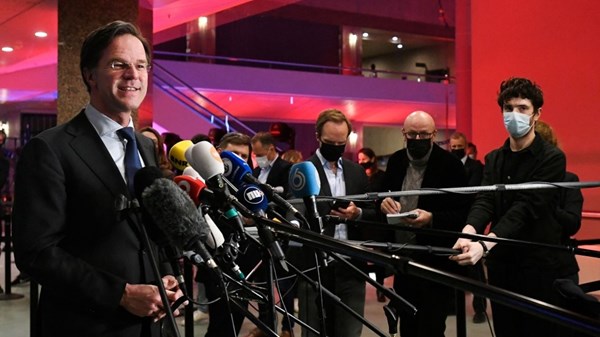 Dutch Prime Minister Mark Rutte announced that he had scored a “sweeping” victory in the legislative elections that took place on Sunday and constituted a test for his management of the Covid-19 crisis, pledging to use his fourth term to rebuild the country after the epidemic.
Exit polls showed that the liberal VVD (People’s Party for Freedom and Democracy) party led by Rutte, the longest-serving leader in Europe after 10 years in power, won the largest number of seats in Parliament after the three-day elections that took into account the divergence. Social.
And “VVD”, according to polls, managed to win 36 seats, after it had 33 seats in the elections that took place four years ago.
“The voters of the Netherlands have given my party a sweeping vote of confidence,” Roth said, smiling to reporters at the parliament.
“Not everything has gone well in the past ten years,” he said, referring to his resignation in January due to a scandal involving people accused of exploiting privileges for children on the basis of racism.
“But of course, the main topic on the table in the coming years is how to rebuild the country and move forward after Corona,” he added, noting that he has enough energy “for the next ten years.”
The main surprise was the strong performance of the “D66” party led by Minister of Foreign Trade Sigrid Kaag, which, according to the official “NOS” radio, came in second place, as it is expected to raise its parliamentary quota by about eight seats to reach 27 seats.

The rise in covid-19 cases collapses the Venezuelan health system

I am: Maricarmen Marín recommends Katia Palma to apologize