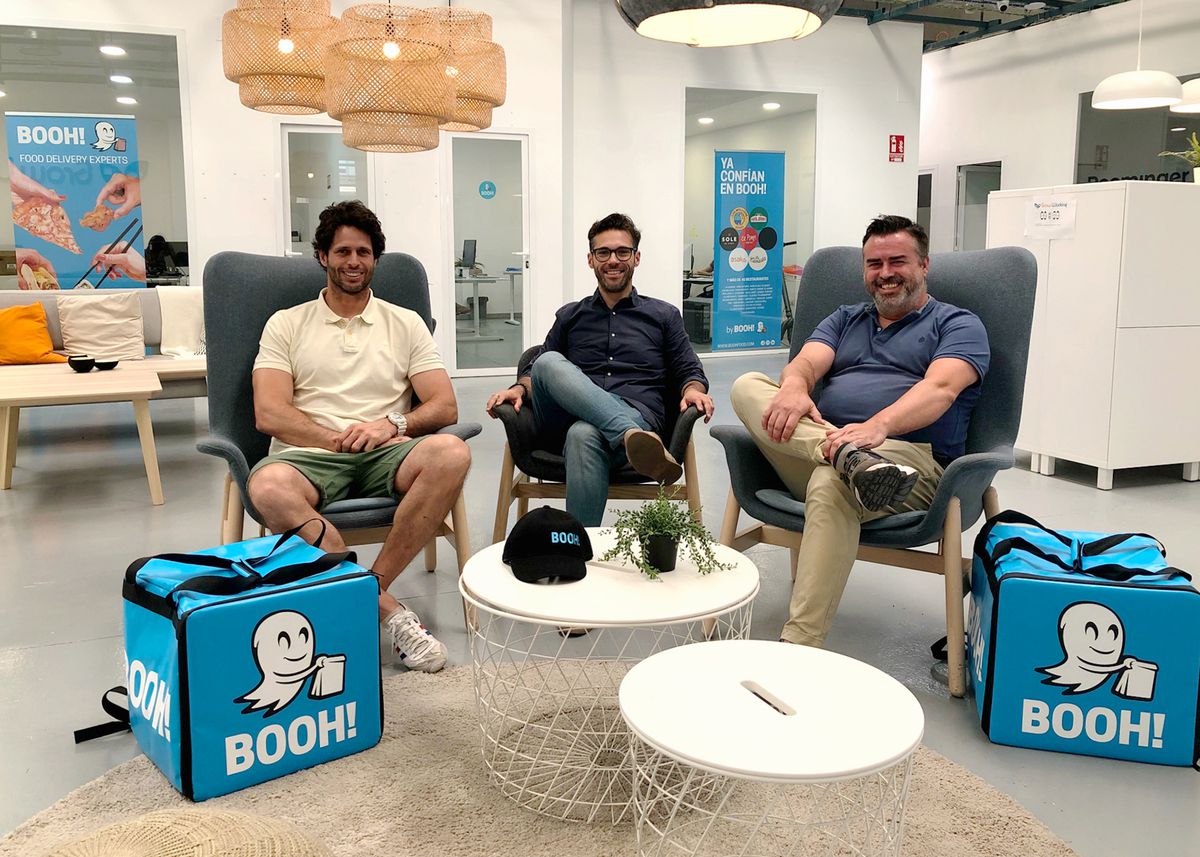 The first step of the start-up Booh! it was a failure. The businessman Daniel Bueno, 42, with experience in the sector on-line gastronomic, presented in 2018 a logistics platform that would help restaurants provide home delivery. He did it in the Demium All Startup Málaga entrepreneurship contest, but the award was won by another project. As a consolation, 15 others went through an incubation process for six months. It was there that he met Ángelo di Placido (38 years old) and Tomás Alegre (40), with whom he refined the business model. In 2019 they launched their first negotiation round and raised 250,000 euros. In 2020, the second, getting a million and opening its first headquarters in Malaga. Now they have launched the third to get ten million more and grow hand in hand with technology and make the leap to Granada, Seville and Zaragoza. If last year they billed one million, in 2021 they expect to exceed 2.5 million. Its gross margin varies between 14 and 17%. “You have to grow at the rate that the market asks of us, which is fast,” says Di Placido, the company’s marketing manager, who is confident of reaching a positive EBITDA of one million by 2023.

A walk through the company’s facilities in the Huelin neighborhood, west of the city of Malaga, allows us to understand its business model. In a warehouse of more than 400 square meters there are seven small kitchens of 15 square meters and one that triples that surface. They are the spaces that rent brands like Papa John’s, Izakuma, Healthy Poké or Taxi Angus. While they are cooking, the Booh! Team, made up of 24 people, takes care of everything else: from the comprehensive management of orders so that all the products ordered are delivered at the same time in the shortest possible time. with their own distributors (although they also work with platforms such as Glovo or JustEat). There are also counters for customer service in person or parking areas for riders.

The space, which they call bright kitchen (bright kitchens) to differentiate itself from the concept of dark kitchen (dark kitchens), works as a shopping center for restaurants where the customer can order from home all of them at the same time. “That is one of our competitive advantages: combining the products of all the brands that are hosted here,” underlines Daniel Bueno, who is the company’s CEO. Thus, in a family, parents can order sushi and their children hamburgers or pizzas, but they also have empanadas, arepas, salmorejo, Russian salad or croissants, among many other options. “To the traditional hospitality the vertiginous growth of the delivery It has generated frustration and problems, because you have to have great logistics to take on all orders ”, explains Bueno. In 2020, the home delivery of food generated a business volume close to 1,800 million euros in Spain, according to the consulting firm NPD, more than doubling the 2019 figures.

Booh! is based on two pillars. On the one hand, the purely real estate when charging a rent to the restaurants housed in their kitchens. On the other, a canon and a commission of between 8% and 10% on company orders depending on the sales channel. The companies that have opted to rent their kitchens are mainly large chains and gastronomy groups that have seen that the formula is an opportunity to land in a city where they had little or no presence. The start-up Malaga makes it easy for them to set-up and offers them all the infrastructure so that sales start immediately the first day they start cooking. “That is their only job,” emphasizes Angelo di Placido, who explains that every Tuesday they meet with members of the hosted firms to analyze the previous week, find out what has sold the most and organize joint marketing campaigns.

At the moment they manage between 5,000 and 6,000 orders per month only in their center in Malaga, although they have the capacity to multiply those figures by three. The technological component is, according to the creators of the start-up, one of the bases that will allow it to grow exponentially. They have a team of traffic managers that comes through their website, by phone or other aggregators. Another department analyzes consumption habits to the millimeter to optimize processes. In Malaga it has allowed them to know which neighborhoods are the ones that ask for the most food at home (those in the west, with a higher population density, hence the location of their facilities). Also that the number of orders has its peak hour at three in the afternoon, much later than they expected, or that Sundays are the day with the highest volume.

This tool is the same one that they also use to find out how the market works in the cities where they intend to grow. This year they will arrive in Tijuana (Mexico) and San Diego (United States thanks to an agreement with the American Jelp, but they will also do so in Spain landing in Granada, for next year they will do so in Seville and Zaragoza. Booh! He prefers to bet on that profile of average capital compared to places like Madrid, where competition is greater, although they do not rule it out in the future. Their goal is to reach one million annual orders in 2022, multiplying the current ones by 14. They also work to further optimize their processes and minimize costs with greater technological and robotic presence.