A global bank detonates the “European Super” sedition, with an offer of 5.5 billion euros 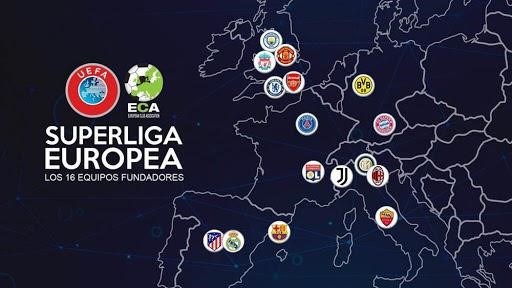 The European sports arena is witnessing an unprecedented sporting revolution, with some international clubs led by Real Madrid trying to establish the European Super League, after the relationship with UEFA reached a dead end, due to the latter’s insistence on distributing his wealth in general and not according to the capabilities and value of the clubs participating in the Champions League.

While the question was raised about the cause of that crisis by encouraging major international clubs to declare rebellion and disobedience against UEFA for the first time, as the curtain was revealed behind the “European Super” crisis, and some of the features of the drivers of that issue that sparked controversy during the past hours appeared, and what was officially announced by the bank. The American GB Morgan has funded the European Super League and the American bank has stood behind the curtain over the past months and moves things exceptionally, and the history of world football may stop for a long time, especially if GB Morgan succeeds in its aspiration with the support of major clubs.

GB Morgan is a US multinational financial services bank, which is the largest bank in the United States with total assets estimated at $ 2.515 trillion, and is the main provider of financial services based on the Forbes magazine ranking and is the third largest publicly traded company in the world. The American global bank will pump into the idea of ​​the European Super, which is a revolt that is the most dangerous in the Champions League, up to 5.5 billion euros, which will guarantee the income of each participating team that is 4 times more than what it would get if it won the current Champions League.

During the past few hours, the world was preoccupied with the “European Super” sedition, after 12 major clubs in Europe announced the launch of the European Super League led by Florentino Perez, President of Real Madrid, before UEFA and FIFA responded by objecting and threatening to impose penalties that could reach exclusion from the 2022 World Cup for all players participating in the tournament. European super.

While a new document was published today, broadcast by the Associated Press, it appears that European clubs seeking to establish the Super League are bent on moving ahead with their project despite the objections of FIFA and UEFA. Where it confirms that it will take legal measures aimed at avoiding any obstruction by the two federations. The 12 clubs wrote to Infantino and Ceferin saying: Your official statement forces us to take preventive steps to insure ourselves against such a backlash, which would not only jeopardize the commitment to funding under the Grant but would be illegal. And she continued: For this reason, the “Super League” company submitted a request to the relevant courts to ensure that the tournament was launched smoothly in accordance with the laws in force, and GB Morgan bank succeeded in igniting an unprecedented global crisis that may be a cause for forever changing the face of the global football we know. After the offer of 5.5 billion euros, through which he will dominate the European football market around the world.