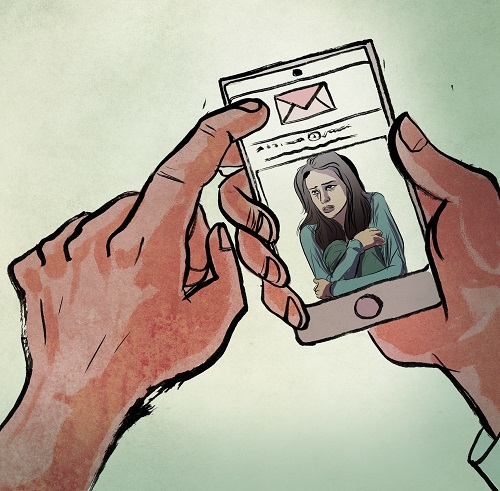 0
SHARES
1
VIEWS
Share on FacebookShare on Twitter
A (Gulf) young man assaulted the sanctity of the private life of a (Gulf) girl and published her photos through the (Snapchat) program, after she gave him the password for her account without thinking about the consequences of that, and a total civil court in Ras Al Khaimah ruled, obligating the young man to lead to the girl 7464 A dirham in compensation for the material and moral damage incurred, and obligated him to pay fees, expenses and attorney fees.
The Public Prosecution in Ras Al Khaimah had referred the accused to the Criminal Court on charges of infringing the sanctity of her private life, publishing her photos using an information technology means, and exploiting communication devices to hurt her feelings for an illegal purpose. The Criminal Court fined the accused 5,000 dirhams.
In detail, a girl filed a lawsuit in which she stated that a young man had assaulted the sanctity of her private life and published her photos via Snapchat, which caused her material damage as a result of publishing her photos on social networking sites.

In the ruling, the court confirmed that it was established in the investigations of the Public Prosecution that the young man confessed to entering the girl’s Snapchat program after she gave him the password, as it was found from the search and investigation report that there were pictures of the girl in the program, pointing out that the court saw the evidence of the young man’s mistake because he entered through One of the means of information technology is the account of the girl in cases other than those authorized by law, and he was convicted by the criminal court of that
She explained that the girl had suffered material damage, represented by making the fees for photographing the case file and following it up, as indicated in the receipts attached to the case, and the court estimated the value of the material damage at 464 dirhams.
She added that the young man’s entry into the girl’s account via the (Snapchat) program and access to her photos and keeping them is a violation of her privacy and an infringement on her, which makes the moral damage she inflicted fixed because of her sadness and fear of the possibility of publishing her photos and exploiting them for other purposes, and the court estimated it at a value of 7000 dirhams, and ruled The court obligated the young man to pay the girl 7,464 dirhams in compensation for the material and moral damage she had suffered, and obligated him to pay fees, expenses and attorney fees.