A fourth wave of the new variant? Cases rebound in 17 provinces 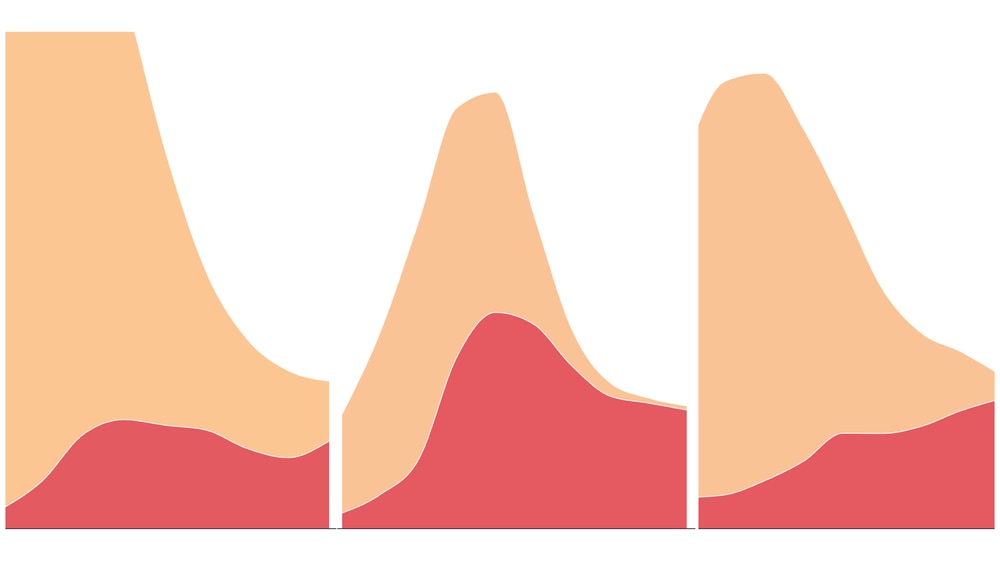 The decline in covid-19 has slowed in Spain. After the peak in January, cases and income fell at a rapid and constant rate until 10 days ago: since then, infections have stopped decreasing in about 30 provinces and there are several, such as Cáceres, Ciudad Real or the three Basques, where they already rebound.

This change in trend hides a kind of double pandemic. At least since Christmas, an epidemic of old variants and another of the new variant B.1.1.7, discovered in the United Kingdom, have been circulating in Spain at the same time, more transmissible and, according to several studies, more lethal. That strain spread in January and is dominant in almost all communities. And what is more important, its evolution is different: the cases of old variants have continued to decline since January, but those of B.1.1.7 are stagnant and even rebound in Catalonia, Navarra, the Basque Country or Madrid.

The data in the previous graph are an estimate calculated with the total number of cases in each community and the percentages of variant B.1.1.7 reported by the Ministry of Health in its report this Thursday.

The data make it clear that the variant is already dominant: B.1.1.7 is responsible for 50% of the cases in almost all the communities and exceeds 80% in Asturias (96%), Catalonia (85%) and Cantabria ( 83%). It is a phenomenon that has occurred in many countries: this variant already it is the main one in much of Europe, as in Denmark, Germany, Switzerland, the Netherlands, Belgium, Sweden, Poland or Norway.

But what can be seen in Spain now is that the new variety has a different evolution from the total number of cases. Although the accumulated figures fell, the positives for B.1.1.7 had been maintained since February in almost all the communities. This differentiated trend has also been seen in other countries, such as France or Denmark. In the Scandinavian country, for example, a week ago it was estimated an R (variable that estimates the rate of new infections) close to 1 for total cases, but 1.14 for B.1.1.7, which indicates growth: for each case, on average more than one person. There they are sequencing the genome of almost all cases, tens of thousands, so they have very accurate information of evolution by strains (in Spain, low sequencing is still a problem).

How is it possible that one variant slows down and another does not? It may be that the level of contacts in Spain, due to the level of restrictions and our behavior, is sufficient to stop old strains, but is at the limit or is insufficient against more transmissible variants such as B.1.1.7. This could explain rallies even with constant levels of contact: when B.1.1.7 was not very widespread, its advance paled compared to the retreat of the rest of the strains, but now that the roles have been exchanged – and there are more cases of the new one – , it will be their evolution that dominates. As Saúl Ares, a researcher at the National Center for Biotechnology, explains, “It is the most worrying thing: not that there is a slowdown or plateau in the drop in cases, but that, in reality, B.1.1.7 has been rising with a dynamic that is you can see and it will replace the current one ”.

It is still not clear that a more transmissible variant requires much more drastic measures, as pointed out by the Computational Biology and Complex Systems team of the Polytechnic University of Catalonia. One of its researchers, Enric Álvarez, indicates that since there is still little information on the new variant, it will be key to “lift the measurements very gradually, with two weeks of margin and following the curve very well to try to ensure, at least , that it is always possible to take a step back and regain control in the event that cases are triggered in April ”.

The advance of the variant adds another complication: there are signs of an increase in mobility – according to data from Apple or Google– which generally translates into more contacts between people and more opportunities for contagion.

The upturns by province

The following graph shows the evolution of six representative provinces, with the data collected by the project escovid19data of each community. Whether due to mobility or the advance of the new strain, the truth is that in 17 regions infections rebound by more than 10%, as occurs in Cáceres or Ciudad Real. In 14 other provinces, such as Jaén or Pontevedra, cases are stagnant, they are not rising, but they have stopped falling like weeks ago. There are also 21 provinces where the decreases continue, some even with a still fast and constant rhythm, such as Alicante or Ávila (with a logarithmic scale a decrease is seen in a straight line, as in the graph below).

The last table shows the information for each province: both the evolution of the incidence in seven days, and the change in one week compared to the previous one, which allows us to see where there are worsening. We use the weekly incidence, instead of the typical 14 days, to be able to detect earlier, and better, possible spikes.

Two positive news for the next few weeks are that winter is ending and that vaccination is advancing. More people are now immunized than ever, especially in residences, where virtually everyone has been vaccinated. This will reduce income and deaths per infected, because the population most at risk has been protected. However, there are still many people in their 60s, 70s and 80s who have not received the vaccine and who are still vulnerable to a fourth wave. Even more so if it is confirmed that the new variant, as they point out studies Nature Y Science, not only is it transmitted more easily, it is also more lethal.

To estimate the cases by variants in each community, the data of total cases published by the autonomous communities and compiled by the escovid19data project and the percentages of variant B.1.1.7 detected in each community according to the latest report from the Ministry of Health. In order to calculate the weekly incidence and the spikes by provinces, the data of cases from escovid19data have also been used.

Pavel Palazhchenko, Mikhail Gorbachev’s ‘last’ translator: ‘This is not the Cold War’