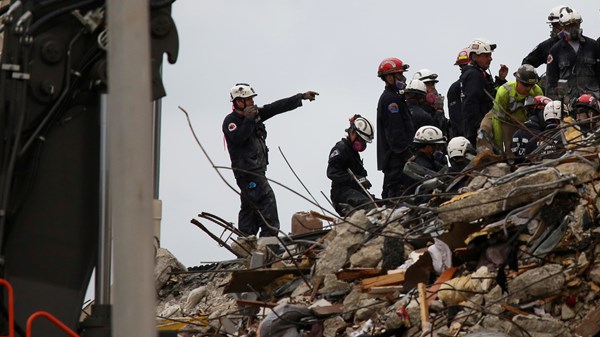 A firefighter found his daughter’s body while searching among the wreckage at the site of a building collapse in Miami, southeast Florida.
The British newspaper, “Mirror”, reported that the body of the 7-year-old girl was pulled out of the rubble in front of her father, the firefighter who came to intervene in the disaster that the city witnessed days ago.
Next, the father wrapped the girl’s body in his jacket and placed it on a stretcher.
Then the stunned father, his brother, and the other rescuers, who helped exhume the body, escorted her along with a group of police and firefighters. She did not reveal the identity of the victim and her father.

The death toll rose to 20 after two bodies were pulled from the rubble on Thursday night. There are still up to 128 people missing.
The largest part of the 12-storey Champlain Tower, which overlooks the ocean in Surfside, near Miami Beach, collapsed on June 24, while residents were asleep, in one of the most serious disasters in US history.
The authorities and experts confirmed that the reasons for the collapse of the tower are still unknown. But a report on the condition of the building, early in 2018, indicated that there was “significant structural damage” as well as “cracks” in the basement, according to documents released by the Surfside City Department on Friday evening.