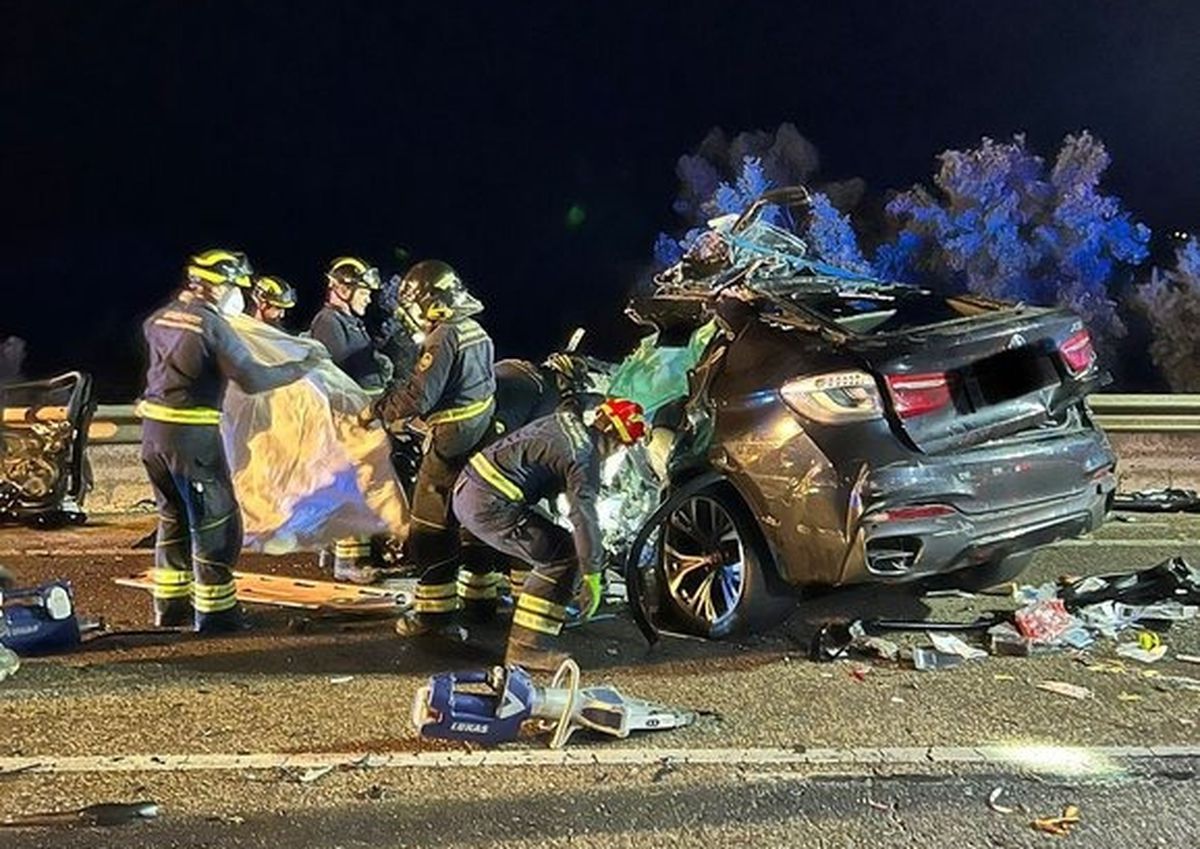 A man and his minor son have died in the early hours of this Friday in the Valladolid town of Peñafiel (5,000 inhabitants) when their vehicle collided head-on with a truck. The boy’s friend, 12 years old, who was also traveling in tourism, has been seriously injured and has been transferred to the Clinical Hospital of Valladolid, where she remains hospitalized. The transporter, protected by the cabin of the truck, has escaped unharmed. The accident occurred around 2:00 on the outskirts of the town, on the N-122 national road that crosses the municipality, a road historically criticized for its high level of danger and for the delays in its transformation into a highway. The causes of the fateful incident are unknown at the moment.

The collision of the car with the refrigerated truck occurred at kilometer 304 of the highway towards Burgos and required the intervention of agents from the Valladolid Civil Guard, the Peñafiel local Police, the Valladolid Fire Department, specialists in psychological assistance, two mobile ICUs and an ambulance, according to the Castilla y León 112 service. The troops had to rescue the bodies that had been trapped in the car. Both the truck and especially the car have been practically destroyed by the impact. The family comes from the Segovian municipality of Cuéllar, whose mayor, Carlos Fraile, has decreed a day of official mourning. “The flags of the town hall will fly at half-staff as a sign of the pain of the town for the two deceased. A minute of silence will be observed as a sign of sorrow for the death of the two residents of this Villa, during the court contest that will be held in the bullring, today, ”says the statement released by the City Council.

See also  Gasoline and diesel prices in flight, on the highway around 2.5 euros per litre

Spokespersons for the government delegation in the community indicate that the highway was closed around six in the morning “to rescue the truck involved.” The road was reopened to traffic at half past seven, once the operation was over. The night hours of the event and the work of the Civil Guard, which controlled traffic and allowed the passage in turns in each direction, has avoided more retentions due to the accident. More than 200 people have died this summer on Spanish roads, figures that exceed those of the summer of 2021 and that are already approaching pre-pandemic levels.

The two fatalities increase the data on deaths caused on the national N-122, which runs horizontally through Castilla y León between the border with Portugal until it reaches Aragón. The citizen platform A11 steps, from Peñafiel, regrets what happened on a route whose danger they know well. “After 25 years projected, the fact that the national highway-122 has not yet become the A11 highway is at least a guilty conscience for our leaders, not to mention a crime. This national backbone of the east-west peninsula and thousands of heavy vehicles and special vehicles that coexist with cars pass through it. It is a time bomb that unfortunately explodes many times”, they affirm in statements to EL PAÍS.

In the last 30 years some 600 people have lost their lives on this route, which has historically been claimed as a dual carriageway both for security reasons due to the high level of danger on the road and for logistical and transport reasons. Barely a third of what would be the A-11 motorway is enabled for circulation and many towns, as is the case of Peñafiel, see how hundreds of heavy vehicles, in addition to ordinary cars, cross the small towns located next to the highway. The delays in the awards and conditioning works of the n-122 are constant. Soria and Zamora, largely crossed by this national province, are the provinces with the highest average number of deaths in accidents per million inhabitants in Spain.

Amazon could be in the process of acquiring EA | Atomix