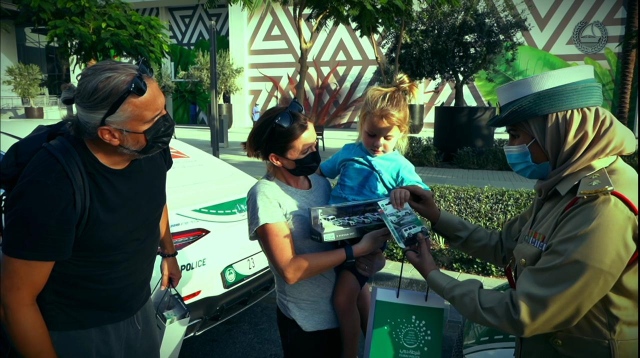 A European mother residing in Dubai realized her four-year-old son’s passion for the police, and his attachment to the Dubai Police in particular, so she decided to take an exceptional initiative and contact the Rashidiya Police Station, and explained her son’s feelings, and asked about the possibility of him getting a tour of a luxury patrol, and the center responded to her request He achieved the child’s wish in cooperation with the Tourism Police Department of the General Department of Criminal Investigations and Investigations.

The director of the center, Brigadier General Saeed Hamad bin Sulaiman Al Malik, said that the Dubai Police General Command provided a luxurious patrol for the child and accompanied him on a tour of the various regions of the Emirate of Dubai, which makes him feel happy, pointing out that the child has toys and games for the Dubai Police because of his intense passion and love for the police.

For her part, the child’s mother said that her son, Ryan Noblet, has a great passion and love for the police, which prompted her to contact the Rashidiya Police Station in order to achieve his wish, and she found a serious welcome, expressing her appreciation to the Dubai Police for its keenness to make her child happy, and to leave a positive and wonderful impact on his life.

The best save of the week in the Premier League