A dilapidated structure on a subway line engulfed in controversy 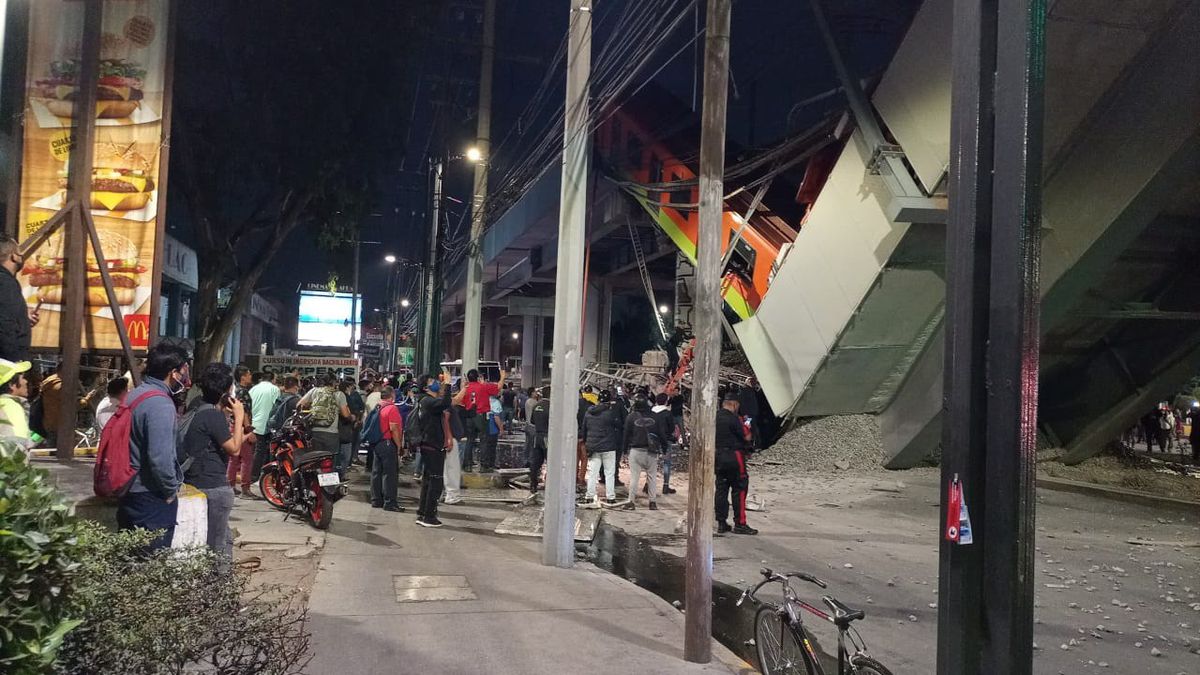 The structure that collapsed on Monday night in Mexico City and caused a tragedy with at least 15 deaths and more than 70 injured had been repaired in January 2018 by the capital’s government, during the administration of Miguel Ángel Mancera. However, residents of the place had denounced six months ago the poor condition in which it was found since the deterioration and progressive buckling of the structure was visible. After the September 2017 earthquake that shook Mexico City, column 69 that supported one of the sections of line 12 was damaged at the base and the Collective Transportation System (SCT) ordered its repair for which it invested three months of work and 15 million pesos, as revealed by the authorities in January 2018.

According to the technical report released at the time, the repair included “shoring of beams, injection of high-resistance resins, placement of additional reinforcement and the extension of the column section in the maximum effort zone, as well as its reinforcement with carbon fiber.” , says the text made public by the Mancera administration during the repair of the column in the Nopalera-Olivos section. The statement makes express mention of the modification of “two structural elements (beams) damaged in September 2017.” The head of the STC Metro at that time, Jorge Gaviño, added that “in addition” all the columns were checked with X-rays, with ultrasound, to review the conditions of all the structures. “

Some 15 million pesos were invested in the works, which were paid for by the companies Carso, Construcción de Obras para el Transporte, Colinas de Buen, TOSO and Systra, which were in charge of the rehabilitation of line 12. “It was a collaboration agreement between the Metro and the companies that built the line. We could have solved it with insurance, because the entire System has insurance, but the companies took responsibility as soon as they found out about the problem caused by the earthquake, ”Gaviño told reporters. However, just six months ago, in October 2020, residents of the area wrote on Twitter. “Apparently the subway structure at the height of the Walmart San Lorenzo Tezonco is unleveling. Personnel are appreciated making the pertinent evaluations ”, together with a photo of the level crossing with a clearly marked curvature.

With 20 stations and more than 11 kilometers elevated, line 12 is once again the great headache for the City Council of the capital. During the administration of the current chancellor, Marcelo Ebrad (2006-2012), then as leader of the Party of the Democratic Revolution (PRD), the construction of this line was involved in a corruption scandal that affected more than 30 officials. Inaugurated in 2012, on the edge of Ebrard’s term of office, just over a year later the operation was suspended by the new mayor, Mancera, citing a series of irregularities and defects that put passengers at risk.

The controversy was a serious blow to Ebrard’s career. His upward trajectory was cut short after that. In 2015, he broke into the Chamber of Deputies, loudspeaker in hand. He wanted to be heard in a session of the parliamentary commission that was investigating the use of 26,000 million pesos of budget, almost 50% more than the planned amount, in an operation in which large companies such as the Mexican ICA or the Spanish CAF were involved.

The investigation was ultimately in the hands of the Federal District Comptroller’s Office, which found up to 33 officials responsible for irregularities in the construction process. Specifically, he pointed out the former director of the Metro Project, Enrique Horcasitas Manjarrez, for delivering the works without completion and not properly supervising the public servants who were under his command. Horcasitas was sentenced to 20 years of disqualification from holding public office. Already in 2017, the consortium in charge of the construction was sentenced to pay a fine of 2,121 million pesos for delays, not executed works, and damages in the construction.

Ebrard, who was not convicted in any instance, accused the political coup. In 2015, an electoral year, he did not even get a position as a substitute deputy in the PRD. Bordered by his party, Ebrard left the country and took refuge in France and then in the United States. When he returned to Mexico for almost three years, he defended himself saying: “I am the only politician who had friendly fire and enemy fire.”

Fernando Coca Meneses, author of the book Golden Line on corruption on line 12, thus summarizes the scandal that hit the management of the left-wing government in the capital. “First they told us that it was a problem with the layout, then that it was the tracks, then the wheels, then that the tracks and wheels were not compatible and then that the pillars on the line did not support the floor of the trains. Finally they went to the financial issue and finally to corruption, “Coca Meneses summarized on Twitter. “It was a poorly designed and worse executed operation,” says the journalist about a work that on Monday night showed its most painful face as the greatest tragedy in Mexico City since the 2017 earthquake.