A comprehensive update of the dialysis centers in Al Dhafra 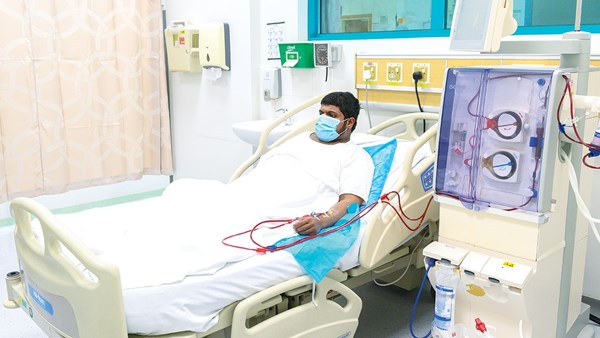 Dr. Haifa Al-Nahdi, Executive Medical Director of Al Dhafra Hospitals, indicated that the dialysis centers of Al Dhafra Hospitals are witnessing continuous modernization to provide the latest international medical devices in the field of dialysis, as 41 of the latest international devices have been provided in the six Al Dhafra centers, in order to serve patients in all cities Al Dhafra Region, next to a distinguished medical and nursing staff, scientifically and practically qualified in this field, adding: The number of doctors working in the dialysis centers is 3 doctors in addition to qualified cadres in the field of hemodialysis, and the kidney centers in Al Dhafra provide many medical and therapeutic services to patients, In addition to hemodialysis operations, including: conducting periodic checks on a monthly basis, including blood pictures, kidney function, bone salts and parathyroid hormone, to ensure the integrity of the bones, in addition to conducting liver virus tests to prevent transmission of infection, and sugar tests.
Al-Nahdi confirmed that dialysis operations are carried out in accordance with the highest standards of safety and security and in accordance with preventive and precautionary measures to prevent the transmission of any infectious or viral diseases between patients, and in a manner that guarantees the safety and security of all patients, as well as the technical, medical and nursing personnel in the dialysis centers.

Center in every city
The Executive Medical Director of Al Dhafra Hospitals said that the Kidney Center at Madinat Zayed Hospital is one of the first kidney centers in the region, which was inaugurated in June 2003, and used to serve patients in the entire Al Dhafra region, before the kidney centers were expanded to be provided in all cities in the region. By a specialized center in each city.

Successful cases
Dr. Salahuddin Khalil mentioned that hemodialysis operations are not limited to a certain age, as the youngest patient is 20 years old and performs regular and successful dialysis operations, and there is another patient who is 88 years old and has been doing dialysis for more than 15 years. : The kidney centers witnessed normal pregnancies and births for a number of dialysis patients, as the number of successful pregnancies during the last period reached 3 pregnancies, in addition to 3 natural births and normal children of women performing hemodialysis without any complications, and there is also another pregnancy case now. In the seventh month, her condition is stable and good.
He explained that renal failure is of two types: the first is an acute type that can be cured, and the other is a chronic type that can be coexisted with, which is five stages. A person needs compensatory treatment in the fifth and final stage only, that is, when the kidneys’ functions are less than ten percent or even six percent and not before. That, and the treatment available is either dialysis or kidney transplantation, and a person lives normally when he receives treatment properly and under medical supervision.

Cade Cunningham, the possible No. 1 in the draft compared to Doncic