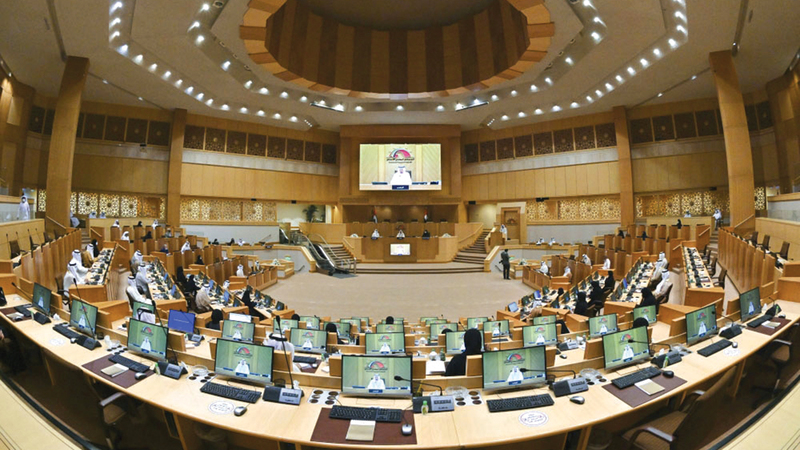 The Social Affairs, Population and Human Resources Committee of the Federal National Council presents a recommendation to establish a center to monitor phenomena alien to Emirati society, to study them and develop a mechanism to confront negative ones, and to conduct research as a reference for legislation.

The committee’s rapporteur, Hind Al-Alili told “Emirates Today”: “The recommendation to establish a center to monitor phenomena extraneous to society came within 15 recommendations that the council will discuss in its session tomorrow, on the challenges facing the family, including those related to people of determination, and preparing housing for them, Including shelter centers such as the Sheikh Khalifa Center for Community Care in the Emirate of Umm Al Quwain and how it is being developed and rehabilitated again, and the development of application programs in which institutions cooperate together to protect juveniles.

She pointed out that the committee presented two general topics for societal discussion, namely “family cohesion and cohesion”, and “social security”, which focuses on the mechanism for developing social security.

She explained that the recommendation to establish a center to monitor phenomena extraneous to Emirati society was demanded by a large number of community members, who spoke about the necessity of having an authority responsible for confronting these phenomena, and at the same time it should be a research body that prepares studies and research, and presents them to those responsible for legislation, so that Decisions and laws on any social issue are based on appropriate community studies.

The center monitors the phenomenon, and presents it to a group of specialists, consisting of representatives from different sectors, including the financial, social, psychological, legal, legislative and all related disciplines, with the aim of filtering, evaluating, analyzing and providing solutions to them, and developing a plan to confront it if it is a negative phenomenon on society.

Al-Alili stated that a number of negative phenomena were monitored in various social aspects, including those related to marriage, noting that “the most prominent negative phenomena in the aspect of marriage that have been monitored are the wife’s dependence on her family more than on the husband, and she is trying to erase his role, as well. Another phenomenon is clearly prevalent, as in many cases of divorce, a severe conflict arises between the separated spouses over child custody, whose negative repercussions affect the son or daughter, not the father or mother, as the interest in him is not as much as the interest in provoking intransigence between the spouses, and which one can harm the other.”

Among the phenomena that have been monitored is “domestic violence”, although the number of its cases is few in the UAE due to the great role played by the community police, “Aman” and other institutions that serve this aspect of the family.

She pointed out that the committee will submit a proposal for discussion under the dome of Parliament, about offering additional courses, in which the person who is about to marry is obliged to take them to obtain a marriage grant, so that it is not limited to discussion about the importance of marriage, but includes how to deal with spouses and preserve the family, in addition to a course on « Divorce”, in anticipation of the spouses reaching this stage, and then they must reach a “peaceful divorce”, stressing the importance of culture and awareness, through courses offered by specialists from social counselors licensed by the Ministry of Community Development so that he can train and rehabilitate those who are about to marry with high efficiency.

Al-Alili pointed out that “the Marriage Fund is currently deciding a number of training hours as a condition for obtaining a marriage grant that is given to a citizen who earns a salary of 25 thousand dirhams at least, and we are working on making a recommendation about increasing the upper limit of salaries due to the grant, to be discussed in the council’s session. Federal National tomorrow.