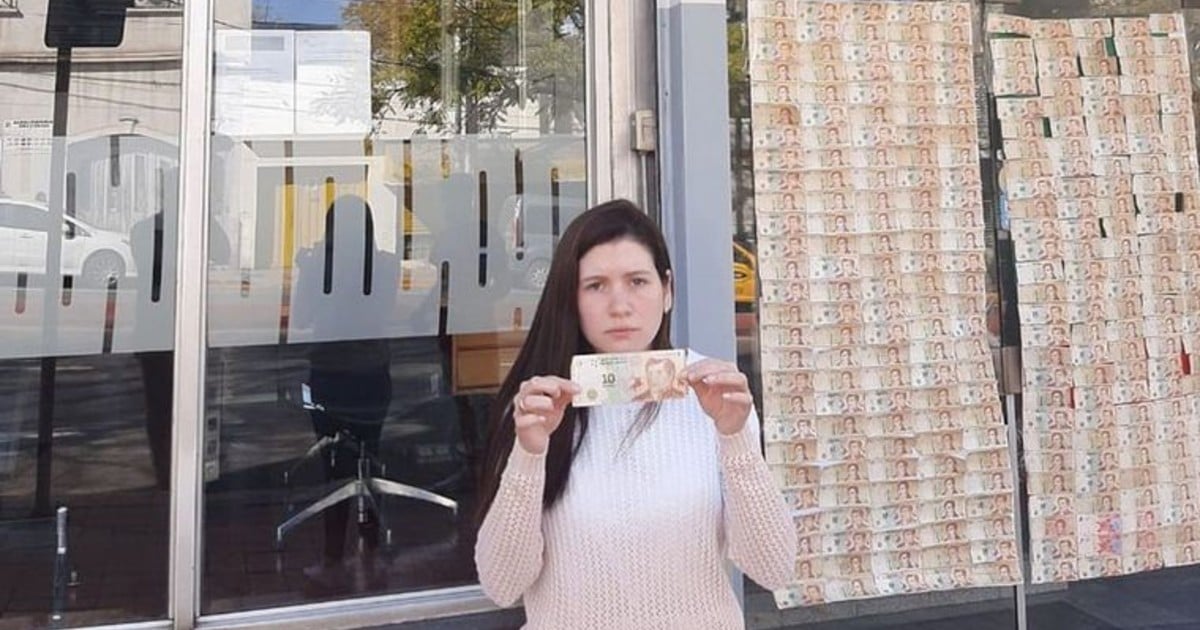 Coordinator of Youth within the evangelical party A New Opportunity (UNO), Fiona cavazzon She is a member of the “Sumar” front as a candidate for national deputy in the Juntos por el Cambio intern in Córdoba. In the last hours a video went viral in which wallpaper the doors of Banco Nación with bills to show the effects of inflation.

Cavazzon published a recording on his social networks in which he shows how he upholstered the doors of the Banco Nación de Córdoba with papers of 10 pesos. “I glued more than 270 bills to cover the two doors of the bank to show what causes inflation,” the young woman starts.

He quoted a tweet from the economist Manuel Adorni and remarked: “It is cheaper to wallpaper a wall of your house with $ 10 bills than with vinyl. It is a graphic and brutal way of showing how the Argentine peso is losing more and more value. “

The fifth candidate for deputy of “Sumar”, the internal line of JxC Córdoba, added: “The calculation is more or less as follows: 5 square meters of vinyl cost approximately $ 5,385. Instead, 5 square meters of $ 10 bills are $ 5,100“.

Fiona Cavazzon, a candidate for national deputy, covered the doors of Banco Nación with $ 10 bills.

From the door of one of the branches of the Banco Nación de Córdoba capital, he concludes with a forceful request: “I ask you that this September 12 let’s get this government out of all sides“.

The evangelist party that is part of Cavazzon this week issued a press release criticizing the series “El Reino”, considering it “a fiction that intentionally stigmatizes the evangelical churches in Argentina.”

“The abundance of bad examples, such as the poor performance of the director of the Inadi, the vip vaccinated, and the birthday in Olivos, are the antipodes of the message that evangelicals transmit day by day with our actions. From our party, we encourage to the political participation of the evangelicals so that they occupy places of decision and form part of the Argentine institutional life “, maintain the evangelists. Words to which the now viral candidate subscribes.

A ballot is the one headed by the president of the JxC interblock in Deputies, Mario Negri, and which he carries as a running mate for the Senate, Soher El Sukaria. For deputies, the first on the list is Gustavo Santos, former Minister of Tourism of Mauricio Macri, and also Soledad Carrizo, Ramón Mestre and Gregorio Hernández Maqueda, among others. This ballot has the support of former President Macri.

In addition, there is the list headed by the Cordovan deputy Luis Juez, who is running for the Senate with the list “Changing Together”, and who raised the tone to the intern by declaring: “There is not a fucking senator who is encouraged to stop Cristina”. The judge has the radical Rodrigo de Loredo as the first candidate for deputy and the former Macrista referee Héctor Baldassi is also on the list.