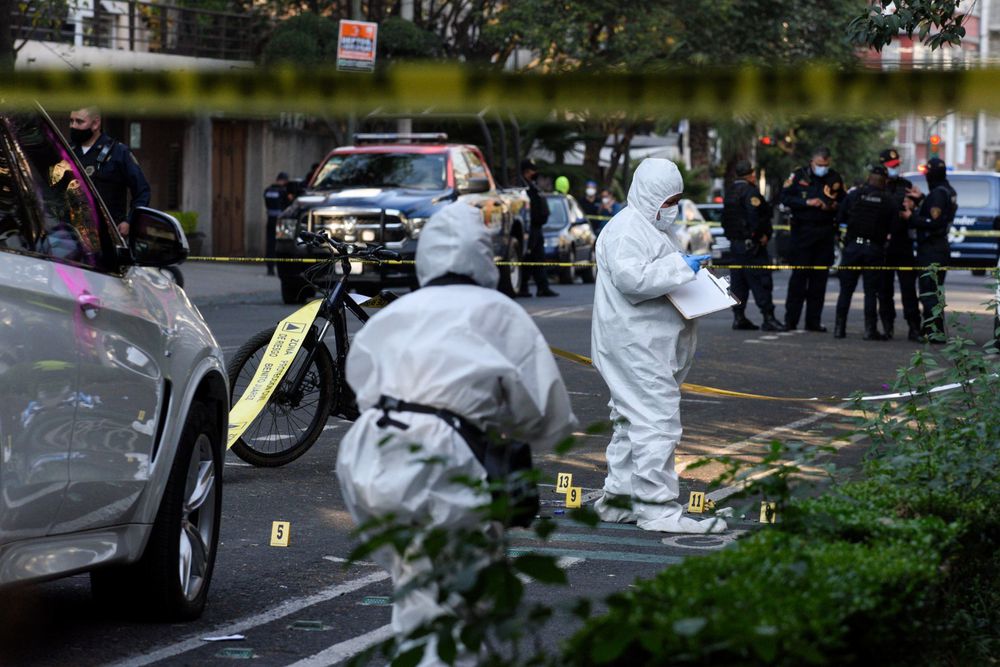 The president of the International Council of Entrepreneurs (Coine), Martín Rodríguez, was assassinated on Friday afternoon in one of the most important financial and commercial areas of the Mexican capital, the Naples neighborhood. The shooting also killed his bodyguard, who was a bank police officer, and shot a woman who was admitted to a hospital. The shooting in broad daylight and in one of the busiest areas of Mexico City puts once again the focus of violence that does not give truce in the capital. In November, another hotelier, Baptiste Lormand, was killed and his body dumped in a ditch on the outskirts of the city.

Rodríguez was leaving a gym on Dakota Street when a motorcycle with two armed men intercepted him, authorities have reported. His bodyguard, David González, who was also an agent of the bank police —— in charge of guarding public establishments — tried to respond to the shooting and was also riddled with bullets. “There was just a shooting here in Naples for Dakota and Georgia and I’m almost crying from the scare. There was a girl who hit a stray bullet. I couldn’t open my apartment because I was shaking, something like this had never happened to me and I’m from Sinaloa, ”a neighbor from the neighborhood told Twitter.

Rodríguez was shot in the skull, abdomen, and femur; his escort in the pelvis, left femur, back and left arm. The police have counted more than 25 shells in the middle of one of the busiest streets in the colony and in broad daylight. At the moment, there are no detainees. The armed men fled.

The businessman, in addition to leading the Coine, has participated in commissions of the federal government, the Congress of the Union, the Secretaries of State and the boards of directors of different companies, according to his LinkedIn work profile. A few weeks ago, in an interview for the newspaper Reforma, he detailed a report from his agency on the drop in the country’s exports.

CEO of an important consulting firm specialized in accounting, tax, financial, legal and business matters; Partner of a global network of law firms, opinion leader in business matters, philanthropist and fervent defender of regional economic growth.-Participant in committees of the Federal Government, Congress of the Union, Secretaries of State and multiple national and international business organizations, as well as boards of directors, company directors and in a global organization of law firms.-Member of honor in the reception of multiple missions of the delegations of businessmen from different countries of the world; Among which are the United States, the United Kingdom, Argentina, China, Russia, Guatemala, the Philippines, Sudan and Tunisia, to name just a few.

Mexico City, until a few years ago considered one of the few corners of the country where violence did not hit its inhabitants with the same virulence, has seen the number of murders grow to reach a record for homicides in 2019. In that year, between four and five people were murdered per day, according to information from the Ministry of the Interior (Interior). The highest level of homicidal violence in the capital in more than two decades. The situation during 2020 has been similar, with figures of more than 1,240 murders, around four a day.

The security of the capital has become for two years one of the priorities of the Government of Claudia Sheinbaum – of the same party as the president, Andrés Manuel López Obrador. The fight against organized crime, led by local police chief Omar García Harfuch, a veteran of the war against drugs at the national level under Enrique Peña Nieto, has materialized in the arrests of local bosses in the last year. Although the brutal attack against him in June and the worrying numbers of homicides in the city once again put one of the pending matters of this Administration on the table.

Navalny has to go to a prison camp: shortly after the verdict, the next court hearing for the Kremlin critic is pending