A 4,000-year-old tablet is the oldest map in Europe 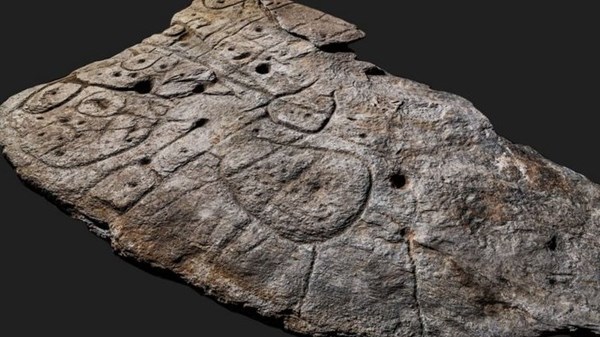 A recent study concluded that a Bronze Age rock plate discovered in 1900 in western France is the oldest map in Europe. Archaeologist Evan Payet, one of the authors of the study included in the Bulletin of the French Society for Prehistoric Studies, noted that the 4,000-year-old piece, known as the Saint-Bellec tablet, is engraved with marks representing part of the Montenegro region in western France. “Today it is the oldest map of a region in Europe,” he said, adding, “You can see on the panels sculptures that at first glance seem incomprehensible. You have to look carefully to begin to understand how the decorations are organized and structured and how they are linked to each other through lines.” Archaeologist Paul de Chatelier discovered the tablet in an ancient cemetery in the Finistère region in 1900, before it was stored for decades on a property belonging to him. It was necessary to wait until the year 2017 for the launch of scientific studies on the rock, which is 2.2 meters long, 1.5 meters wide, and weighs nearly a ton. The researchers said the repeated motifs associated with lines represent an area 30 km long and 21 km wide and may indicate ownership of the land that belonged to a prince or king. “If we can decipher what these symbols mean, then we will know what the map represents,” Bayet said, pointing out that the tablet raises many questions. “Can we continue to talk about societies where writing did not exist and about prehistoric times when we see that they were able to produce a map with a caption?”